The Workman’s Friend: Fish and Chips and More

After months of anticipation, a popular nightlife neighborhood gets an Irish spot 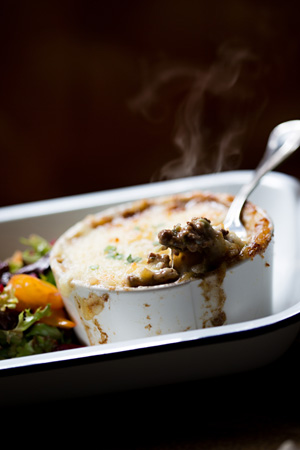 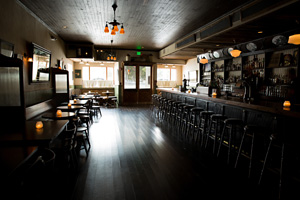 Top: Lynn’s Shepherd’s Pie is an authentic taste of Ireland.

FOR MONTHS, brown paper covered the windows of the building on the corner of Thomas Street and Central Avenue in Plaza Midwood. Construction crews came and went, and whenever they opened the doors, passersby tried to steal a glance at what was inside. When The Workman’s Friend—a pub by the owners of Dandelion Market, Connolly’s, and Tyber Creek— finally opened, what was inside looked as though it had been there for decades. Rustic brass light fixtures, walls that appear as if they’ve been wallpapered and forgotten, and reclaimed wooden boards on the ceiling help to create the environment of a classic Irish pub. A long bar seats those who pop in for drinks and a snack, while tables line the opposite wall and continue to the back of the narrow restaurant. A hallway leads to an outdoor patio, with picnic tables that make for a comfortable outdoor dinner on a nice evening, or a space to bring your drink while you wait for a table inside.

The Workman’s Friend helps diversify Plaza Midwood’s increasingly crowded nightlife options. The beverage list has cocktails that range from the not-too-sweet “A Fine Thing,” with prosecco, lavender honey, and lemon, to the namesake drink that takes a traditional Irish whiskey, Jameson, and lightens it with a hint of vanilla. The top row of the liquor shelves behind the bar are home to a lineup of Irish whiskeys, and you’ll often hear “I’ll take a Guinness” coming from the bar.

The menu brings together classic Irish pub fare with what’s trendy, keeping authentic Irish dishes while also giving regular visitors other options. Start with a cocktail and a cheese and charcuterie plate, then ease into more substantial small plates throughout the evening, such as the goat cheese and beet tower or brisket sliders. A must-order is the fried, pickled okra, a heap of crunchy okra bites served with a chive buttermilk dipping sauce. It’s a tart take on a Southern dish that holds the okra’s flavor but keeps it from being tough.

Of course, the restaurant has fish and chips. Here they’re light and crisp, served with fried potato wedges tucked inside a bag. Each entrée we order comes on a metal tray, and the peas served alongside the fish and chips are contained in a small mug. The shepherd’s pie, a medley of lamb, beef, and vegetables topped with mashed potatoes, is hearty and tender, and is reasonably priced at $15. But other items on the menu, such as the lamb frites or salmon, come with prices of $24-$25, a rather expensive entrée for the working man. That’s not to say they aren’t worth ordering, though—the lamb is tender, and for this presentation, the fries come without a bag.

As we sit for our dinner, we’re interrupted by familiar faces walking through the door of this restaurant that feels like a home. We say hello, share advice on the drink menu, and, later, give a wave before heading out that same door. That’s how it is when you’re among friends.

This article appears in the September 2015 issue of Charlotte magazine.
Categories: By Kristen Wile, Food + Drink
Contest of the Month