Kindred was a semi-finalist in last year's awards, but did not advance to the finalist category. His Davidson restaurant, which he runs with his wife, Katy, is known for both incredible service and consistently delicious dishes, as well as a deep cocktail program. We named the Kindreds Charlotteans of the Year last December; you can read that story here. They've also been named on many national best-of lists, including in Bon Appétit.

Joe and Katy were working out at their local YMCA when Joe got a text from another chef saying congratulations. He paused his workout to look at the list, still wearing his weighted vest, and went right back at it. This year, they know a bit more about what to expect.

"The first time it happens, you're like, 'Oh my gosh, this is amazing,' you know? Then this time, I'm like, 'This is amazing,' but I think you learn the stiff competition you're up against. It's insane," Kindred says. "We're just pumped to be recognized again, and I told the team today, this is not about me, it's about them and what they do day in and day out." 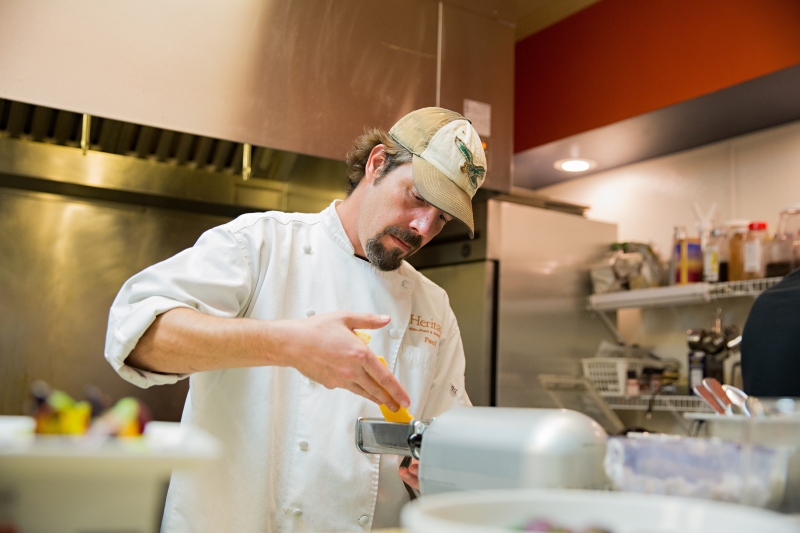 Waxhaw's Heritage Food + Drink is something of a surprise on the list, not because it's undeserving, but because the restaurant has gotten far less press than Kindred. It was such a surprise that Verica didn't realize he'd made the list until he checked his phone and found it flooded with congratulatory text messages. He immediately called Ashley Boyd, who oversees the dessert program at the restaurant, to ask what was going on.

"Wow. Just, wow—totally, totally just f—–g blown away," Verica says. He hadn't even looked over the list yet when we spoke this morning, but we can confirm he is, indeed, on it.

Chef Verica's dishes are ingredient-focused, and sourced as often as possible from local farmers. His innovative flavor combinations and presentations add to dishes that are always cooked with textbook technique. Heritage was the top restaurant on our 2016 50 Best Restaurants list.

"I'm really excited for Paul to be on the list," Kindred says. "I know how hard he's been working."

Having multiple restaurants on the semifinalists list should help Charlotte's chances at bringing home an award. The foundation started releasing the contenders in order to allow its judges time to visit them. Judges cannot vote in support of a restaurant unless they have eaten there. Winners will be announced March 15.

This article appears in the February 2017 issue of Charlotte magazine.
Categories: #discussclt, DiscussCLT Conversation, Food + Drink
Contest of the Month