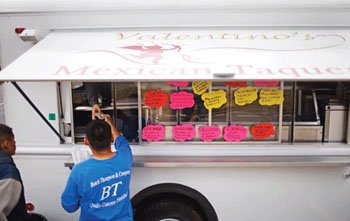 I spotted the taco truck parked behind Valentino's, so I made a quick U-turn, because I love a good taco truck. I know a lot of people who are afraid of these trucks, which brings up the most important factor in great dive exploration: Don't be such a wussy.

These trucks serve all kinds of fast, inexpensive food. Of course I always give it the once-over to make sure the truck is clean and well maintained. (Food trucks are regulated by the city, but barely.) This one had a superclean grill. It serves little tacos filled with beef, chicken, or chorizo for $1.50. They are small but good. The best and most authentic thing to buy from this truck is a torta. These big, hot Mexican sandwiches put those chain store subs to shame. A torta is kind of a combo between a sub and a Philly cheese steak. The bread is the key. It's a seven-inch roll called a bolillo. It has a firm crust and a chewy center. I ordered the Pachuquéna Milanesa, which is a thin slice of breaded beef with mayonnaise, sliced tomatoes, pineapple, white cheese, and onions. I wolfed it down. This was a big, pleasant surprise to me. I'll be eating a lot of tortas from now on.

The owner is trying to get a permit to park his truck uptown, so if you see it, put on your bathing cap and dive in!

This article appears in the March 2008 issue of Charlotte magazine.
Categories: Feature, Food + Drink, Restaurants & Food
Contest of the Month