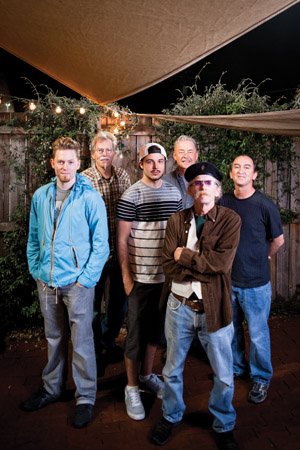 You can’t talk about The Lenny Federal Band without mentioning The Comet Grill, the Dilworth dive where they hold court each Friday night. Make your way through the smokers standing outside, duck through the front door, and you’ll find yourself next to the makeshift stage. On the wall is an old photograph of Federal looking like a young Kris Kristofferson. He even sounds like Kristofferson. The rough, road-weary voice is part of the persona. So is the long, gray ponytail.

On one recent Friday, the band, whose core members are Federal and John Wicker on guitar, Mahlon Thomas on bass, and young Johnny Wicker on drums, opened with Alan Jackson’s “Mercury Blues.” It was nearly 11 p.m., and from the first note, most everyone sang along. The amiable babe of a bartender shook her hips in time.

The harmonica-heavy jams included “Friend of the Devil,” Otis Redding’s “You Left the Water Running,” a couple of bluesy train songs, and the oft-requested “Tupelo Honey.” It’s tradition for Wendell, a long-time fan, to sit in on lead vocals for that one.

Federal doesn’t hog the makeshift stage. In fact, if you don’t know which one he is, you’ll have a hard time picking him out of the lineup. This is a band of equals. The mellow Federal is probably in the corner, tapping his foot to the beat, effortlessly strumming his guitar, scanning the appreciative crowd from behind dark glasses.

The band doesn’t confer or offer any rehearsed banter between songs. They just jam. —Page Leggett

UNC Charlotte professor Jay Morong led the formation of this offshoot of the Charlotte Film Society. The series, held once a month at CrownPoint Cinema, appeals to a younger—and, with all respect, weirder—demographic. Who’d have thought Norwegian Ninja and Hobo with a Shotgun could sell out in Charlotte? But, month after month, movies like that do. BAFS is proof that Charlotte’s quirkier than most people realize.

Charlotte hasn’t had a true jazz club for years. Thankfully, once a month, the Bechtler’s lobby is converted into one. These concerts, which are free with museum admission, are usually at or near capacity, and the music is the star. On the first Friday of every month, Charlotteans have access to an authentic uptown jazz club, but without the smoke and with better art. In July, look for the sultry Maria Howell.

Pity we don’t get to see more of him. He calls Charlotte home, but since the Queen City isn’t hospitable to professional actors, Smith’s home stage since 1997 has been the People’s Light and Theatre in Philadelphia. The Davidson alum, who’s been in nearly 200 plays and ten films, has spent thirteen seasons with the N.C. Shakespeare Festival. He played King Lear last August in Collaborative Arts’ local production, and it was a performance for the ages. 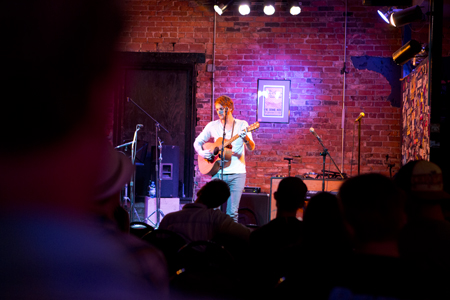 If you want to hear—really hear—good music, this NoDa institution is without equal. No other Charlotte venue gives you such close access to performers. Musicians may have a beer with you before or after the show. Performers love the place for the great acoustics; music lovers go for the intimacy. Nashville’s Bluebird Café has become famous for being a “listening room” where patrons will “shh” each other if there’s talking during the show. The Muse is Charlotte’s Bluebird.

She’s Charlotte’s answer to Meryl Streep. When Adkins is in a show, you know she’s going to steal it. Her Violet Weston in CAST’s August: Osage County was a bravura performance in a riveting family drama that was epic in scope and length. Anyone who can convincingly go from Eleanor of Aquitaine (CPCC’s The Lion in Winter) to Southern Baptist Sissies (Queen City Theatre Company) deserves a standing ovation.

The professional dancer (and hairstylist) had never acted professionally until he was cast as Angel, a transvestite with AIDS, in Charlotte’s first local production of RENT. But Alicea wowed sold-out crowds at Theatre Charlotte night after night in a role that could’ve looked silly and maudlin in less capable hands. As the emcee in CPCC’s Cabaret this February, he was the main reason to see the show.

Like the artist herself, Dowell’s palette is bold and confident. Abstracted urban landscapes, in all their gritty glory, are frequent subject matter—Dowell can make a fire escape look like a thing of beauty. You can see the former McColl Center resident’s work at the Ritz Carlton’s BLT Steak, Soho China Bistro, and a slew of boutiques around town. She’s also had shows at galleries in Seattle, New York, and West Palm Beach.

ART EXHIBITION YOU MAY HAVE MISSED … BUT STILL HAVE A CHANCE TO SEE: Stephen Hayes’s Cash Crop at the Gantt

Bearden got all the fanfare, but this show about slavery—including the kind that continues today (think materialism married with forced labor)—will leave a more lasting impression on its viewers. The installation of life-size sculptures of Hayes’s friends and family members encased in slave ships is arresting and evocative. Hayes, a Savannah College of Art and Design alumnus, is a rising star.

This article appears in the May 2012 issue of Charlotte magazine.
Categories: BOB Awards, Feature, News & Features, The Buzz
Contest of the Month