After 15 years bringing UNCC and Charlotte closer, he steps away after guiding the university through the worst of times 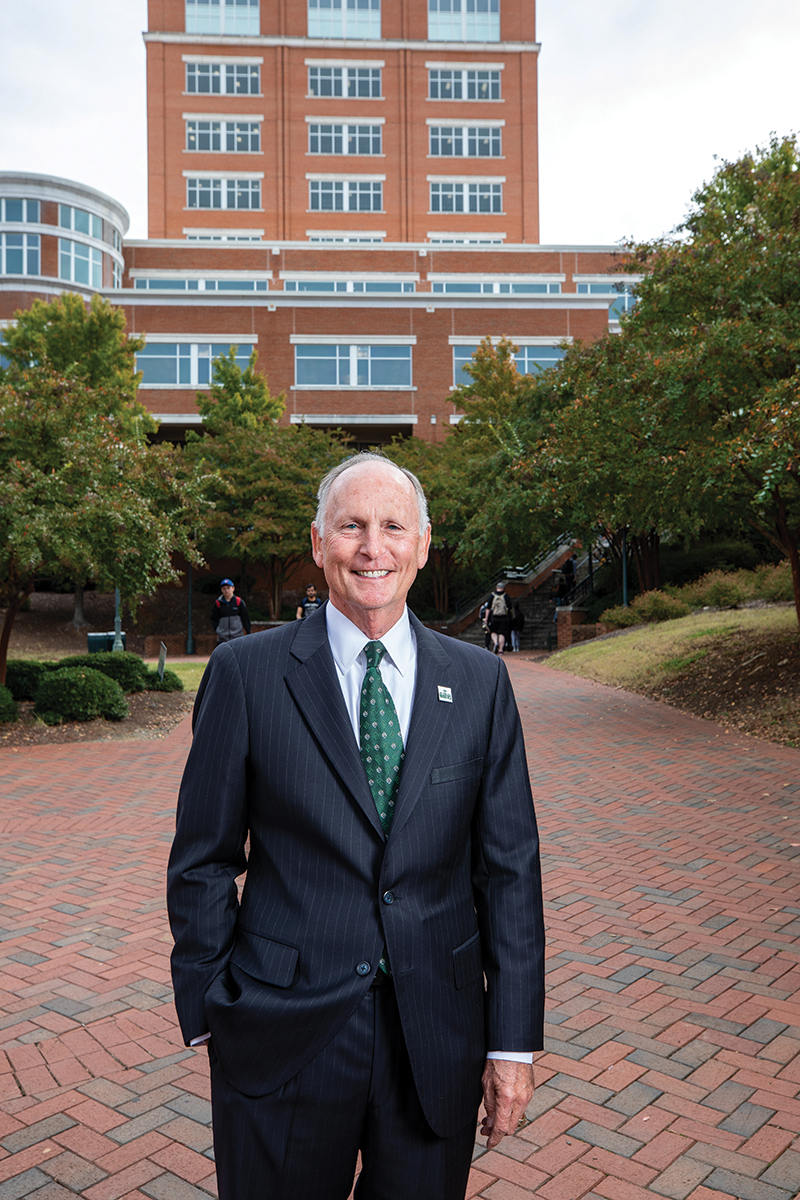 TWENTY-FOUR HOURS and 38 minutes after a gunman killed two UNC Charlotte students and injured four others, Chancellor Philip Dubois stood behind a microphone on a stage in the center of Dale F. Halton Arena and cried.

“As parents ourselves…” He sniffled and braced himself, hands resting on each side of the lectern. “Lisa and I grieve this senseless loss of young life and share in the anguish of their parents, their families, and you, their friends.”

Dubois looked around the auditorium—a room with more people than seats, rows and rows of students, faculty, and alumni wearing green. “We can’t bring them back,” he said. “But with your help, we will find a way to remember their presence as 49ers.”

The day before—on April 30, the last day of class—he was on a flight to Indianapolis for a meeting of the NCAA Division I Board of Directors. The quarterly gathering pulls university heads and board members from across the country, including Dubois, the longest-serving chancellor in the University of North Carolina system and an administrator responsible for a student population of 29,710—the second-largest total enrollment in North Carolina, behind only N.C. State.

When he accessed American Airlines’ onboard WiFi, he glanced at UNCC’s website and saw a message: “Run. Hide. Fight.” It’s the signal campus security sends via text and email in the event of an active shooter.

Dubois gathered what little information he could from emails with his senior team and his wife, Lisa Lewis Dubois. He took the next flight back to Charlotte, where police escorted him to a press conference in the parking lot of a shuttered O’Charley’s on University City Boulevard.

For the next 24 hours and in the days that followed, Dubois moved between vigils and press briefings. He attended funerals and visited injured students in the hospital. At the commencement ceremony on May 10, he presented degrees in memoriam to the families of Ellis “Reed” Parlier and Riley Howell, the two students who were killed.

Just two months later, Dubois announced he would step down at the end of the next academic year. In his 15 years as chancellor, Dubois, 69, was instrumental in efforts that helped bridge the cultural and physical gap between UNC Charlotte, 10 miles northeast of Trade and Tryon, and its host city: the LYNX light rail’s expansion to University City, a 43 percent growth in enrollment, and the establishment of a football program in 2013.

But it was Dubois’ response on what he called “the saddest day in UNC Charlotte history” that cemented his influence on both. “Someone asked me the other day, ‘How do you compartmentalize yourself so you can lead?’ And the answer is, ‘You don’t,’” he tells me in his Cato Hall office on campus. “You have to be clear-thinking as best you can. But being emotional about a violent death of students is the appropriate reaction. It comes naturally. It comes to everybody.”

PHILIP DUBOIS GREW UP in Cali­fornia’s Bay Area. His father, Fred, served as a Navy yeoman during World War II; when he returned, he worked as a newspaper reporter and columnist for The Oakland Tribune and later, in public relations and air traffic development. His mother, Germaine, worked as a legal secretary and wanted Dubois to become a lawyer.

“I wouldn’t have gotten a college degree if I hadn’t gone to a public university because my family was very middle class,” he says. Dubois, the middle child of three, studied political science at the University of California-Davis and attended graduate school at the University of Wisconsin-Madison. Classes were expensive, though, so before he graduated, he accepted an offer to teach at UC Davis and brought his graduate school sweetheart with him. Lisa passed the California bar and served as a deputy state attorney general in nearby Sacramento.

He taught American government, and while he loved teaching, he wanted to do more. After a few years, Dubois stepped onto UC Davis’ administrative side, where he stayed until 1991, when he accepted a provost position at UNC Charlotte under then-Chancellor Jim Woodward. “(I had) never been in the south,” he recalls. “(Charlotte) was nothing like today. There was no downtown. There was no center city of any consequence.”

His first stint as a college president came in 1997 at the University of Wyoming, in the small town of Laramie. Under his tenure, private contributions quadrupled and recruitment and retention spiked.

He also learned how to navigate tragedy. In his first month as president, a football player died during practice from symptoms related to mononucleosis. In October 1998, Matthew Shepard, a gay student, was brutally beaten and killed; a high-profile trial followed. In Dubois’ second year, a student jumped to his death from the 12th floor of a residence hall in front of fellow students and campus staff. After the 1999 mass shooting at Columbine High School in neighboring Colorado, Dubois dealt with multiple bomb scares. In 2001, five days after September 11, eight members of the men’s cross-country and track teams died in an automobile accident caused by another UW student who was driving while intoxicated.

“I went to five funerals in four days for 19-year-olds,” the father of three says. “I’ve seen more than probably most college presidents.”

NO UNCC CHANCELLOR has served for less than a decade. The average tenure is 13 years, double the national average of six-and-a-half. This is, in part, due to the university’s age; educator Bonnie Ethel Cone founded what would become UNCC in 1946 as part of a national wave of post-World War II expansion of education, and the university has had only four chancellors since. UNCC’s youth has given its chancellors an opportunity that presidents at long-established universities don’t have—space for substantial growth in infrastructure, academic achievement, and enrollment throughout their tenures.

“As important as Davidson, Johnson C. Smith, Queens, Johnson & Wales are in terms of the massive workforce requirements of the region, you have to have a large public university to help with all that,” Dubois says. “There are no great cities without great public universities.”

When the university’s board named Dubois chancellor in 2005, one of his earliest conversations was about the light rail. Then-mayor and future Governor Pat McCrory asked Dubois to consider extending the line to campus. The city needed UNCC—with its large student body, i.e., future riders—to sign on to get enough federal funding for the project.

In 2017, Dubois took one of the first test rides on the Blue Line Extension from Ninth Street Station, near UNCC’s uptown campus, to the last stop, UNC Charlotte Main Station. “I’d say that was the most excited I ever was,” he recalls. “I’d worked on that thing for 13 years, and to get to actually step off the train was really very satisfying.”

Dubois has launched other projects on campus in recent years, including a hotel to open in spring 2021 and an academic building for the sciences, also targeted for 2021. But he won’t be there to see them completed.

Lisa and Philip Dubois are moving to Georgia to be closer to their nine-month-old twin grandsons. When he’s not playing with his new puppy, Bogey, or playing golf, he’ll consult within the UNC system. “I think once April 30 happened, the decision about when to retire just got much clearer in my head.” But, he says, “I needed to be here for this year of remembrance.”

“WELCOME HOME to our home,” Lisa says with a wide smile and a handshake. A gust of wind catches her blonde hair as another guest walks into the Bissell House.

The Duboises have lived in the home—named for the late Sara H. Bissell, a donor and member of the board of trustees who assisted with the interior design—since 2005, when Philip Dubois was named Chancellor Woodward’s successor. Woodward has been a mentor to Dubois for decades and continues to attend events at this house that he had built but never lived in.

Woodward is here on this October evening to celebrate the new dean of the College of Arts and Architecture, Brook Muller. I tell him I’m working on a story about Chancellor Dubois, and before I can finish my sentence, he rattles off compliments. “Oh! Phil has just done a marvelous job.” Woodward beams and glances toward the entryway. “They’re standing at the door greeting everyone, and when their guests leave, they’ll wish them a good night, too.”

Dubois talks with the families of Reed and Riley at least every other week. Together, they’re planning a remembrance concert with the Blumenthal Performing Arts Center and Charlotte Symphony on April 30, 2020, one year after both families lost a son. The ticketed event will include UNCC musicians, dancers, artists, and images of the students who were killed and injured. Christopher Warren-Green will conduct as university alumni sing some of Riley and Reed’s favorite songs, like “American Dream” by Switchfoot and “Mr. Blue Sky” by Electric Light Orchestra.

The start of this academic year was a little rocky, Dubois tells me. Thirty percent more students went to the counseling center in the first few weeks. “I think that was a little bit of pent-up anxiety about coming back,” he says. Around 160 students decided not to enroll after the April 30 shooting—May 1 is “decision day” for a majority of American colleges.

But even more did enroll, Dubois says, including the younger brother of Drew Pescaro, who survived a gunshot in his lower back: “Consider how brave those kids are, that they came back and then brought their younger brother with them.”

When Dubois walked into Halton Arena for the vigil on May 1, he expected a large crowd but was stunned when he saw the standing-room-only auditorium. “That was a powerful moment,” he says. “And we saw that replayed for many, many days.”

Around campus, makeshift memorials appeared. Students stood in semicircles with their heads bowed as the sun set. They placed candles, floral bouquets, and handwritten notes on the steps of Kennedy Hall and the brick pathway near the arena. Dubois and the campus archivist made sure those artifacts, and the countless other notes that arrived in the mail, were collected. “We made those available to the families after the commencement ceremony,” he says, “so they could see the response from the world.”

EMMA WAY is editor of this magazine.

This article appears in the December 2019 issue of Charlotte magazine.