When COVID devastated the food and beverage industry, Upstream’s executive chef used his skills to connect customers with local farmers

Chef Sam Diminich says no two Charlotte farms are alike. Some look pulled from a postcard, while others are backyard plots or even shipping containers. “It’s not Instagram-perfect,” he says of one. “But their bounty is beautiful and delicious, and they’re very, very passionate about what they do.”

Diminich launched his business, Your Farms, Your Table, in late March to connect Charlotteans with these local farmers. He scours markets and farms daily for fresh, seasonal produce and crafts a three-course menu around what he finds. Then he cooks and delivers the $30 gourmet meals to homes all over town. Customers never know what they’re going to get. In the seven months since he started, Diminich has never made the same menu twice.

The business model is so well timed, I would have believed Diminich had it in the works long before the coronavirus. Demand for local food and doorstep convenience long predates the pandemic. But this wasn’t how Diminich’s 2020 was supposed to go at all.

In January, he beat Bobby Flay on the Food Network with a sumptuous lobster risotto, and the SouthPark restaurant Upstream, where Diminich had been executive chef since late 2018, was coming off a jubilant holiday season. “Food, service, management, team, staffing were as strong as they’ve ever been, and we were all very proud of that,” he says. “But COVID had other plans.”

On Tuesday, March 17, Diminich got the email: He was laid off.

With two kids at home, Diminich couldn’t afford to mope. He looked for work at an Amazon warehouse, joining a line that snaked around the building while his 13-year-old son waited in the car. That night, a farmer friend called. “He is desolate,” Diminich recalls. “He has a season’s worth of crops and no place to go. He just lost 25 wholesale accounts.” Afterward, Diminich thought about his friend’s plight: There’s got to be something I can do.

With his sister Stephanie Lockhart, Diminich founded Your Farms, Your Table. At first, customers placed orders via Instagram, and he prepared every meal at his Cotswold apartment. Today, the business has a polished website and commercial kitchen space. (Upstream, meanwhile, announced in June that it wouldn’t reopen post-pandemic.) Diminich’s career has taken so many turns this year that he tells me the story in chapters—but one aspect of his work hasn’t changed. 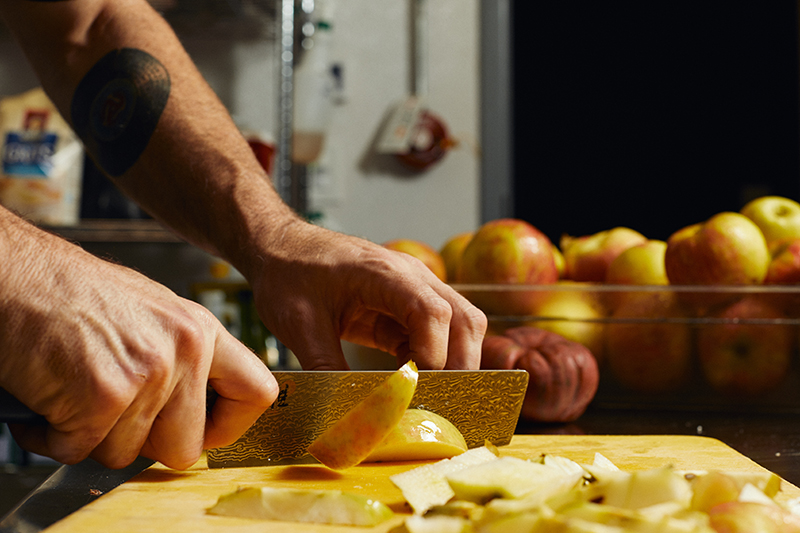 Diminich, 44, says his life began again on November 16, 2014, “my very first day of sobriety.” He knows firsthand the courage and resolve it takes to fight addiction; now, COVID restrictions and widespread job losses have made the battle even harder. Diminich co-leads the Charlotte chapter of Ben’s Friends, a support organization for food and beverage professionals who struggle with substance abuse. On September 26, galvanized by a spike in relapse rates, he donated 100 percent of his sales—almost $4,000—to the nonprofit.

Fellowship and recovery depend on a close network of people who care about each other, and so does Diminich’s business. “I’ve never felt more like a commodity,” he says of that fateful email. “What I wanted to do was build a small business that’s community based, that’s here to support those who support us.”

The day before we talk in early September, Diminich spent two hours at Simpson’s Produce at the Kings Drive Farmers Market. When we get off the phone, he’ll finish walking his pit bull, Sandy, attend a daily virtual meeting of Ben’s Friends, then get to work on today’s main course, Korean BBQ chicken. He has some late harvest peaches, too. When we hang up, he’s still not sure how he’ll use them, but he’s confident he can wring something wonderful from uncertainty.

ALLISON BRADEN is a contributing editor to this magazine.