THE SPRAWLING SOUTH CHARLOTTE STUDIO belonging to Stephen Wilson carries a hum of embroidery machines, stitching the artist’s creations into existence. On a recent Wednesday, the artist invited us into his studio to find out more about his new, ongoing body of work under the Modularity banner. Below, learn about the new series, now on display in a New Gallery show in uptown.

1. Unlike many series, Modularity is actually a mix of several explorations and styles for the artist. Here, he uses standardized sizes in cases, so that the hundreds of new works he’s creating can be assembled into endless variations in a modular fashion. A set of four similarly colored works may differ entirely in approach, whether it’s a play on pop iconography or a meditation on texture, a figurative scene or an abstract study.

“It’s daunting to work in a series,” Wilson says. “I always felt boxed in, doing just one style at a  time. Between series, I would do these studies. So I started looking at all of these different studies on the wall, and I thought, If I play with the colors and textures here, this could become its own thing. It’s purposefully set up to be modular. It’s set up like a sampler, like in turn-of-the-century crafts, showing different techniques [in similar hues].”

Pieces can be purchased singularly or in sets, allowing those taking Wilson’s work home to make their own arrangements. 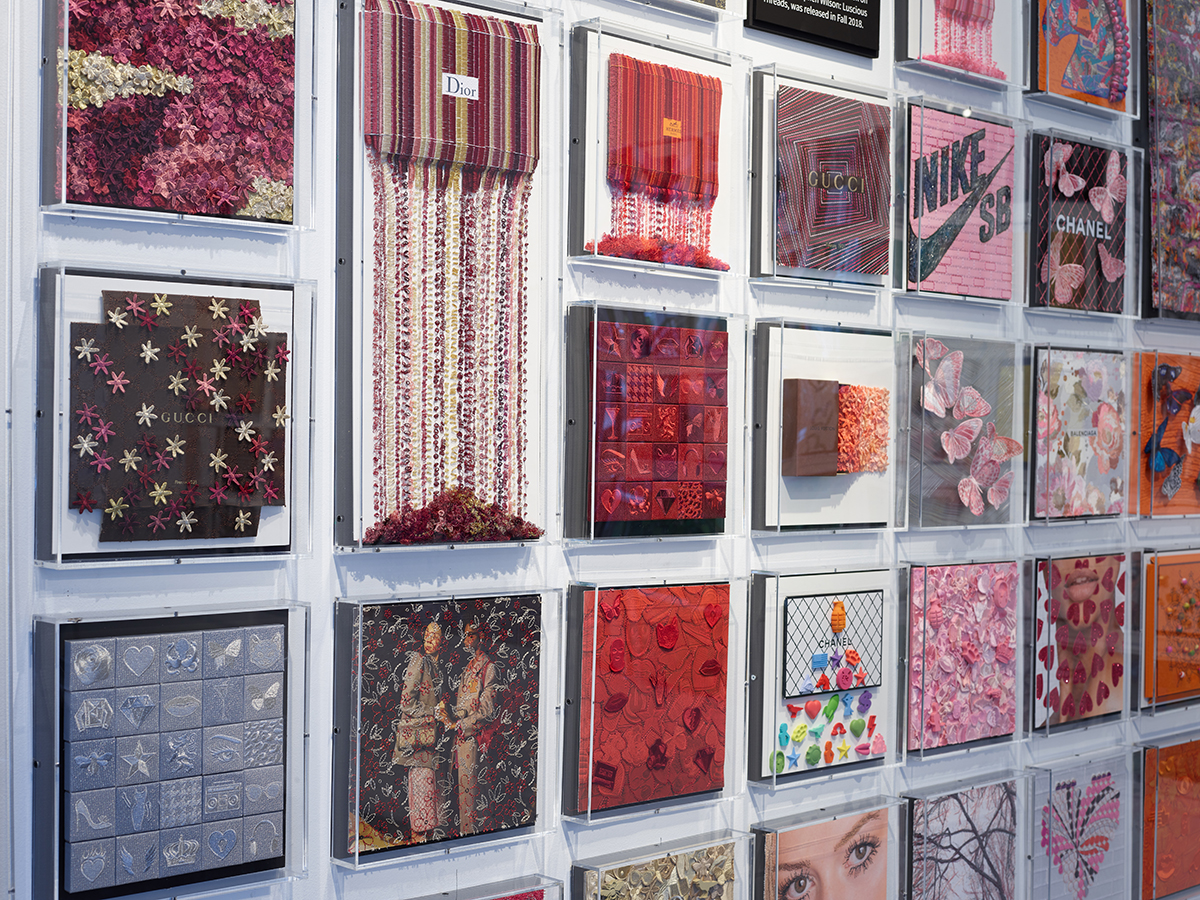 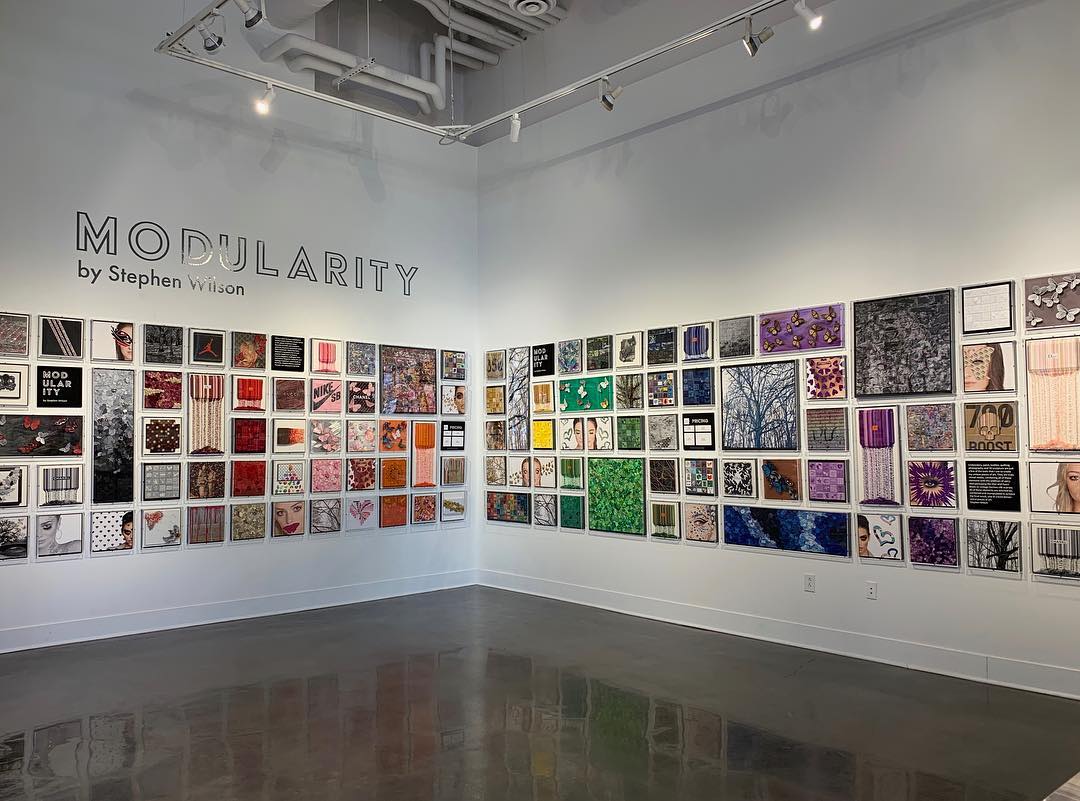 2. The process: The several techniques used in Modularity are part of an ongoing journey for Wilson. The New Jersey native began his career in the textile industry, eventually moving into fine art while employing those embroidery techniques. Today’s practice includes a blend of stitching, sculpture, painting, photography, and 3D printing. At the center of this output is a mastery of digital-based embroidery, the ability for the artist to design each stitch with intention, out of the millions needed for a series. Whether it’s creating his intricate, signature butterflies or lining the eye lashes of a figure, embroidery shines in unexpected ways in Wilson’s work. 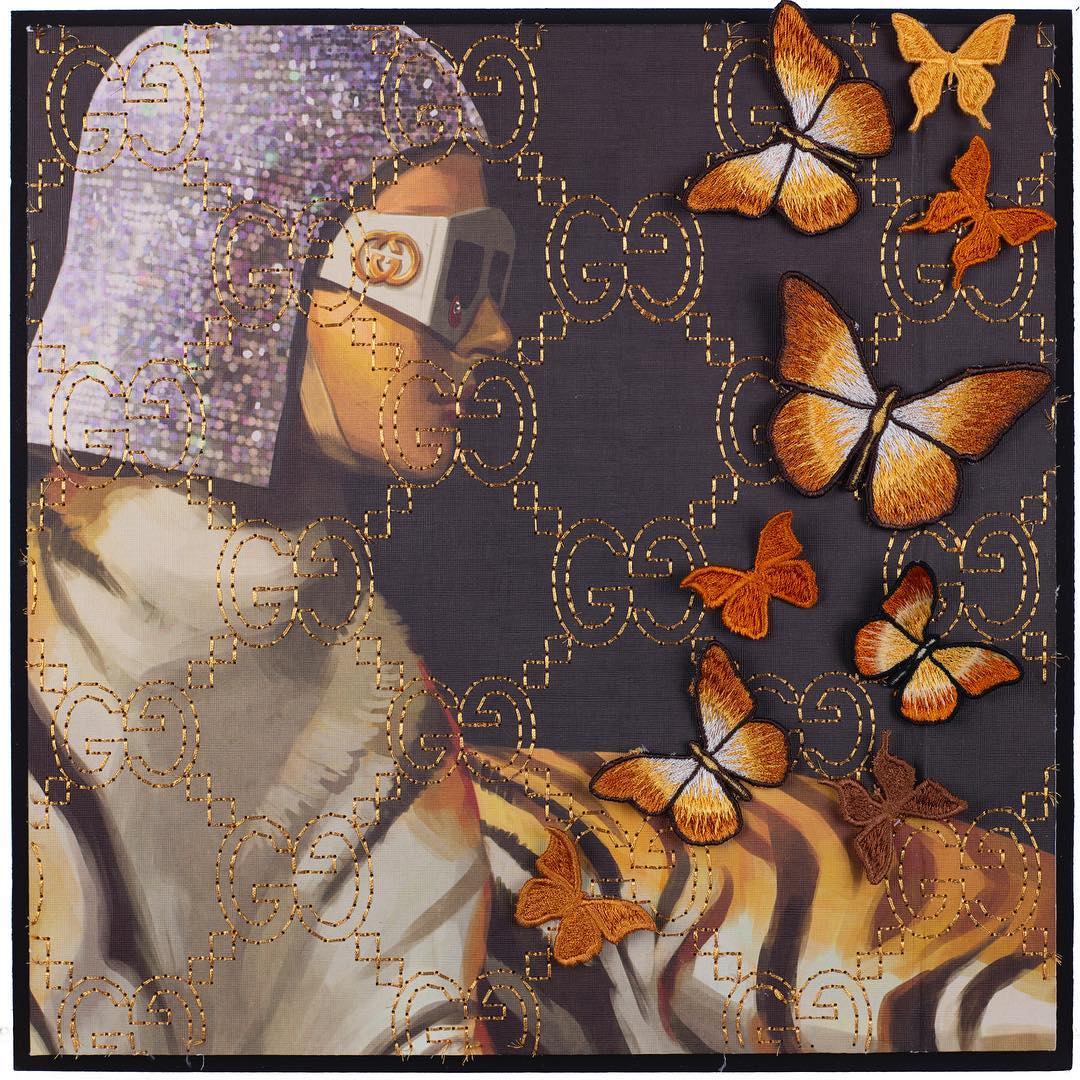 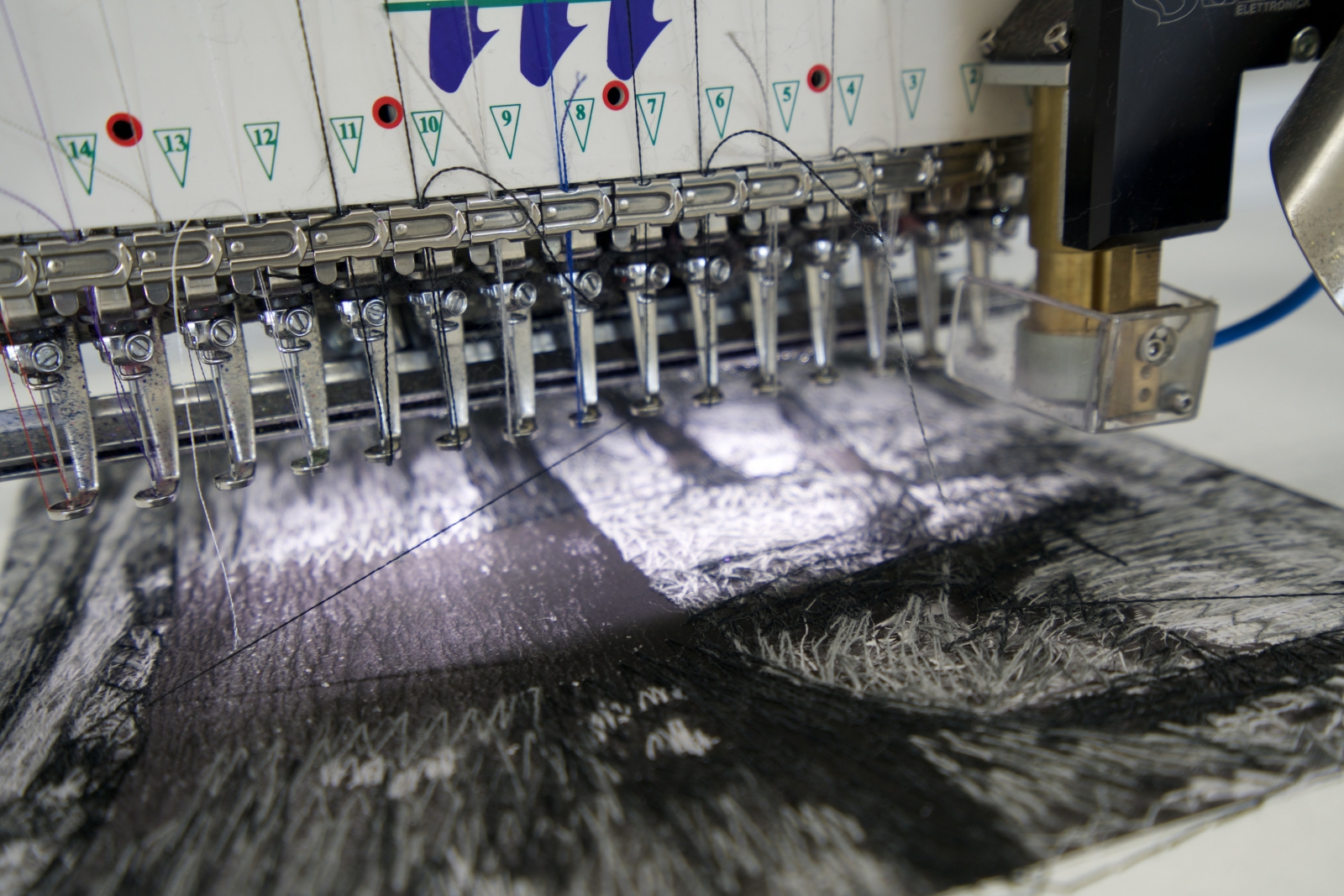 The way he's able to disassemble luxury fashion boxes, whether it’s Dior or Hermes, and other popular totems has led to brand collaborations. In recent years, he’s worked with sneaker boxes in new experiments. “People will buy a luxury box work alongside a play on a [more street-style] brand,” Wilson says. “I like that, because that’s what people do: They mix fashions, so why not do the same with art?”

He’s also created his own icons, which appear throughout his work and allow one series to allude to another, a constant conversation between approaches and eras of his practice. 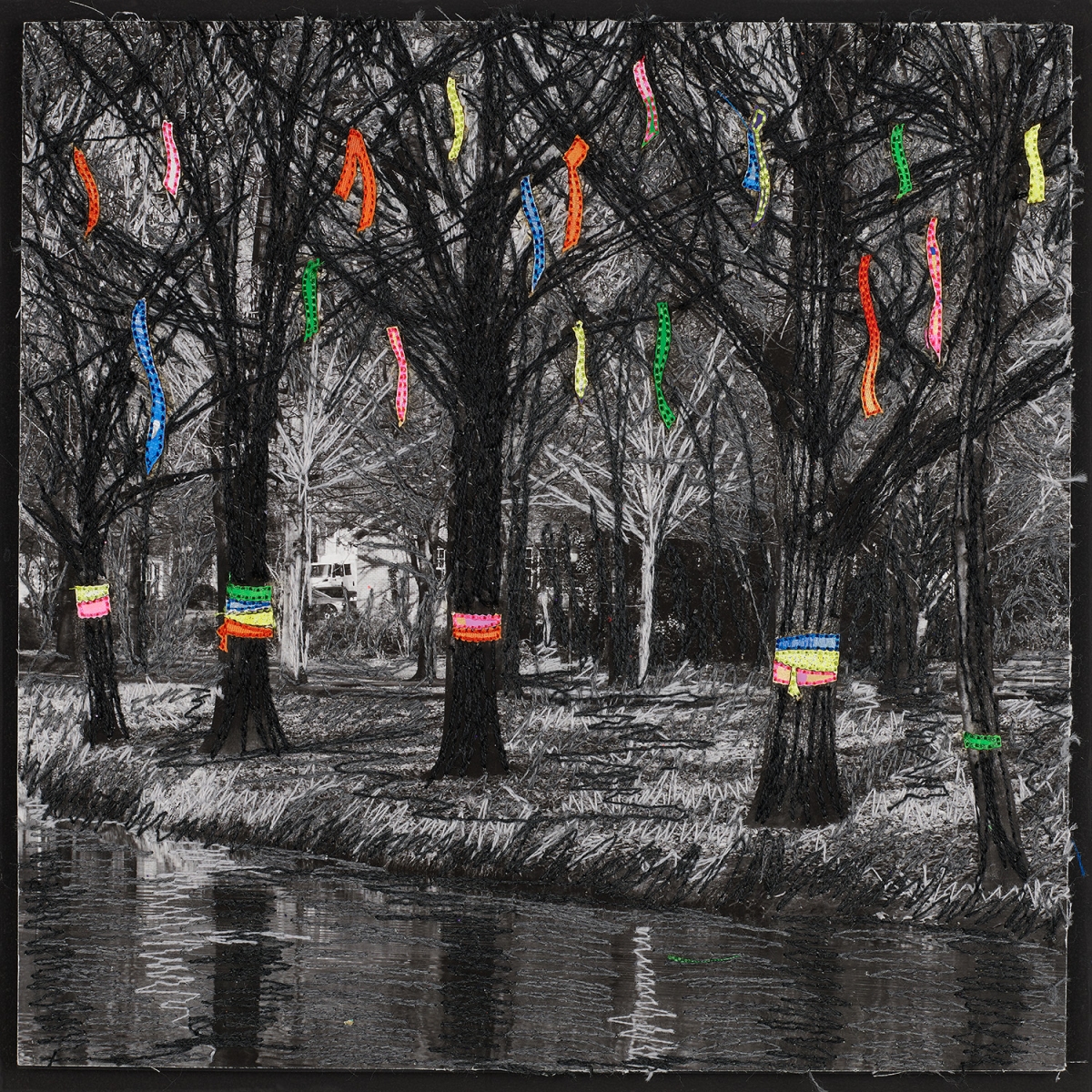 3. Here I Am, a series that accompanied Modularity upon its March 6 opening, has its own story. On a recent Saturday, a more raucous sound filled Wilson’s South Charlotte space, as local pre-teens and teens collaborated with the artist on a new series titled Here I Am. Wilson captured photos of uptown Charlotte, and then implemented the local kids’ own painted designs into new, embroidered works.

These youths are involved with nonprofit Children's Home Society of NC, which facilitates adoptions, helps maintain foster situations, and offers family education. Thirty of these works are integrated into the New Gallery show, and 100-percent of the proceeds from these pieces goes toward CHS. 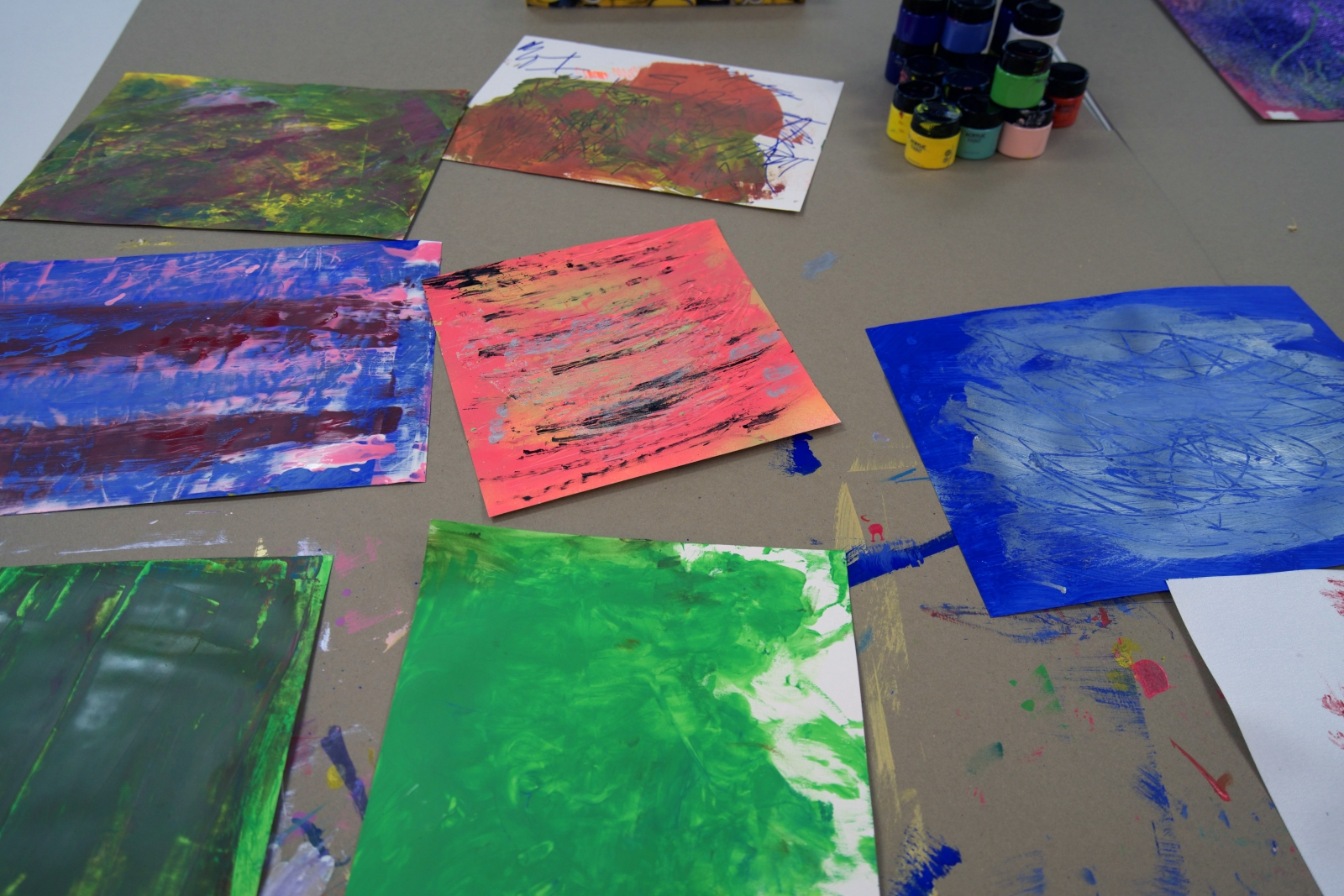 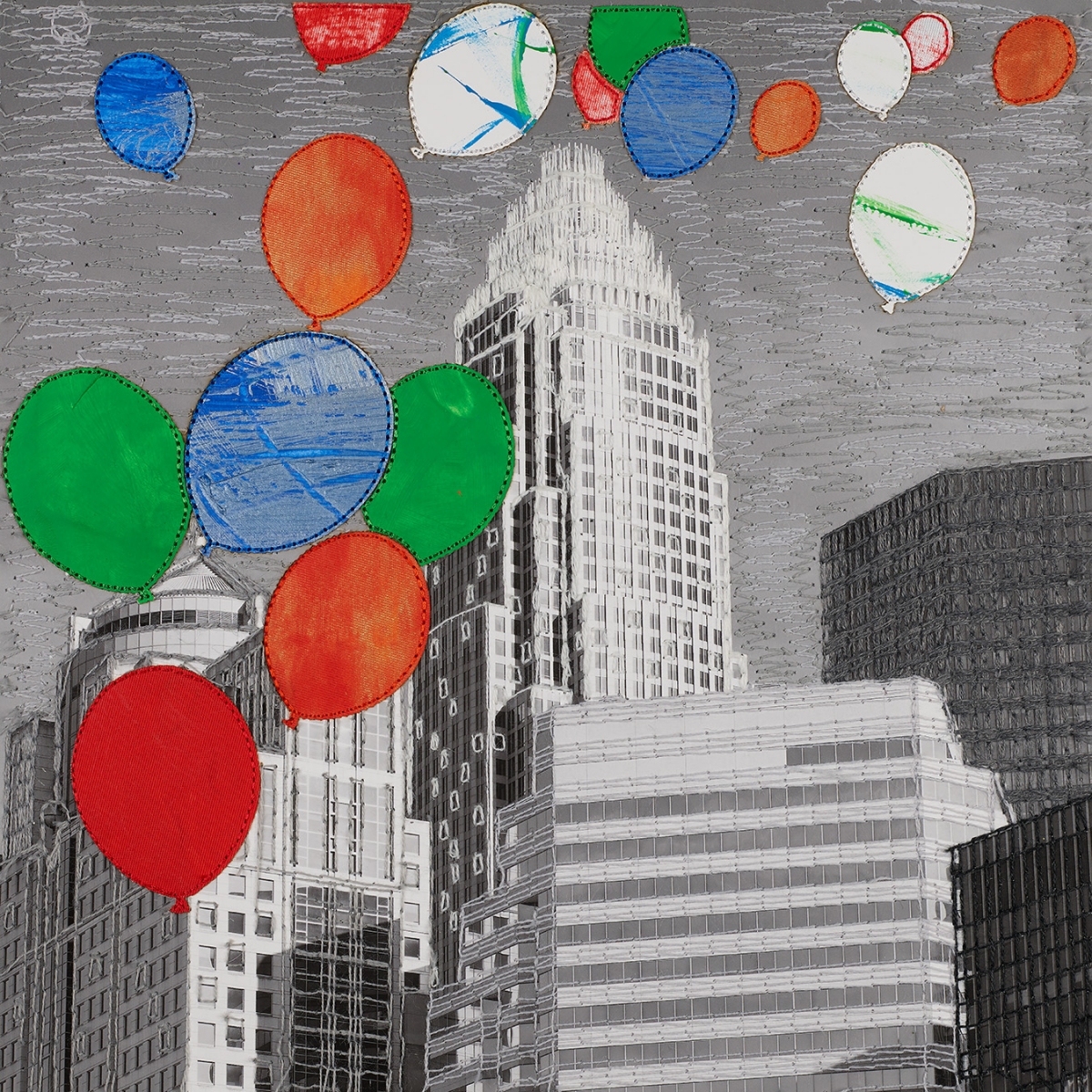 The work, in many ways, feels a kinship to Modularity. In fact, works in Here I Am were designed that way in size and as similar experimentations in texture, able to be assumed with the modular sets handpicked from Modularity. Wilson says the teens didn’t know how their paintings in his studio were going to be used. At a March 5, they saw just how their handiwork was integrated into images of their city. “I wanted them to be proud to be part of this show,” Wilson says. “Each is meant to stand on its own as a work of art.” 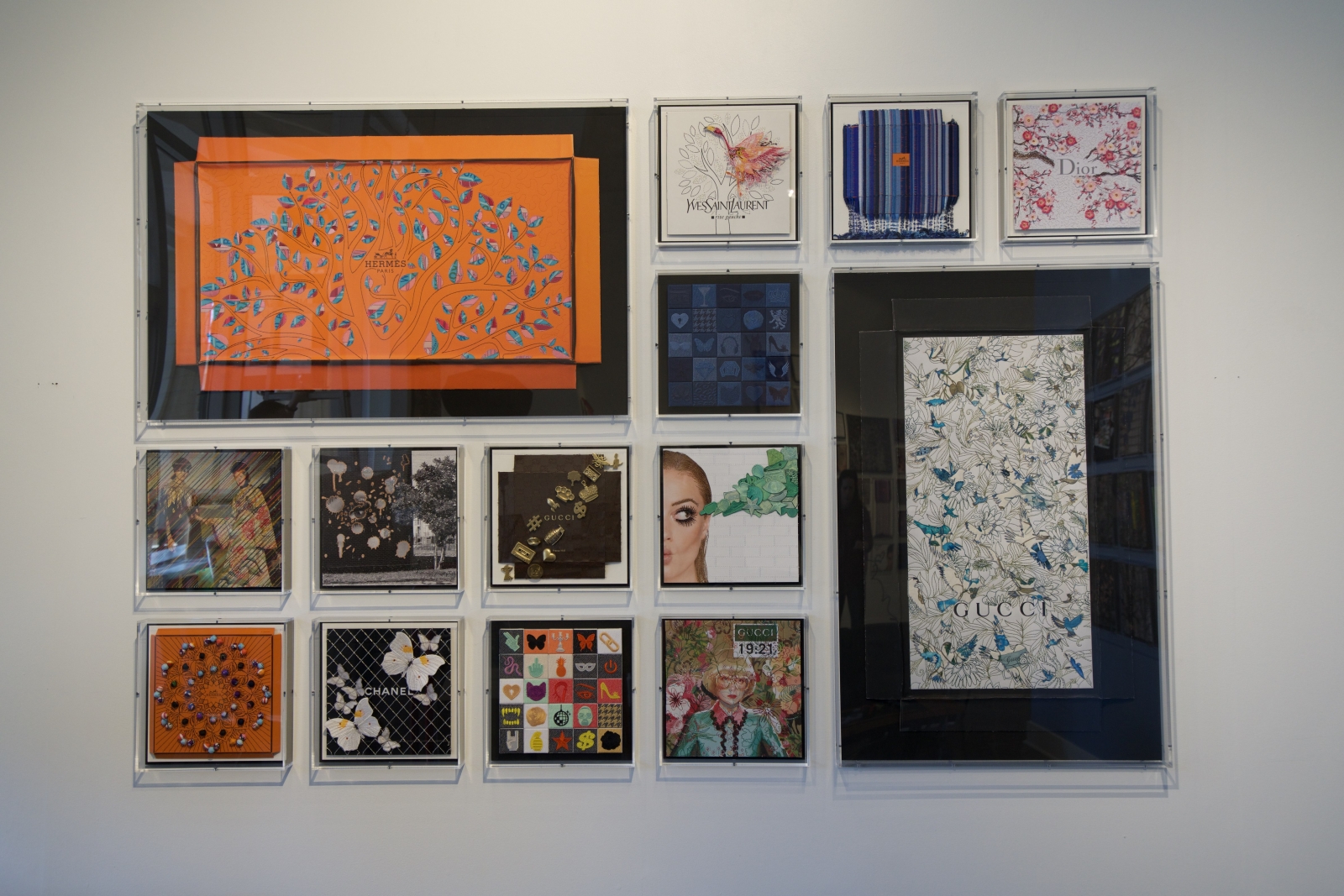 This article appears in the April 2019 issue of Charlotte magazine.
Categories: Arts + Culture
Contest of the Month