Want to get a feel for CIAA Week? We have a comprehensive list of the more than 150 parties at www.charlottemagazine.com/ciaa. Here are five events that will give anyone a taste of the CIAA experience. Plus the CIAA by the numbers

It’s become a CIAA tradition for locals and visitors alike to get up early on this Friday morning to be a part of a nationally syndicated radio show’s broadcast. Grammy Award-winning singer turned radio personality Yolanda Adams is a fan favorite, and you can expect surprise celebrity guests to appear. Friday, March 2. 5:30-10 a.m. Free. Charlotte Convention Center, 501 S. College St.

CIAA Women and Men’s Championships
After battling it out all week, the final two women’s and men’s basketball teams will compete for the tournament championship. The women’s game will be televised on Bounce TV and ESPN3, while the men’s game will be shown on ESPNU and ESPN3. Saturday, March 3. Women’s, 5 p.m.; men’s 8 p.m. $50-$275. Time Warner Cable Arena, 333 E. Trade St., ciaatournament.org/buy-tickets.

The CIAA Tournament, taking place February 27-March 4, is expected to draw tens of thousands of people to Charlotte and generate tens of millions of dollars. Let’s break it down: 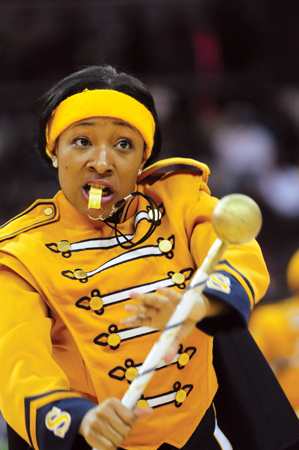 For our comprehensive coverage of 2012 CIAA Week, February 27 to March 4, including an events and parties list, stories, and photos, visit www.charlottemagazine.com/ciaa.

This article appears in the March 2012 issue of Charlotte magazine.
Categories: BOB Awards, Buzz > Update, News & Features, The Buzz
Contest of the Month