A DROPPED PHYSICS CLASS senior year of high school led Adele Yonchak to discover her love of art. When she realized she had enough science credits and was able to add an additional class to her schedule, she took a studio class from a teacher who had a contagious passion for art. Yet through college, where she studied art, Yonchak viewed painting as only a hobby, something she could never make into a career.

Now, years later, I sit in a quilted green armchair—the only seat in the room other than art stools—in Yonchak’s small studio off of her Charlotte carport. Surrounded by patches of sunlight, dozens of paintings, and blank canvases, Yonchak has traded in her marketing career for a full-time job as an artist and mother.

“I would paint stuff occasionally, like when I needed something for my house or as a gift, but I didn’t ever think it would be something I would do as a job,” she says. Her perspective changed nearly three years ago. “One day, somebody was looking for some art and I said, ‘You know, I could do that for you.’ And I put it out on social media and had a really good response. I wasn’t doing anything else at the time, besides raising my children, so I just started playing around with it and it just kind of took off.” 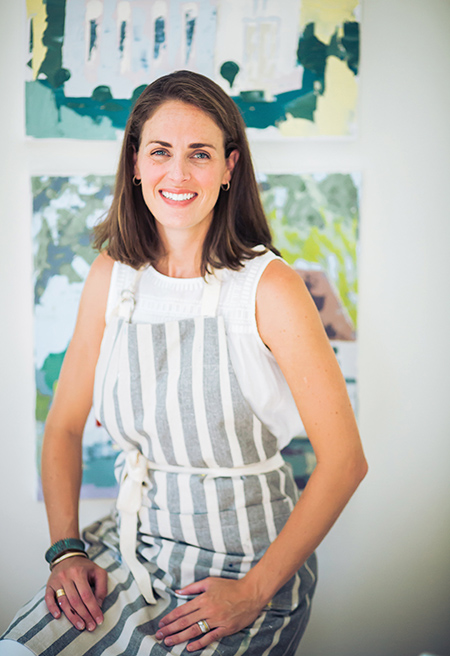 Yonchak describes her style as approachable and easy, focusing on landscapes with a lot of color, movement, and texture.

“I’ve always been attracted to landscapes, but in a nontraditional way,” she says. “I like to make it ambiguous. It’s familiar, but it’s not a specific scene. That resonates more with me and with other people, too, because it might remind me of my favorite vacation spot, but it also reminds somebody else of their favorite vacation spot.”

A palette knife is Yonchak’s primary painting tool, allowing for lots of layering and texture. Her background is in oil painting, but she recently converted to acrylics—paint that’s quick to dry is essential when three kids, all under the age of six, are around.

Locally, Anne Neilsen Fine Art Gallery displays Yonchak’s work, and she has representation in several other cities, such as Dallas, Knoxville, and Nashville, as well. She was also one of the first artists added to the recent launch of Well + Wonder, an online-based artist collective started by a friend.

“It’s kind of like an online art gallery,” Yonchak says. “She focuses on Southern artists and she represents a few in the major cities around the Southeast.”

People are more comfortable buying art online than in the past, which has helped her own platform grow, Yonchak says. She also attributes her success to the individuality of her work.

“In other industries, if you want to make a career out of it, you do what other people want you to do, in a sense,” she says. “With art, that doesn’t work.

This article appears in the December 2017 issue of Home + Garden.
Categories: Shopping
Contest of the Month