A Fascinating Story of Sister Homes in Historic Dilworth

Legend has it that side-by-side houses were built for sisters at the close of the Roaring Twenties. Although they look the same today from the street—and still share a connecting driveway—each house has been transformed for modern lifestyles.

ALICIA GAUL and LeeAnne Whitley have been next-door neighbors since the late 1990s, sharing a driveway that hints at the fascinating history of their Dilworth homes. Long ago, two sisters married two brothers and enjoyed the kind of close family relationships that once defined a smaller Charlotte—or so rumor has it. Porches and backyards edged by a single fence suggest the families spent summer afternoons together in a neighborhood first touted as a “suburban resort” in the newspaper in 1890. Although the modern owners have made significant changes to their properties, the driveway and historical details hold secrets from another time. 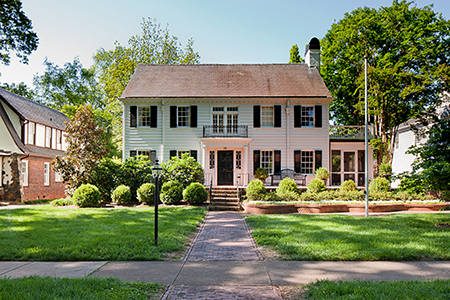 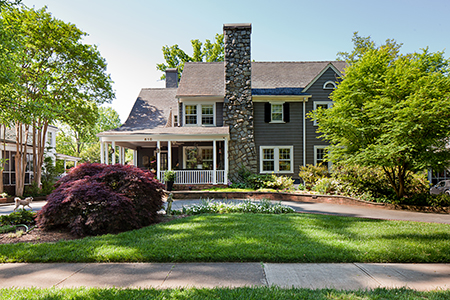 Top: LeeAnne Whitley’s Colonial home keeps a sense of its history from the front, but has changed significantly from another view. As the her family grew, so did the home: The Whitleys added more square footage on to the back of the house.
Bottom: Next door to Whitley’s house, Alicia Gaul has also updated her home in a way that keeps its original look.

“The house was built by the McGee family—of McGee Lumber—and the story that we were told was that Mr. McGee had two daughters that married two brothers,” says Alicia. “This house and the house next door were the wedding gifts for the two couples.” Under the house, beams stamped “McGee Lumber” confirm a connection to the lumber company. The houses were built late in the neighborhood’s development, as part of the northern extension close to Morehead Street. They don’t appear in the Charlotte city directory until 1931, four decades after Edward Dilworth Latta launched his streetcar destination south of the city, drawing investors with a boating lake, flower gardens, and woodland walkways.

Alicia is sitting at the island of her sunny, modern kitchen, one of the changes she and her husband have made to the house. The butler’s pantry is gone—the space incorporated into the kitchen—and next to the kitchen, a dining area with an office opens to a spacious deck.

From the street, both her house and the one next door look historic, but each has been modernized in the back, both inside and out. This kitchen is chock-full of color, restrained by sleek lines. The Gauls revamped it two years ago, ditching dark cabinets for white ones and adding creamy counters and gray floors to cool down new, Caribbean-blue walls. A backsplash of tile circles in Charley Harper hues—the illustrator’s mid-century style combined simple shapes with bold colors—puts a ribbon of energy at work-space level. 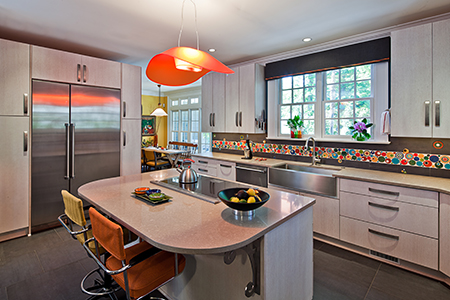 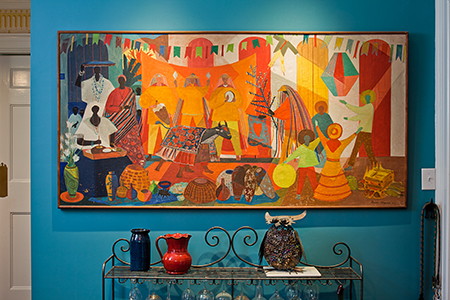 Above: A contemporary kitchen and bright colors throughout the home have helped make the 1930s structure a comfortable home for today.
Below: A painting by Grover Chapman, an artist born in Asheville.

A flea market painting anchors the room’s colorful vibe. Alicia bought it decades ago, intrigued by celebratory figures in stylized shapes and blocks of color. Later, a houseguest from Brazil explained the meaning. “It’s basically a collage of South American carnivals and religious festivals. I just love everything about it,” Alicia says. Grover Chapman, the painting’s Asheville-born artist, moved to Brazil and died in Rio de Janeiro in 2000; the painting is from 1961.

Alicia says the first owner of her house was a physician, and a search in the Carolina Room at the uptown library proves the story true: Leighton Hovis was a doctor married to Mary Louise McGee. The Gauls’ shingled house still has its cozy front porch with two front doors, one leading to a room that was probably an office. It wasn’t unusual for doctors to make house calls or to keep a home office in those days. Later directories list Hovis as an eye, ear, nose, and throat specialist with an office on North Tryon Street. 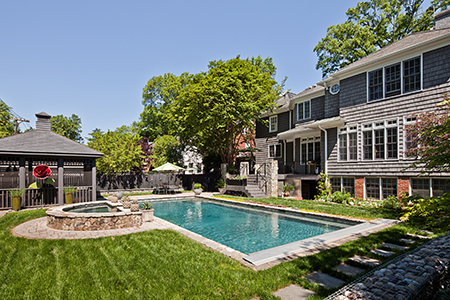 With an inground pool, the backyard of Gaul’s home isn’t something you’d see in the 1930s.

The medical connection is not lost on the Gauls. Alicia’s husband, John Gaul III, is an orthopedic surgeon whose grandfather, John Gaul, came to Charlotte in the 1920s as an orthopedic surgeon. His practice grew into what is today known as OrthoCarolina, a large orthopedic health care organization. Could the first John Gaul have known the doctor who once lived in this house? It’s quite possible, since they both practiced medicine in the same small city.

Outside, the backyard has undergone a change as big as the renovations inside. The semi-circular driveway and garage have disappeared; in their place are a rectangular pool with stone coping, a comfortable patio, and a screened gazebo big enough for a party. With two grown children, the Gauls built a great space for family gatherings.

Local lore says the two sisters who owned the houses on Berkeley Avenue had back porches facing one another so they could speak porch-to-porch. When the Whitleys purchased their home, this antique glider sofa and chairs came with it, and may have belonged to the original owner.

From here, it’s easy to see the biggest change to the house next door. Across the driveway at the back of the Whitleys’ home is a Southern-style porch with white columns and lush hanging ferns, a classic update to the Colonial architecture. The Whitleys bought the house in 1990, paying full price the day before it was to go on the market. “Houses in this neighborhood didn’t go on the market that often, and when they did, they were scooped up,” says LeeAnne. She and her husband Bill lived on nearby Lexington Avenue, patiently waiting for the right next house.

The 1931 Charlotte city directory lists Frank Hovis as the owner of this house, married to Alba McGee. True to the story Alicia was told, he was employed at a family funerary business; he’s also listed as coroner of Mecklenburg County. In later years, he got into banking; by 1951 he was also listed as vice president of Home Federal Savings and Loan. That same year, the funeral business included ambulance services. 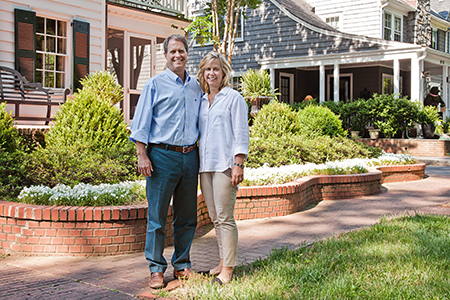 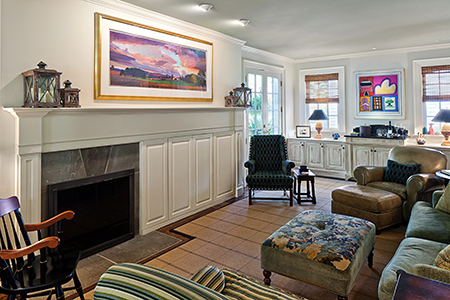 Above: LeeAnne Whitley and her husband, Bill, used to walk by their current home while living nearby. When they heard the house was going to sell, they put in an offer before it went on the market. Below: When the Whitleys expanded their home, architect Don Duffy provided a creative solution to the off-centered fireplace. The TV is now housed behind paneled doors.

When the Whitleys bought their white clapboard house, it had been fully renovated, down to the wiring and plumbing. It was perfect for the two of them, but in the late ’90s they had three children at home and needed a different configuration. The back of the house came off to expand the kitchen, add a family room, and build out the basement. Areas that were unnecessary—such as the basement’s coal chute and coal room—were eliminated, and modern upgrades were added. The dark basement got a spacious poolroom with natural light, thanks to a clever row of narrow windows designed by architect Don Duffy.

One of the biggest design challenges was the family room fireplace, which became off-center when the room became longer. Duffy resolved the imbalance by adding a TV beside the fireplace and tying it together with a long mantel. A window on one side and French doors on the other enhance the symmetry. The family room’s proportions contribute to the classical architecture of the house, while enhancing its livability.

And living comfortably is the main concern of both the Whitleys and the Gauls, as they’ve adapted historic spaces to suit modern needs. The man who created Dilworth had a reputation for innovative ideas, and no doubt would feel pleased to see his best idea—the Dilworth neighborhood—thriving in the twenty-first century. And as for the McGee sisters, if they were to pull in front of their houses today, they’d feel right at home. The only wood-sided houses on the street would look just as they left them.

The author thanks Tom Hanchett, staff historian of Levine Museum of the New South, and Dan Morrill, emeritus professor of history at UNCC, for their assistance.