A Guide to Successful Shuteye

Everyone does it but few do it enough: Sleep. A five-letter word that is too critical to not be made a daily priority. When it comes to the latest research on ZZZs, experts have tackled some interesting studies. Here are three theories put to the test this year. See if your intuition agrees with the findings 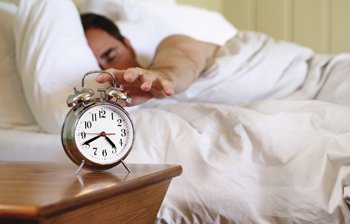 True. The Stanford Sleep Disorders Clinic and Research Laboratory found that swimmers who got extra sleep swam faster, reacted off the blocks more quickly, and increased kick strokes by five more kicks. And not getting enough sleep seems to have the opposite effect. Studies cited in Runner's World correlate long-time sleep deprivation to quicker exhaustion, deterioration in physical performance, higher lactate accumulation, increased heart rate, and a lower volume of oxygen used while exercising.

"What's known is that sleep deprivation makes you less active and affects your metabolism," says Will Caldwell, MD, a sleep apnea specialist at Mecklenburg Ear Nose & Throat. "There's a definite improvement in cognitive function like reflexes when you get enough sleep."
Athletes and nonathletes alike can establish proper sleeping as a part of a regular exercise regimen. What's standard? Seven to eight hours for adults and nine or more hours for teens and young adults.

False. Though many consider it a nightly ritual of relaxation, watching TV or surfing the Net before bed will only postpone shut-eye. In a study conducted by the University of Haifa and Jezreel Valley College in Israel, middle school children with TVs or computers in their room went to sleep half an hour later on average but still had to wake up at the same time.

"Adolescence is a period of growth, so teenagers have shifted circadian rhythms, which means they naturally go to bed later and wake up later," says Caldwell. "But if a society makes kids get up at 6 a.m. for high school, you are already treading on their natural sleep—you don't want them to go to bed late, too."

He adds that circadian rhythms are sensitive to a stimulus like light, which makes TVs and computers a problem. So if you're looking to unwind, listen to soft music or read a magazine. According to a 2006 study in the Journal of Advanced Nursing, participants who listened to a CD of relaxing classical music for forty-five minutes at bedtime took significantly less time to fall asleep than those who did not. Or if it's your favorite TV show that's keeping you up past bedtime, consider buying TiVo or watching it online the next day.

False. Women don't just need sleep for their "beauty"—according to a study by Duke University researchers appearing online in March 2008 in the journal Brain, Behavior and Immunity, it's for their health, too. The researchers found that poor sleep is not only associated with greater psychological distress and higher levels of biomarkers associated with elevated risk of heart disease and type-2 diabetes, but these associations are significantly stronger in women than in men.

"My concern with this study is what's not known: whether it's stress in itself causing elevations of C-reactive proteins or whether it's insomnia causing the elevations," says Caldwell.

Researchers measured the poor sleep by the total amount of sleep, the degree of awakening during the night, and, most importantly, how long it takes to get to sleep. They found that about 40 percent of the men and women were classified as being poor sleepers. Regardless of gender, the sidebar above can correct some behavioral decisions that may keep you from enough sleep.

This article appears in the December 2008 issue of Charlotte magazine.
Categories: Feature
Contest of the Month