A Home for the Holidays

After years of crowded, 30-guest Christmas Eve dinners, a south Charlotte family of seven brings in a team to expand their home 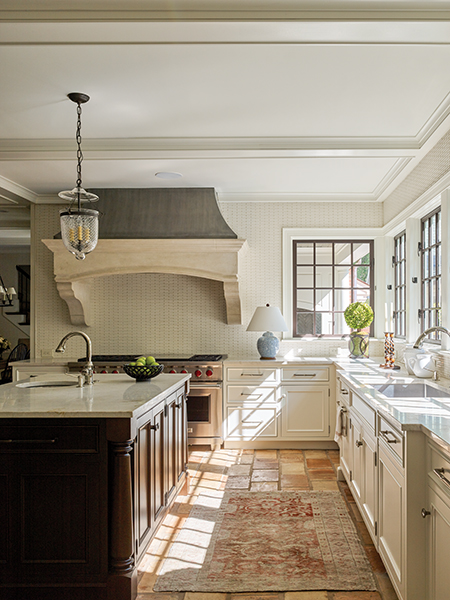 WHEN TANYA and Mike Clawson moved into their home near Quail Hollow a decade ago, they knew their family of seven would outgrow it. That feeling was stronger during the holidays, when 30 guests would linger in the kitchen on Christmas Eve.

“Even when we bought the house, we knew this kitchen wasn’t going to work long-term,” Tanya Clawson says. “But we loved the house, and so we bought it and figured we’d deal with it later.”

Later came, and Tanya and Mike turned to local architect Don Duffy to improve the flow of the home, make the kitchen larger, and add a room for their three sons and two daughters to spend time in. Duffy came up with a plan to enlarge the kitchen and expand the living space into what was previously the garage—nearly a year-long project. Turning the garage into a family room was one of the most difficult pieces of the process. In order to make the room look natural, significant structural changes had to be made.

“This is [a] witness protection program—we’re going to do a lot of bruising and breaking of this body to bring it back with different form, and when it’s done, it will have a different form and great look,” Duffy says of the changes. “But we’ve got to break some bones.”

Duffy recommended the Clawsons bring in Caren Bistany to help lay out and design the kitchen, as well as a newly added laundry room, mudroom, and powder room that lead to the pool. Bistany, of Bistany Design, specializes in kitchens, interior architecture, and custom cabinetry. 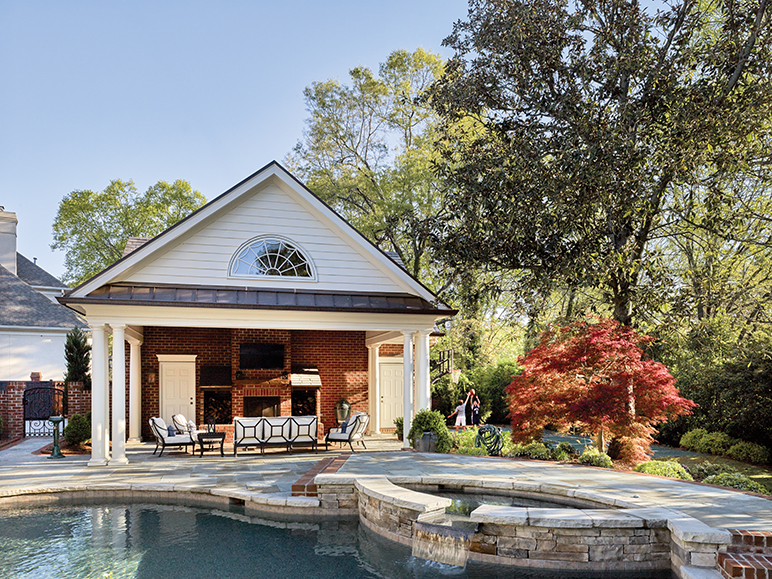 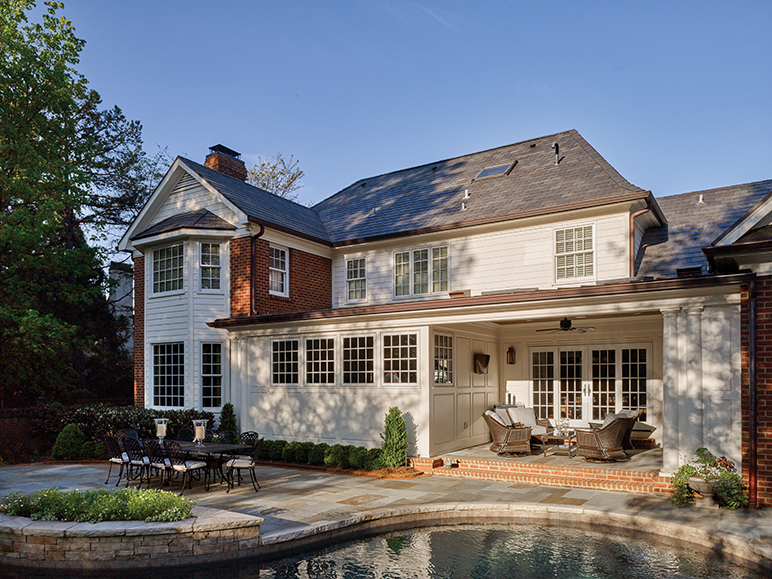 The Clawsons’ former garage became a family room, so a new garage had to be built. Architect Don Duffy designed an outdoor space with a fireplace and TV off of the new garage, working around the existing pool.

Bistany isn’t afraid to bring suggestions to Duffy on the architecture of the rooms, either. Duffy likes that about her.

One of those suggestions was to eliminate some upper cabinets to create a wall of windows in the kitchen, which reveals a panoramic view of the backyard and pool. Another was to create two islands—one with a sink and prep area, the other surrounded by barstools—instead of one large one, easing the flow of the room and creating more areas for guests to linger. The countertops are covered in quartzite, a durable material that can stand up to a family of seven but still looks like marble, which Tanya hoped for initially. The counter next to the refrigerator is topped with pewter, mirroring the materials used on the hood (the kitchen has a six-burner range) as well as a small bar. 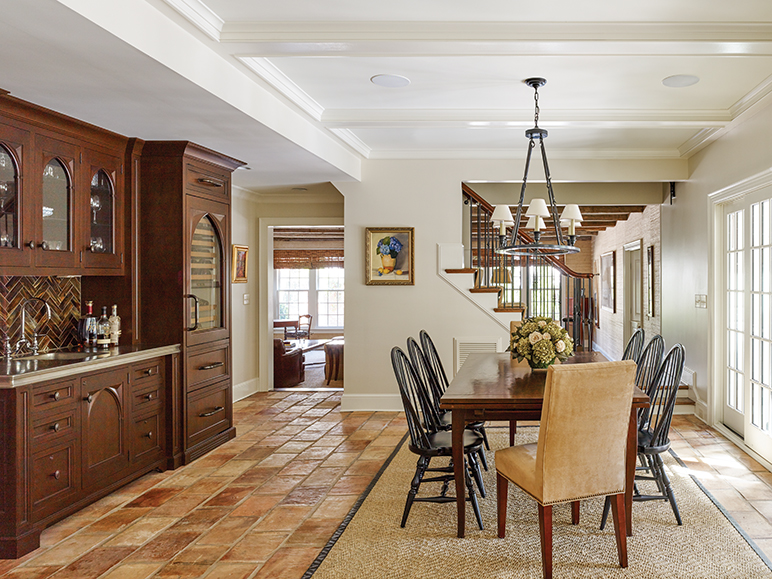 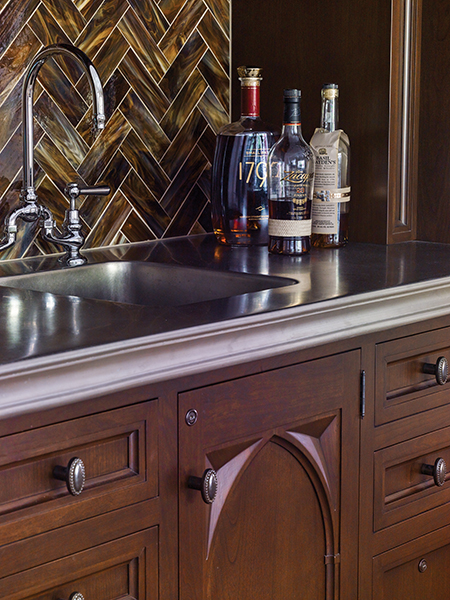 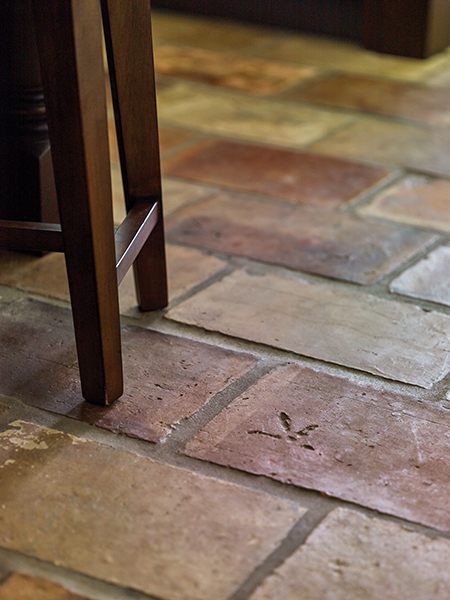 Middle: Gothic-inspired doors and cabinetry make the bar a statement piece in the kitchen. The addition of pewter countertops and a glass tile backsplash in a herringbone pattern make it stand out even more. Bottom: The occasional animal footprint can be found in the antique floor tiles, repurposed from French rooftops.

“The pewter countertops, you have to know going into it, it’s going to scratch,” Bistany says. “But it’s also going to patina and fade beautifully.”

To make the kitchen complement the connected family room, Bistany recommended the Clawsons also bring on an interior designer, and Tanya mentioned Anita Holland. Holland happened to have an office in the same building as Bistany, and the two often worked together. With Bistany’s endorsement, Holland joined the renovation team. Her contribution quickly expanded from just the new space.

Tanya, Bistany, and Holland were at Francois & Company and came across antique tiles taken from French rooftops. The warm tiles had the durability of brick but a homier feel—and became the centerpiece of the home’s design. It all led to a larger project than Tanya had anticipated.

AS A STARTING PLACE for the furnishings, Holland and Clawson worked together to pick a rug for each room, and Holland took inspiration from that first purchase.

“We started with the rugs, because a lot of projects, if you can start from the floor up, it builds a nice background for the rest of it,” Holland says.
In the sitting room off the kitchen, a palette of blue complements a painting of a sailboat on the ocean. A mantle by Francois & Company matches the hood in the kitchen, and a sofa and chairs create a quiet sitting area that welcomes guests away from the main rooms. Bistany suggested adding a second opening to the room to help with movement to and from the kitchen.

The dining room, which is accessible from both the front foyer and the kitchen, has a honey tone, complementing the antique floors, while across the hallway is another sitting room, this one decorated in yellows.

Aside from the kitchen, the garage-turned-family room gets the most use. Duffy’s design created dual entrances to the room from the main living space, as well as one from the back entryway, creating a more natural flow between rooms. You’ll often find the kids in this room, which has a durable design with a sofa, leather swivel chairs, a billiard table that’s often converted to a ping pong table, and TV. Antique beams cross the ceilings, each board carefully examined by Holland and Bistany to determine which side should face down. Though this room has the most laid-back design in the home, this is Holland’s favorite—she enjoys seeing how much use the family gets out of it, and how well it fits them. 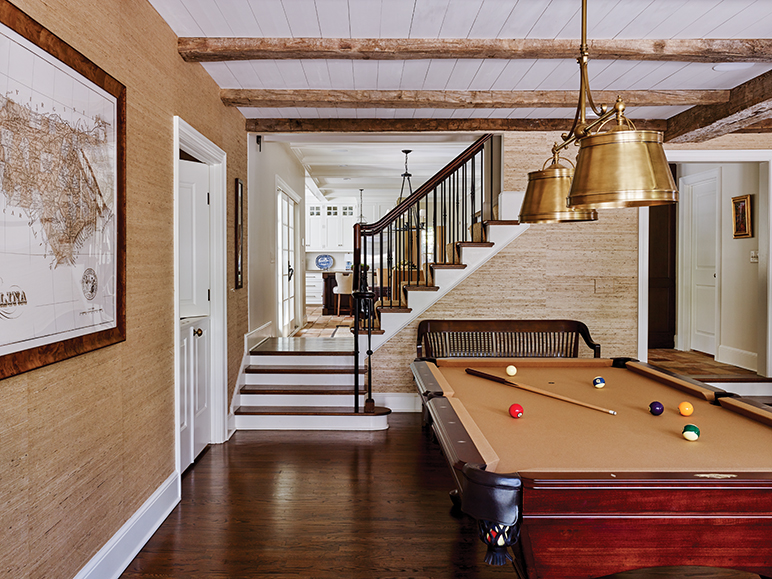 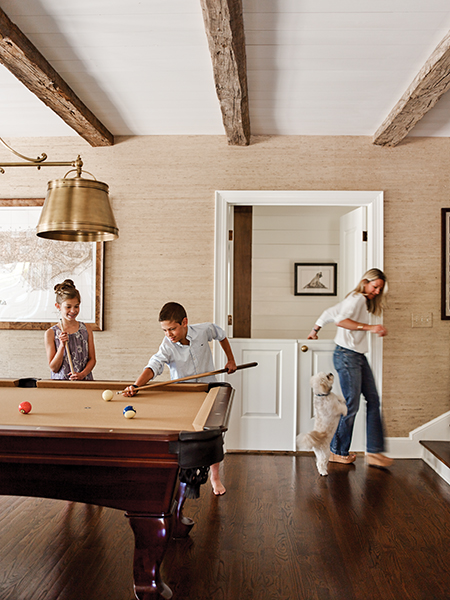 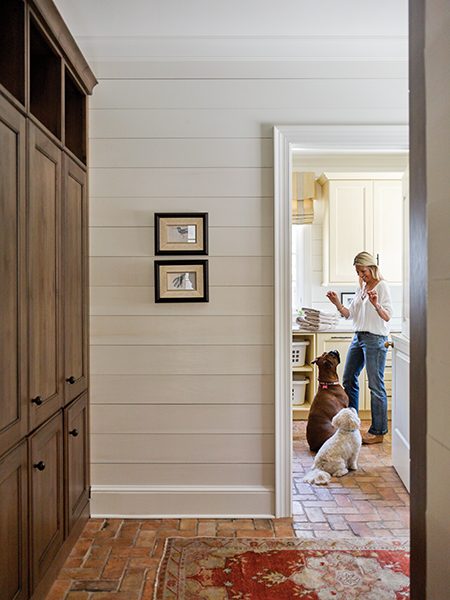 With five children and two dogs, Tanya Clawson spends much of her time in the laundry room.

“It’s not my house—once I leave here, doing my part, it’s all theirs, as it should be,” she says.

The renovations took 11 months—the start was delayed because of rain—and the Clawsons had to rent a home nearby while the work occurred. But when it was done, they knew they’d made the right decision.

“We came to grips with the fact that the renovation would require us to move out and was going to be a much bigger deal than we thought,” Tanya recalls. “We just kept looking at houses—anything with five or six bedrooms. But we realized we were going to have to make minor changes to anything, you know? And we really did like this neighborhood and area. We loved our plans more than anything.”

Since moving back into their updated home, the Clawsons have enough space for everybody, including their extended family, during those big holiday gatherings. It’s the home they’ve always wanted to entertain in, made possible by a group of people who know their strengths.

“We really take a team approach,” Bistany says. “[Duffy’s] the architect; he brings in key people to work on the project, and we all work together as a team. And we’re all doing what we do best.”

This article appears in the July 2016 issue of Home + Garden.
Categories: Feature
Contest of the Month