INGRID STEELE WISHES she had a level lot, more sun exposure, and a location with less traffic noise. Rather than obsess over the challenges of her SouthPark yard, Steele dug in to turn the almost one-acre space into a lush urban landscape that embraces the flaws.

“You make the best of it,” she says. “It wouldn’t be as interesting if it was just a flat lot with landscaping.”

Steele and her husband, Walter, bought the brick home on a cul-de-sac in 1999. The neighborhood was part of a former equestrian estate that was subdivided and developed; the Steeles’ house sits on top of a hill, and the surrounding lot slopes downward.

Despite the odd topography, the couple fell in love with the house and its proximity to neighborhood amenities. Steele, who spent years gardening in various rentals, was eager to put down roots—but first she had to dig up some of the unwanted remains from the old horse pasture.

After she cleared out a thicket of bamboo, ripped up ivy, and removed an old barbed wire livestock fence, Steele was left with a slope and no idea what to do with it.

So when she spotted a neighbor’s landscaper, she asked for free advice. He generously sketched out ideas on a piece of paper, and that informal plan became the basis of the design—but Steele is the first to admit she followed the spirit of the suggestions rather than focusing on design absolutes. 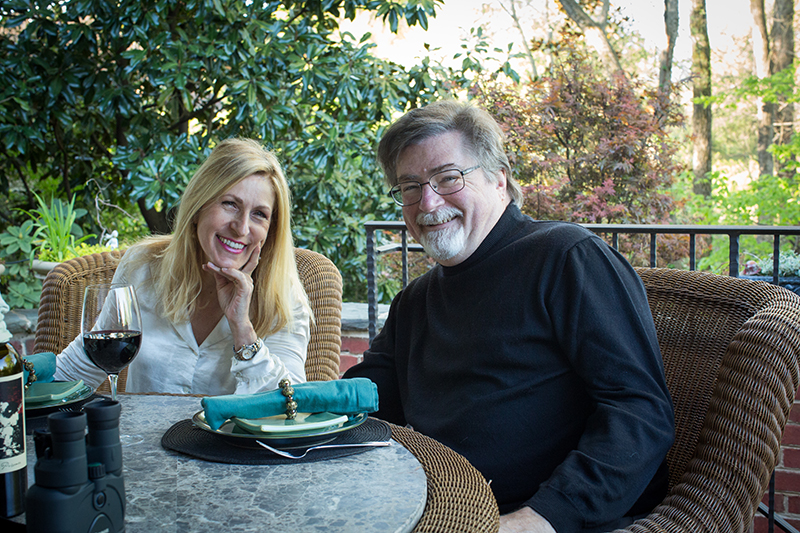 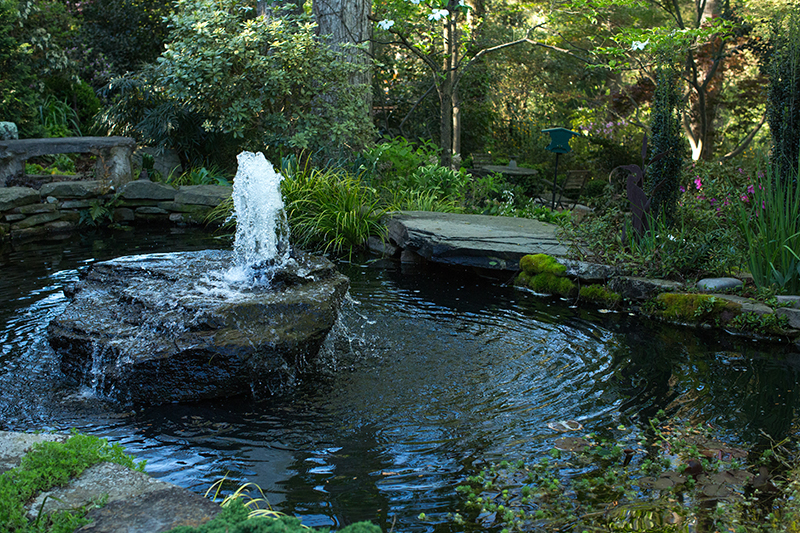 Ingrid and Walter Steele relax on their patio, which overlooks a fountain and pond (right).

“There was no real plan, and I didn’t follow any rules,” she explains.

Steele constructed gravel paths that wind through the landscape; their rock borders contain wide garden beds filled with Confederate jasmine, irises, strawberry geraniums, “soft caress” mahonia, camellias, and roses in a cacophony of colors, from green and white to purple, yellow, and tangerine.

One of the paths leads to a secluded seating area with a well-loved hammock, concrete benches, and a weathered wooden table and chairs. Massive trees shade the area, making it feel a million miles away from the city. Other paths are made for wandering and appreciating the plants in the adjacent beds.

“It’s spontaneous; I just pick things I love and look for places to put them,” she says. “When I go somewhere and see plants, I can’t resist leaving with something.”

Steele found two fragrant osmanthus for $5 each at a big box store and used them as a privacy screen; a crape myrtle adjacent to the driveway was $1 at an estate sale; purple phlox was transplanted from her mother’s garden; and Solomon’s seal came from a library plant exchange.

Garden art—including birdbaths and birdhouses, plaques, statues, sculptures, and chimes—is placed throughout the landscape. While some pieces, including the trellis marking the entrance to one of the garden paths and a metal sculpture next to the pond, are focal points, others peek up through the foliage, like secret garden surprises.

The garden might have come together haphazardly, but it looks beautifully curated, thanks to Steele’s knack for mixing colors and textures.

In 2010, the Steeles renovated their home, adding a garage, sunroom, and upper and lower terraces that overlook the backyard.

In the new sunroom, Steele says, “There is a huge bay window where I can sit and look out on the garden when the weather is bad.”

The renovation included the construction of a small koi pond with a bubbling water feature that drowns out the traffic noise. The neighborhood children love coming over to feed the fish; Steele leaves out containers of food for visitors to toss into the pond.

The pond is also a favorite spot for Stella, the tan and white mixed-breed dog the family adopted from the Humane Society of Charlotte nearly five years ago.

Stella balances on the narrow rock border surrounding the pond to peer into the water and watch the goldfish, sniffing the areas where a heron—a regular visitor to the pond—perched earlier. When the dog tires of exploring, she lounges on the lower terrace, while Steele sips a latte and looks out over the garden.

“Before we added the terraces, it felt like the house was up here and the garden was down there,” Steele explains. “The terraces help connect the house to the garden. Sitting up here feels like you’re looking out over the garden from a treehouse.”

Although the landscape is complete, Steele always finds something new to admire. In fact, her favorite spot in the garden changes from hour to hour.

“I love to watch the sun come through and see the rays dance and illuminate things throughout the day,” she says. “My favorite spot is wherever the light is good at that moment.” 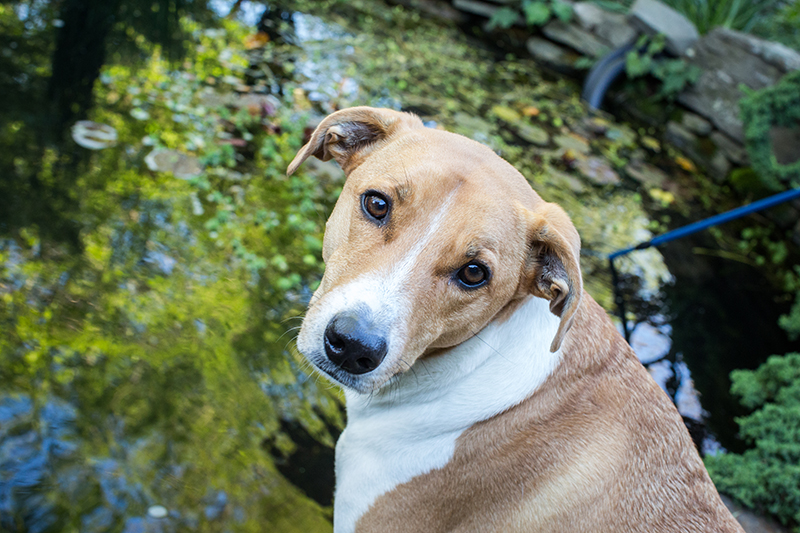 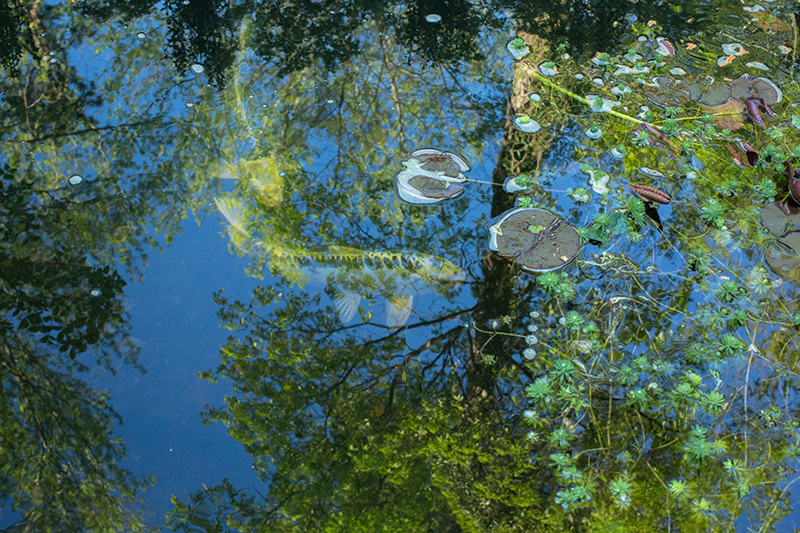 Stella (left) enjoys watching the fish in the pond.

This article appears in the June 2017 issue of Home + Garden.
Categories: Outdoor Living
Contest of the Month