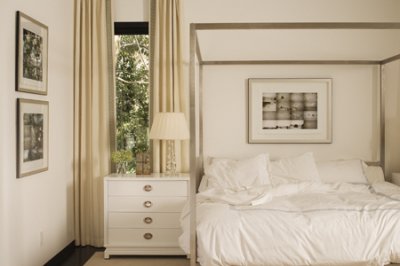 A chic stainless steel canopy bed from Room and Board is flanked by bedside tables, once belonging to Thomas’s great aunt, painted in glossy white. Thomas picked up the artwork by artist Kiki Smith while working at PaceWildenstein Gallery in New York City.

Purchasing a midcentury modern ranch in Myers Park, a neighborhood notable for its stately traditional homes, seemed only natural to Katharine Hidell Thomas, co-owner of the Hidell Brooks Gallery in South End. After all, the thirty-seven-year-old Charlottean grew up in a modern house on Museum Drive, and her grandparents (whom Thomas calls "avant-garde") built a very contemporary single-story home in the small town of Grover, North Carolina. "The town had never seen anything like it," laughs Thomas. "Their house had great floor-to-ceiling windows. I loved that you could stand in the kitchen and see the view outside the front and back."

In keeping with family tradition, Thomas, who was single at the time, found her own fifties-era dwelling in 1999. The 2,100-square-foot, three-bedroom, two-and-a-half-bath, red-brick ranch was built in 1951 by A. J. Odell Jr., a contemporary of Frank Lloyd Wright. Its relatively large windows and open floor plan — and just the fact that it was an early ranch—definitely made the house modern for the time, says Thomas.

After living there for two years, Thomas updated the kitchen with sleek black cabinetry and white Carrara marble countertops. This study in black and white reverberated on a much wider scale after a heftier ten-month renovation in 2007.

"I was looking for more light and space, but didn’t want a huge home," says Thomas, married to Billy Thomas, and mother to Peggy, two. "I always imagined living in a U-shaped house with a patio in the middle." While she wanted her rectangular residence to grow wings, she had little interest in a whole teardown. For example, the statuesque, six-foot-tall owner insisted on retaining the low ceilings. "Friends thought I was crazy, but the ceilings didn’t bother me and they were characteristic of a modern fifties house," says Thomas. She was also firm on keeping the beautiful walnut parquet flooring with octagon-shaped tiles in the small dining room. Once again, she faced skepticism. Critics questioned whether the parquet flooring would mesh with the ebonized oak that would be laid in the rest of the house. "It just worked," says Thomas.

At the creative hands of architect Matt Benson, a partner at local firm Meyer Greeson Paullin Benson and builder L. W. White Construction, the home’s interior swelled to 3,407 square feet. Wide hallways were established, providing a breathy flow, and the creation of a comfortable screened-in porch and a large granite patio between the two wings enhanced outdoor living. "Windows were added to make the house feel larger and allow for views that would establish a connection to the outside," says Benson. In areas where privacy was necessary, wooden louvers crowned the glass panels. For Thomas, the resulting semipanoramic views were reminiscent of those in her grandparents’ home.

The façade of the house, along with much of the interior design, strongly echoes the marriage of black and white revealed in her revamped kitchen. Benjamin Moore "Super White" coats almost every wall, while black-painted molding frames each window. "Black and white makes me feel at home," says Thomas. "I enjoy sameness. My home looks like the gallery where I work, and that comforts me — like how my artwork comforts me."

An art collector since college, Thomas displays an eclectic mix of works at home. Though she points out that most of the artists she’s chosen to display include a lot of light in their paintings. Surprisingly, Thomas has only purchased one new piece of art since the renovation.

Thomas enlisted her childhood neighbor, Holly Hollingsworth Phillips, interior designer and co-owner of the English Room, to help define the look inside. The final product includes furniture ranging from midcentury family pieces to modern purchases found at mainstream retailers. At times, Phillips had to talk Thomas away from bright-white furnishings. Pointing to a tan rug and cream sofa in the family room, Thomas, pregnant with her second child at press time, reveals that she probably would’ve chosen white if it weren’t for Phillips, who steered her to warmer tones for a cozier feel and to help hide little fingerprints. As Thomas speaks, two-year-old Peggy coincidentally bounces into the room with a sticky sucker in hand.

No doubt that Peggy — who has playful abstract art lining the walls of her bedroom — and her newborn sibling will eventually gain a deep appreciation for the design that surrounds them. Peggy already marvels at the space-age Jonathan Adler chandelier in the dining area when it’s aglow at night. The "modern gene" is clearly dominant in this family tree.

Formerly an editor at Marie Claire, Nancy Rones writes for Redbook, Parents, and Self.