A Night of Special Effects 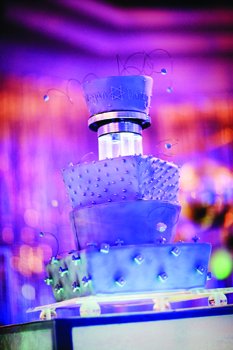 A high-tech cake of gravity-defying construction by Cake Expressions by Lisa emitted clouds of gas while slowly revolving on a turntable.

Logan and Danny looked at the shimmering curtain of silver tinsel, wondering what would happen once they walked through. They were thirteen years old, cousins born six weeks apart; on the other side, a big party was about to begin in celebration of Logan’s bat mitzvah and Danny’s bar mitzvah. Earlier in the day, each had stood to read the Torah in their respective synagogues, stepping into the role of an adult member of the community. Tonight they would celebrate with hundreds of family members and friends.

It was now or never. Stepping through the curtain, they looked in amazement at the ballroom of Ballantyne Resort. The dark room glowed—Logan first saw a dance floor lit from underneath and a theater screen showing familiar pictures. Although the kids knew the party would have a magical theme, they were unprepared for this. They had crossed into another world. “It was so cool!” Logan recalls. “I didn’t think it would be anything like that.”

“I was shocked,” Danny says. “I knew the theme was going to be holographic, but I didn’t know it was going to be all over the room.” Friends were spellbound; later, many would say it had been the best party of the year—something straight off the production reel from MTV’s My Super Sweet 16 extravaganzas that have defined the over-the-top birthday party trend of late.

Sikky Rogers and Angela Gala of event-planning company Rogers & Gala Creative Partners Inc. enlisted the help of Elements, Wink Lighting, and Classic Party Rentals to create a room completely lit with black lights so that it glowed neon green, blue, and yellow. Nebula balls held glass-encased lightning storms; on one table, clouds of mist poured from a large bowl. The walls sparkled and moved because they were lined with silver tinsel. Eerie white branches hung from the ceiling, covered in twinkling lights. Disco balls turned, scattering broken light from thousands of mirrored surfaces.

Creating “the wonder of illusion”—the party’s theme—was initially the idea of Rogers, who had recently read a novel in which one of the characters used illusions to escape the police. “I was fascinated with the process of what he did,” Rogers recalls. This sparked the idea of a party that would transport guests to a magical other-world.

Gala was a high school friend of Debbie Vitale. When Vitale and her husband, Rory, along with her brother and his wife, Lane and Elly Ostrow, wanted to give their children a night to remember, they looked for someone who would understand the significance of the occasion. Vitale knew that Gala understood this kind of accomplishment and trusted her judgment. “The kids are so happy they’ve completed the step,” Gala says.

The invitation set the stage: a hologram that showed Logan’s face or Danny’s, depending on how it was held, and invited guests to enter a world alive with magic. “Everything was very artificial—and purposefully that way,” explains Rogers. A high-tech cake of gravity-defying construction emitted clouds of gas, revolving slowly on a turntable; Rogers slips into laughter when describing the not-too-scientific process of scooping out the top layer to get the dry ice bowl to fit. The scene overwhelmed even the parents, who knew the details in advance. “I walked in and was blown away,” recalls Debbie.

It was an unforgettable experience as two seventh-graders parted with childhood. Stepping into the future, and assuming new roles in their communities.

This article appears in the October 2007 issue of Charlotte magazine.
Categories: Feature, The Buzz