A Quick Trip to the Middle East at Yafo Kitchen

I’M IN LINE AND I’M HUNGRY.

It’s just past noon on a Thursday in August, and I’m standing behind maybe a dozen people at Yafo Kitchen in SouthPark. I breathe the smells of Mediterranean spices—cumin, cinnamon, and turmeric. Rotisserie spits packed with golden chickens and caramelized lamb taunt me from the kitchen. A chef works supple dough balls into thin pieces of flatbread, called laffah. 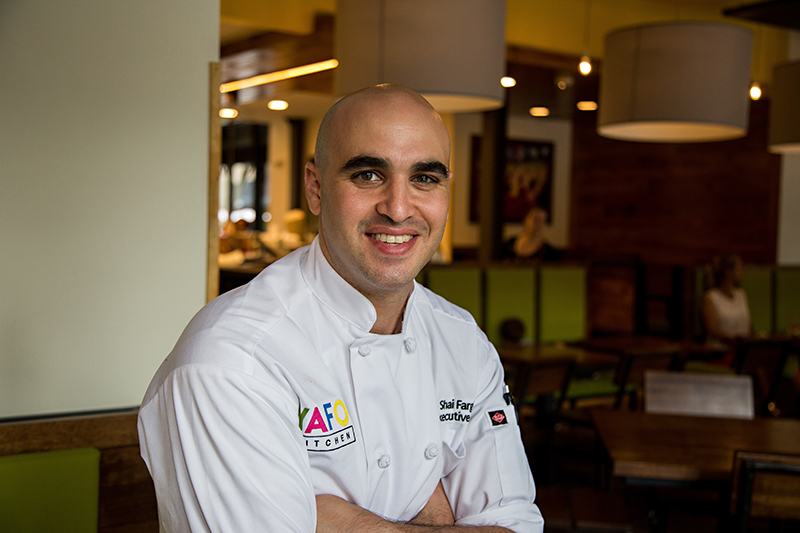 Did I mention that I’m hungry?

Yafo is the latest venture from serial restaurateur Frank Scibelli (Mama Ricotta’s, Midwood Smokehouse, and more), though it is a departure from Scibelli’s other concepts, in that it operates as a “fast casual” restaurant. Yafo is located in a shopping center with a Barnes and Noble and an Earth Fare supermarket, on the corner of a brick building across from a high-end boutique. Inside, bright green accents pop against wooden tables. The room hums with the noise from a couple of dozen conversations. Customers order from a menu board and work their way down the line, choosing grains, proteins, and sides as they go.

Fast casual—the fastest-growing segment of the global food industry, according to restaurant trade publication QSR Magazine—works in large part because of its efficiency. You get choices, you make decisions, someone hands you a tray, and you sit down to eat. The most successful concepts win over diners by balancing that transactional experience with elevated  avors, the McDonald’s speed with Bon Appétit taste.

As I ponder all this, I find myself at the counter. It’s my turn to make a decision. I order three mezzes ($7.99), the Middle Eastern version of a vegetable plate: roasted beet salad, chickpea and red pepper salad, and hummus. Getting through the line and getting a fork in my hand takes maybe 90 seconds.

The beets are tender and pair well with a scoop of sweet, creamy goat cheese balanced at the top of the pile. Scattered pistachios add crunch. The chickpeas, flecked with bright strips of roasted red pepper, are refreshingly chilly for a hot summer day, with fruity olive oil and the bracing acidity of lemon juice completing each bite. As expected, the hummus is fresh, garlicky, and delicious with hunks of still-warm flatbread.

Scibelli wants to expand Yafo to other locations, and it’s easy to see why the concept will be popular. The menu offers something for straightforward palates—rotisserie chicken, roasted potatoes, and mac-andcheese—as well as those with vegetarian or vegan diets. Many of the dishes, such as falafel and shawarma, are familiar to fans of Middle Eastern cuisine. On a previous visit, I filled up on the Marrakesh lamb wrap ($12.99), which folds lamb, yogurt dressing, and veggies into laffah.

As I mop the last of my hummus from the inside of the bowl, I look back at the line, which is longer than it was when I arrived. A mom points out the lamb on the rotisserie to her son. People crane their necks to see the brightly colored mezzes. They’re hungry—but they won’t be for long. 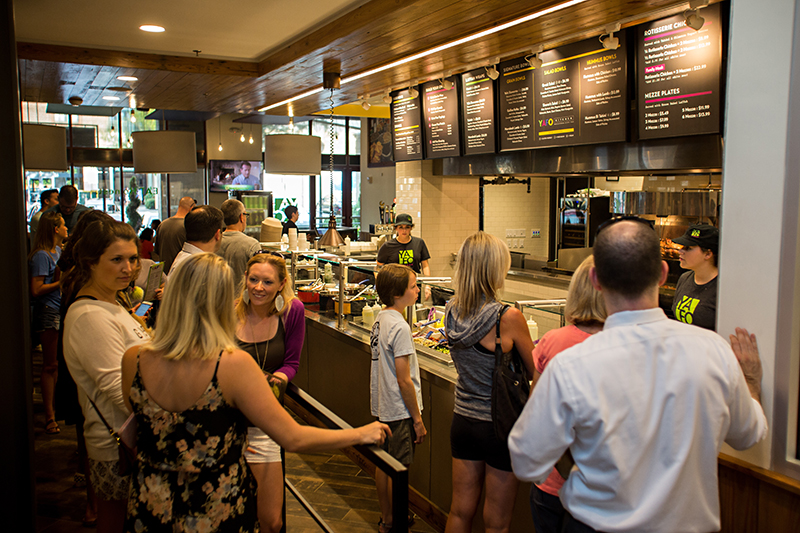 This article appears in the October 2016 issue of Charlotte magazine.
Categories: Food + Drink, In Print
Contest of the Month