MAGGIE TAPP owns her lack of design sense. She’s not ashamed to say that she can’t pick out paint colors, select light fixtures, or tell whether a lamp is from Target. But she knows what she likes when she sees it, and that’s where interior designer Anne Buresh comes in.

Buresh, owner of Anne Buresh Interior Design, led Maggie and her husband, Kevin, through a redesign of their Myers Park home that was painless—and even fun.

“Anne was my guide and interpreter,” explains Maggie, a senior vice president for a national behavioral health care company and a clinical social worker. “I’m totally comfortable with acknowledging that I don’t have this skill set—no sooner could you go upstairs and solve someone’s mental health crisis.”

Maggie’s office is on the second floor of the couple’s two-story home, and it’s also where her design adventure with Buresh began. Three years ago, her company’s office near the airport closed. “That was the catalyst,” explains Maggie. “I needed to work from home.”

Luckily for the Tapps, their son, 13-year-old Maddox, is best friends with Buresh’s son, Hunter, at Providence Day School, so they developed a friendship with Buresh long before any vision boards were created. Maddox had even suggested to his mom that she call “Mrs. Buresh” for some decorating help. When Maggie’s office dilemma came up, she did just that.

The Tapps turned their 11-year-old daughter Avery’s bedroom into an office and converted the guest bedroom into a more grown-up room for Avery—one that could carry her through high school graduation. Soon the pink walls of Avery’s former room were painted soft green and a cocoa sleeper sofa was placed against the wall across from a contemporary desk flanked by dormers.

“Everything had to be scaled perfectly because we had this slant here [with the dormers], and the computer had to sit on her desk. That little [desk] lamp had to be that size,” explains Anne, adding that Maggie needed a large computer monitor for work. “When you look at it, you say, ‘This is great,’ but then when you go over it piece by piece, it’s tricky.” 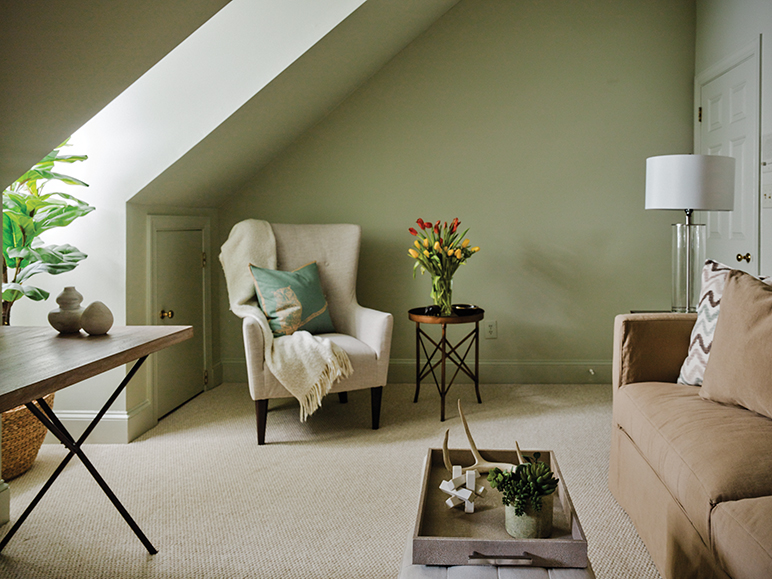 The result is a Zen office space with an organic feel, complete with framed pictures of bird eggs and throw pillows with owls on them. “It’s nice to have a place where I can close the door and get stuff done, but that doesn’t feel like I’m tucked in some closet upstairs,” says Maggie. “My son has taken to doing his homework in here at night when everyone goes to bed.”

Next door to her office is Avery’s room. Painted in a whimsical robin’s egg blue and punctuated with a custom turquoise bead chandelier with hot pink trim, the 11-year-old’s space features two full beds to accommodate frequent sleepovers. The room initially had a king-size bed that did not use the space efficiently. Custom headboards, featuring a floral fabric based on the colors of a drawing Avery had made, were cleverly notched to fit the baseboards.

At the same time Buresh was working upstairs, the Tapps were in the initial stages of creating an outdoor room for their family, as they had recently had a retaining wall built. With a sizable lot, the house was the perfect fit for outdoor living.

Buresh initially selected furniture for the outdoor space, and a year later she worked with a team from Andrew Roby to build a vaulted beadboard ceiling over the space, working around an existing outdoor fireplace. “What we wanted was somewhere where our family could just hang out, and there’s always extra kids and extra people,” explains Maggie. “We actually hosted Thanksgiving dinner out here. We pulled all of the furniture out of the way and rented some ugly tables and lined it up.”

After seeing Buresh’s work upstairs, the Tapps brought her on to decorate more rooms, including the kitchen.

After the couple saw the results of Buresh’s first projects for them, they asked her to begin working her magic on the foyer, powder room, living room, dining room, and kitchen. But there was a catch.

Kevin, who Maggie describes as sentimental, insisted on keeping the brown leather couch the couple purchased at ABC Carpet and Home in New York City when they were just starting out. It’s the same couch they laid Maddox on when they brought him home from the hospital. They also wanted to keep the teacart Maggie’s mother bought as a gift for her own mother, Maggie’s mother’s china cabinet, and a set of chairs in the kitchen’s sitting area.

With those directives, Buresh turned the brown leather eyesore into an elegant underpinning for the living room, which is now painted in a light ivory. Above the couch is a large painting by the Tapp’s next-door neighbor, Elizabeth Ross. Buresh captured the slight periwinkle hues from it with table lamps by Aerin Lauder and custom pillows. “The place I would go is, ‘Let’s paint the walls blue,’ ” interjects a smiling Maggie, “and Anne said, ‘That’s not how it works.’ ” 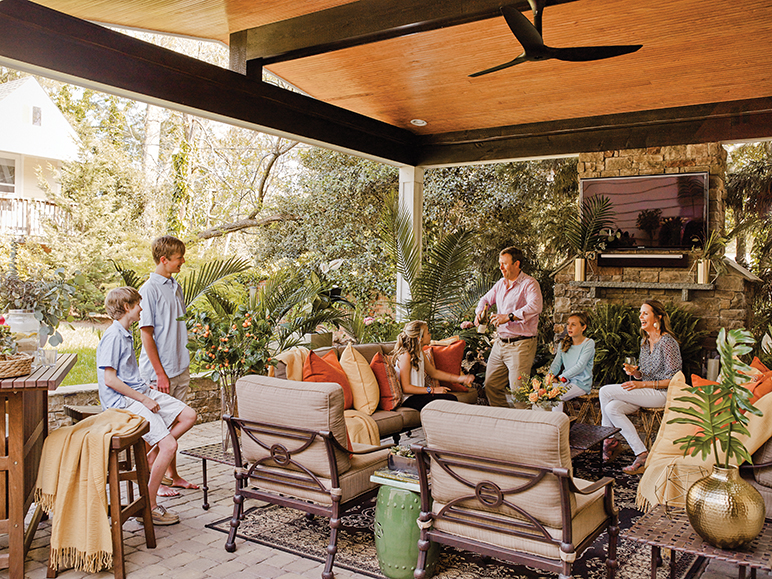 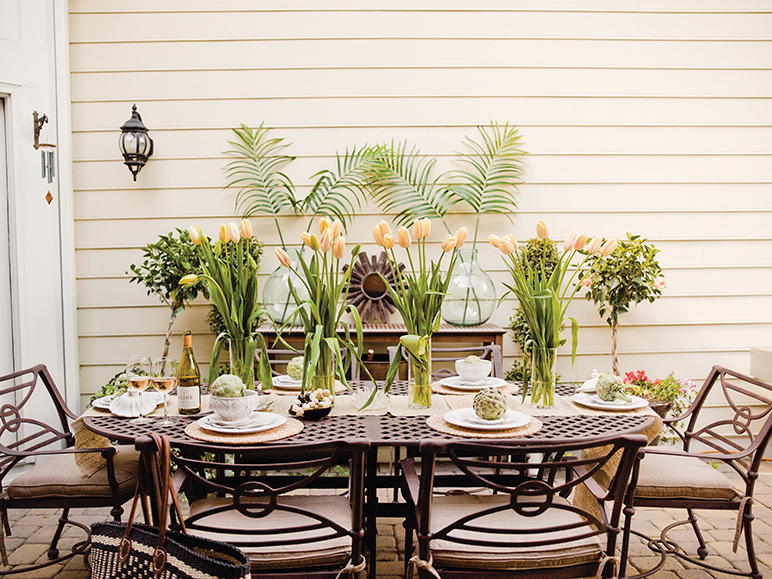 The Tapps spend a lot of time with friends and family outside. They even hosted Thanksgiving in the new space.

Across from the couch are two chairs by Hickory Chair upholstered in ivory linen with antique brass nail-head trim. The same chairs surround a round dining table the family previously owned. A large sphere chandelier by Aerin Lauder echoes the table, the curve of the side window, and the wheel of Maggie’s teacart. In another corner sits Maggie’s mother’s china cabinet.

“A lot of people have formal dining rooms, and they don’t use them,” says Maggie. “We’ll use it on a Tuesday night to celebrate someone getting an A on a math test. We might have paper plates on the table, but we do that.”

The countertops in the kitchen were replaced with granite during an earlier renovation, so Buresh further updated the look by having the cabinets painted in a neutral, changing the hardware, and stuffing and reupholstering the chairs that Kevin wanted to keep in a cocoa brown.

In the downstairs powder room, Buresh released Maggie’s wild side by painting the walls and the ceiling in a teal gloss. A large gold leaf mirror by Barry Dixon gives the space an edgy, New York feeling.

When Buresh revealed the completed spaces to the Tapps, Maggie was overwhelmed with joy. The rooms perfectly captured her family’s lifestyle and personality. She even cried.

“Lots of people can make a room really pretty, but not everybody can make a space that fits the person,” says Maggie. “You’ve got to know what your strengths are and find people that can help you play off of it.”

This article appears in the July 2016 issue of Home + Garden.
Categories: Feature
Contest of the Month