A Scoop of Heaven

Admit it. When you’re all alone and it’s late at night, you put down the Grisham thriller and tiptoe to the freezer for a ladle of creamy vanilla or butter pecan. But what do you do when you don’t have a carton waiting for you? 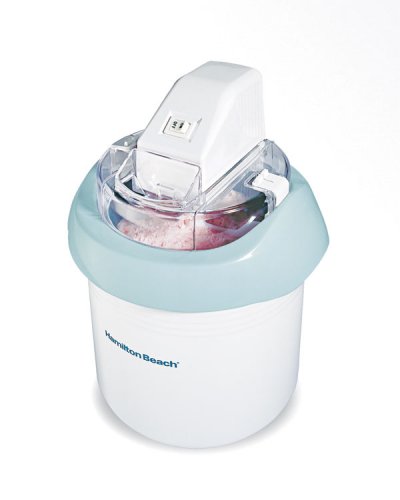 Admit it. When you’re all alone and it’s late at night, you put down the Grisham thriller and tiptoe to the freezer for a ladle of creamy vanilla or butter pecan. But what do you do when you don’t have a carton waiting for you? You make it yourself. Here are five ice cream makers that help calm those late-night dessert cravings when the grocery store is closed.
Note: Making a pint of ice cream is not as quick and easy as baking a batch of cookies. Several of the following models include a convenient “freezer bowl” that needs to be frozen for eight to nine hours prior to starting the machine. We recommend preparing the ingredients at the same time you put the base in the freezer, to allow enough time for the flavors to mesh in the fridge. You’ll also need patience while the mixed product freezes for one to two hours before serving.

Cuisinart Mix It In™ Ice Cream Maker
Available online at www.cuisinartwebstore.com $99.99
Cuisinart enables dessert lovers everywhere to combine fresh, homemade ice cream or frozen custard with whatever topping they choose. It’s the most complicated and spacious model we tested, but the many parts produce a silky result. It’s best to set it up when you have a lot of ice cream to make, but notify hungry guests of the twenty-minute lead time between batches. There are three separate compartments to whisk in sprinkles, M&M’s, chocolate chips, or whatever topping you crave, but make sure the item is small enough to fit through the condiment dispenser, a.k.a. chop up whatever it is (i.e., walnuts). Though the ice cream is meant to be enjoyed immediately, we found it to be a little mushy, so you may want to stick it in the deep freeze for a few minutes before devouring.

Donvier Ice Cream Maker
Available online at www.kitchenshop.com $49.95
This cutie isn’t automatic, and we’re lazy. It’s super easy to set up and clean, makes no noise, but is an attention hog. When you’re ready to make the ice cream, pour your chilled mixture into the Chillfast cylinder, put on the lid, and turn the handle clockwise three to four times. Then, wait two to three minutes, turn three to four times and continue the process for twenty minutes. The final texture is a little too icy in parts, too slimy in others, but if your recipe is right, it tastes fantastic. You must keep in mind that the experience of making ice cream is just as important as the product itself, but busy-body-workaholic readers better stick with a quick Ben & Jerry’s run for their fix instead.

Deni Automatic Ice Cream Maker with Candy Crusher
Linens & Things $59.99
The Deni was competitive with the other makers, but was rather loud when it made its gooey ice cream magic. In spite of the noise, it still produced really good ice cream with
a creamy consistency and perfect combination of ingredients—yummy candy pieces. The candy crusher only works well with very cold candy (we tried cookie dough, which was simply smashed in the process). In reading the product guide, we learned it also substitutes as a blender for piña coladas, frozen daiquiris, or icy thick margaritas.

Play & Freeze Ice Cream Maker (pint size) REI
11067 Carolina Place Parkway, Pineville, 704-341-7405
This little guy is cute, easy to assemble, and certainly fun, but we found little value in the end product. In one end goes a bunch of ice and rock salt, ingredients in the other. Shake it, roll it, throw it up and down, and, allegedly, a pint of ice cream is ready and waiting for you. This would work well while camping, or for kids to play with while you’re preparing French vanilla in one of the grown-up machines, above, but the actual ice cream is difficult to extract from the device, and too frozen to really enjoy.

Editor’s Choice
Hamilton Beach Gel Ice Cream Maker
Target $29.99
In addition to the freezer bowl, this maker has few other parts, making it very easy to set up and clean. After assembly, plug it in and allow the plastic churn blade to swirl. Add the ice cream mixture, and then it’s ready to freeze. Our coconut vanilla recipe rivaled that of a farmland creamery, but a good practice with any new appliance is to follow all directions in their entirety. We didn’t, and learned a very messy lesson when our first batch tripled in size…onto the counter. Note to self: The maximum capacity of this and many others is one quart of mixture, which will increase two to three times in volume.

This article appears in the Home & Garden June 2007 issue of Home + Garden.
Categories: Home & GardenDepartments, Shopping
Contest of the Month