A Q&A with author and instructor Tracey Benson 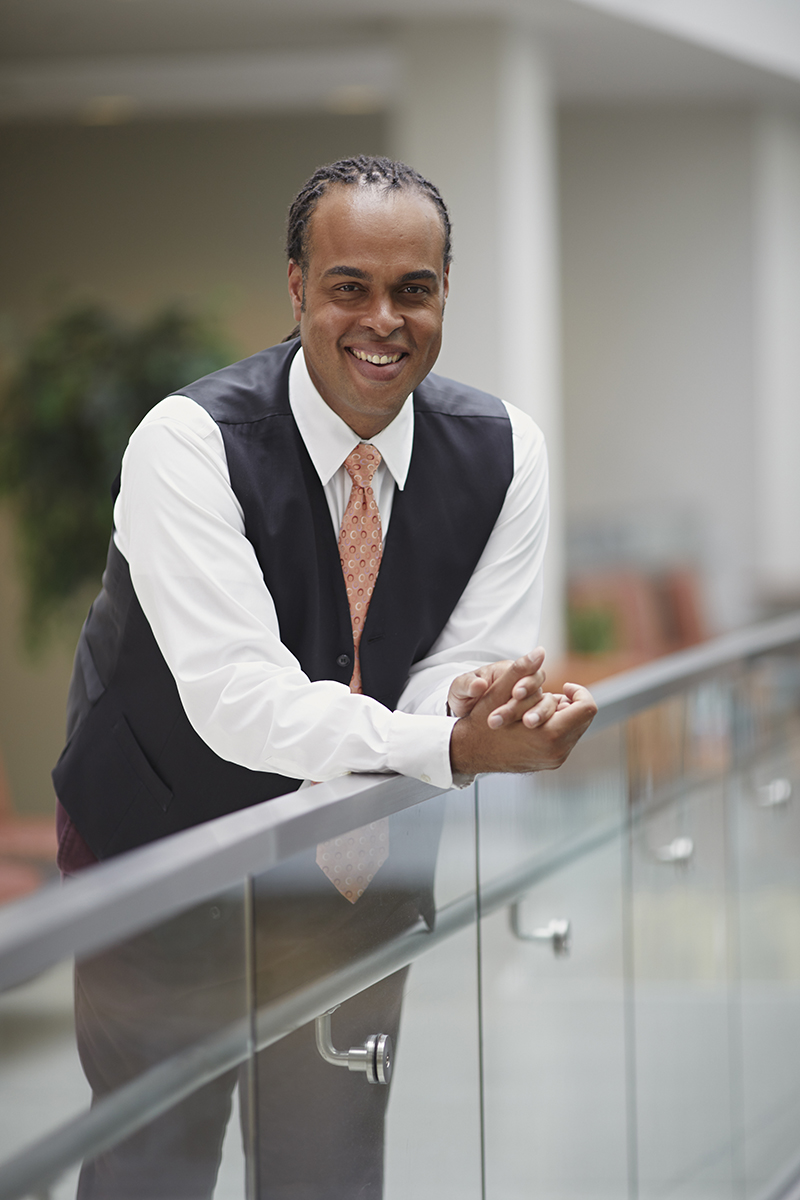 UNC Charlotte professor Tracey Benson co-authored a book last year on how educators might approach discussions about racism with their students. Photo by Rusty Williams.

Then, on Memorial Day, a Minneapolis police officer killed George Floyd, and nationwide protests followed. Benson, who also runs his own educational consultancy and workshop series, was suddenly in high demand among teachers and administrators in K-12 schools and, surprisingly, leaders from other disciplines who wanted to learn about the chronic disease of structural racism and how they might begin to treat it. His answers are as varied and complex as the issue itself but boil down to: You have to talk about it, and you can’t do that until you’re willing to acknowledge it.

Benson, 42, is a Milwaukee native who earned a master’s degree in school administration from UNC Chapel Hill in 2006 and a doctorate in Educational Leadership from Harvard in 2016. He’s taught classes and conducted research at UNCC since that year; his wife is from Matthews, and their son graduated from Mooresville High School in May. Charlotte spoke to him in June, as the Floyd protests marched on in American cities, about his ongoing research and outreach, and how the fresh reframing of race in the United States has changed the trajectory of his work. His answers are edited for length and clarity.

Charlotte magazine: How have the killing of George Floyd and the demonstrations afterward affected your work?

Tracey Benson: Well, the reason we wrote the book and I studied structural racism is because it’s something that’s been an issue in education during my lifetime and even before, so this is an issue that’s always been present but which we’ve never really paid attention to. We recognize that there’s an achievement gap, we recognize the school-to-prison pipeline, we recognize that students of color have been relegated to under-resourced schools with teachers who aren’t as experienced as in high-income schools. So these are all things that we recognize are present in education, but we’ve accepted them as is.

Educators, especially white educators, really want to know what they can do. This point in time has woken up white America, to say that, you know, racism is a white problem. It affects Black and brown people, but it’s a problem that exists among white people who perpetuate it, and now they need to come together and work to fight against it.

CM: You’ve spoken about this wall of defensiveness white people can put up any time you try to have some sort of discussion about race, and it can be a real task to try to break down that wall. Do you think that’s what’s been happening since the killing of George Floyd?

TB: I find that it’s really increased the consciousness about racism as a problem. I think that’s what educators are looking for right now: How can I be anti-racist in my circle of influence in my school, in my school community, as a teacher, as leaders within the school building? Because I think that it’s been so normalized in education that folks need to make the connection that the racism that killed George Floyd is the same racism that exists in schools.

CM: Are you aiming for a specific kind of outcome in these discussions?

TB: We’re aiming for them to share. Like, what have you learned about race? What have you learned about, you know, folks with brown skin? Do you know any Latinos? What do you know about that? What did you learn it from? Let’s talk about that. We all need to be accepting of one another. But at the same time, we need to acknowledge difference. And we need to acknowledge what racism is. It teaches us not to like each other based on our skin color, and that’s something that shouldn’t be. So we bring them back to the center of humanitarianism but also allow them to express how they feel and where they learn these things.

CM: I know it’s summer break, so since Memorial Day, when George Floyd was killed, what kinds of specific interactions have you had with other educators in the course of your work?

TB: Hoo boy, it’s been fast and furious. The book came out in August (2019) and sold pretty well in the beginning. I had a few speaking engagements, folks bought the book, I did book studies, a few organizations adopted the book, and then COVID-19 hit. Then what got all the attention was distance learning, how to keep the school year going, and making a big shift in how we deliver education. So I started offering free, open community conversations on equity in virtual learning, because what virtual learning did is really exacerbate issues that were there already. We already knew that we had a huge technology gap in schools that were low-income and predominantly Black and brown. So when we went to virtual learning, a lot of these students didn’t have one-to-one technology or access to WiFi, and in majority-Black and brown and low-income schools, we have a lot of novice teachers and instructors, and that became exacerbated when these novice instructors then had to teach virtually. We had more disengaged students, more students who weren’t able to access the curriculum, and teachers who were really struggling with becoming technologically literate. So I held the free community forums because people were struggling, and they really didn’t know what to do, and I’d already been working with school districts around equity prior to COVID.

CM: Where do you take your work from here?

TB: My research is going to hold steady, and I hope it becomes more relevant in terms of folks willing to read the research on racism in education and actually incorporate anti-racist frameworks into the way schools are run. That’s the hope, because there’s a greater attention now on understanding that anti-racism is important … What I’ve said to educators who come to me for support is that we have to understand that these four police officers with George Floyd in that incident were, at some point, students in somebody’s classroom. What could have been different if those teachers chose to have conversations about racism and the impact of racism?

This article appears in the September 2020 issue of Charlotte magazine.
Categories: The Buzz