A Woman’s Place in the Kitchen

THIRTEEN TALENTED black female chefs and mixologists gather in the kitchen of Loft & Cellar on December 12.

They’re preparing dishes for the pop-up dinner series Soul Food Sessions, which celebrates and supports people of color in the restaurant industry. The women call themselves the Soul Sisters, and the dinner is named as such. Together, they created a menu that pays homage to their “black granny” figures and salutes the sisterhood that exists in the culinary arts. 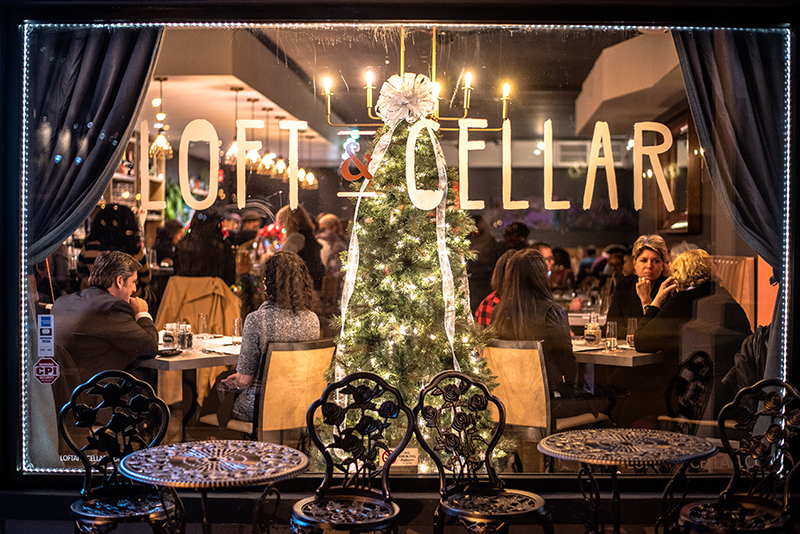 “Women created and evolved the kitchen,” says Subrina Collier, one of the founders of Soul Food Sessions. “We are so much of the emotion and creativity behind some of the world’s greatest dishes, and we are taking our voice back.”

We caught up with five of the Soul Sisters to find out how they’re redefining a woman’s place in the kitchen, and how they’re creating more opportunities for females in the restaurant industry. 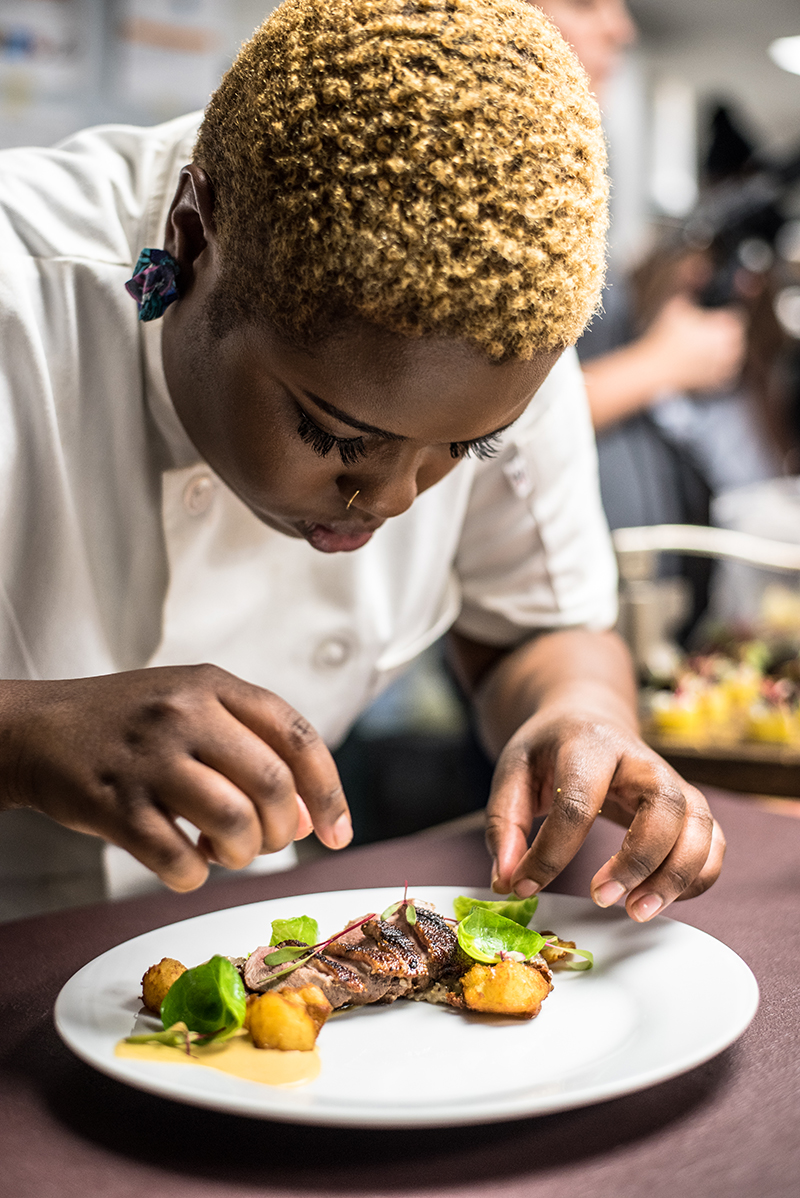 What was a ‘woman’s place’ in the kitchen to you growing up?
Cooking breakfast, making lunches and snacks for the day, cooking dinner, and baking dessert.

How do you define a ‘woman’s place’ in the kitchen today?
We bust ass like the men and sometimes more, to be honest. It sometimes feels like we don’t get the respect we deserve, especially since we hold it down. Our confidence levels have reached an all-time high.

Why do you think female chefs make up such a small percentage of the culinary industry?
Because white men (in particular) hate not being in control of every little thing. 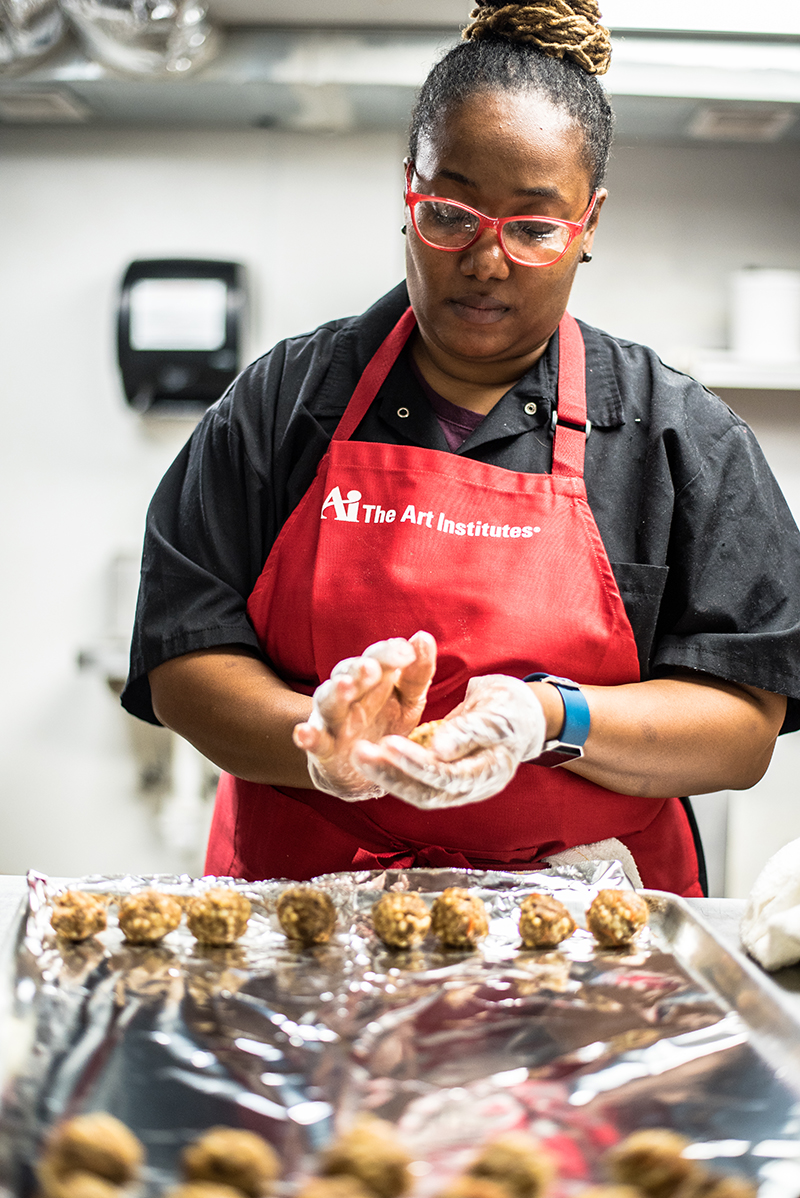 Who was your ‘black granny’ figure when you were growing up?
Laura Beard, aka “MiMi,” my great-grandmother. She was a beast in the kitchen. She had her own garden. She grew everything from grapes to apples to collard greens to watermelons.

What is your quintessential ‘black granny’ dish?
MiMi’s collard greens. It had a certain ‘je ne sais quoi.’ It was loaded with fatbacks and love. I’ve had a lot of collard greens, and nothing compares to hers, not even mine.

Why do you think female chefs make up such a small percentage of the culinary industry?
Back in the ’40s and ’50s, a ‘woman’s role’ was to stay at home, while the man worked and created businesses. When cafés and restaurants were being opened, this was happening by men. As the industry progressed, it did so with the silent mindset that women would run the kitchen at home, and the men would run the cafés and restaurants. Women were never thought of to be the backbone of the kitchen outside the home. They could be waitresses and secretaries, but not anything that would give them authority over men. 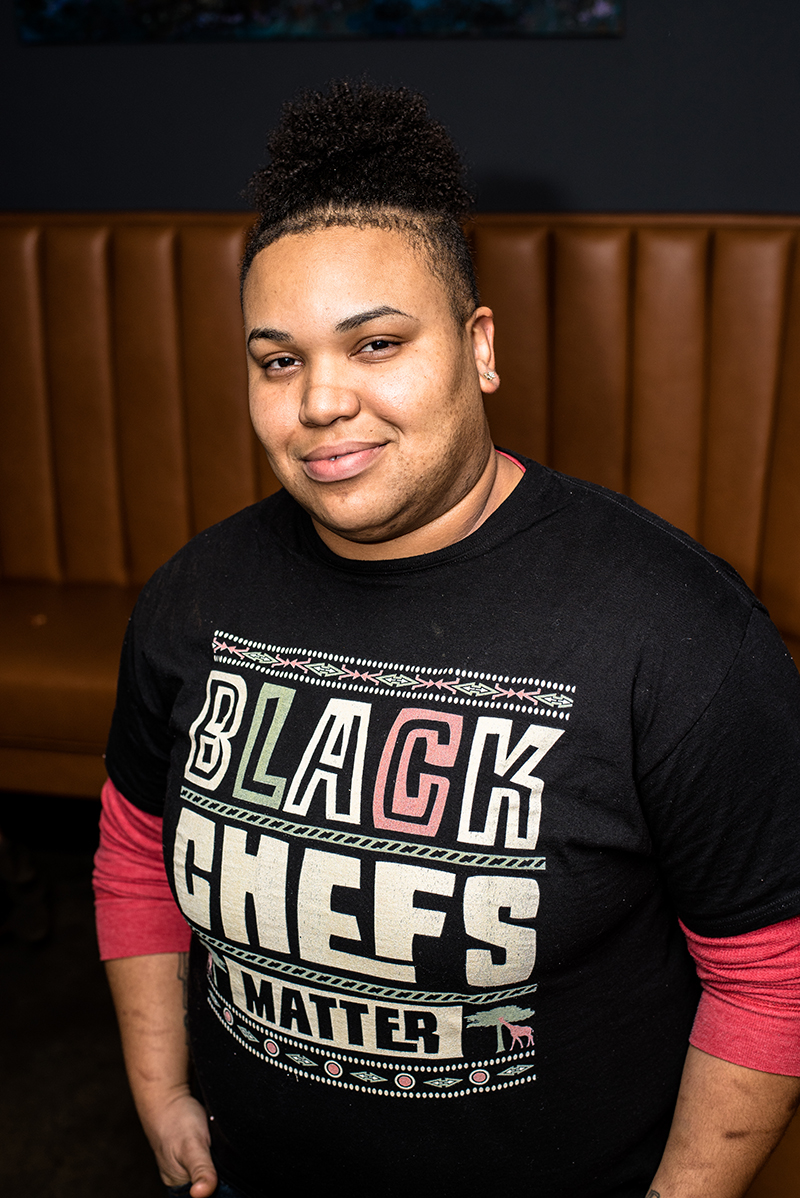 How do you define a ‘woman’s place’ in the kitchen today?
Today, a woman’s place is wherever a strong-willed woman sees fit. At the end of the day, no one can deny hard work, male or female.

Who was your ‘black granny’ figure when you were growing up?
My ‘black granny’ was in fact my grandmother.  From three years old, I was in the kitchen, always watching her, tasting the things she made, learning her techniques for flavor, never measuring, but always by taste and feel.

What is your quintessential ‘black granny’ dish?
Collard greens. This dish took time and love. From the minute my grandfather bought the greens from the garden, we would wash, clean from the stems, chop, and cook the greens, tasting along the way until the seasoning and texture was just right. 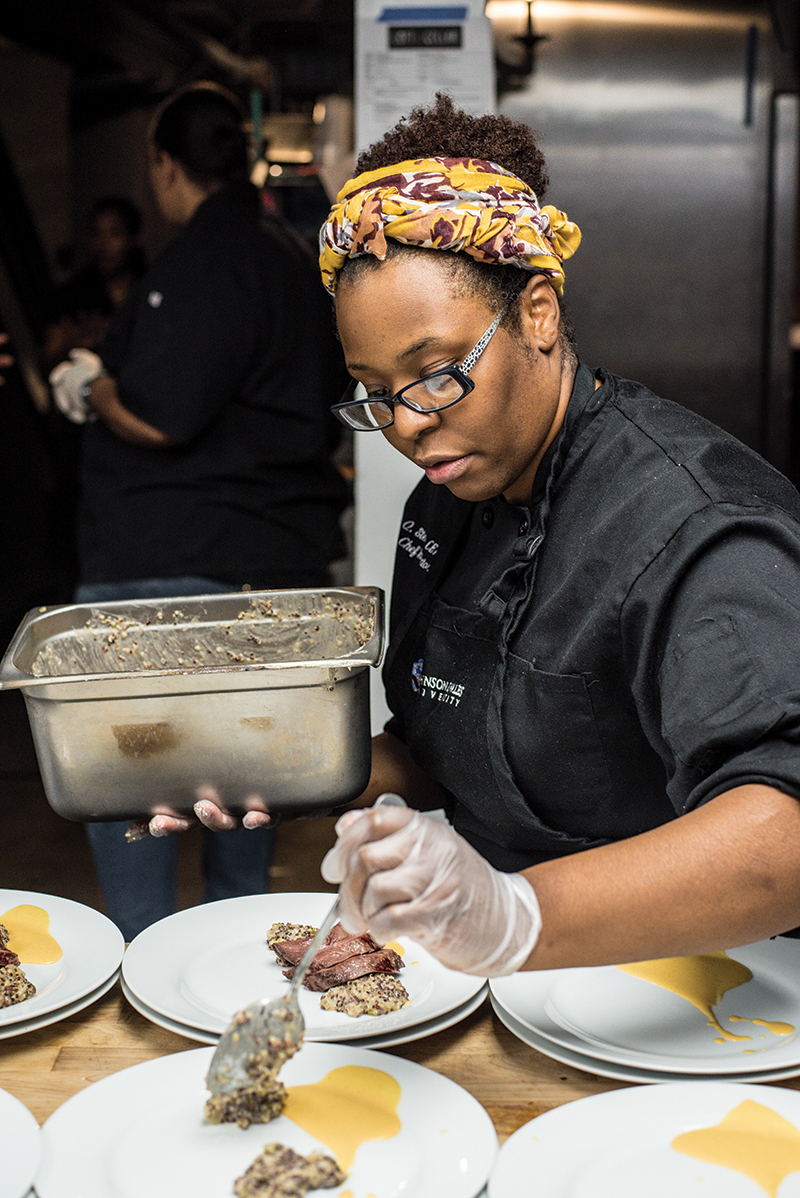 What was a ‘woman’s place’ in the kitchen to you growing up?
A women’s place was in the kitchen, for sure. I had a great surrounding of women in all aspects of food, from in the home, out in the fields farming their own land, and owning/operating their own restaurants.

Why do you think female chefs make up such a small percentage of the culinary industry?
I think it’s a cultural order that has been ingrained for thousands of years. Those gender roles just continue to play out, and that’s one that’s hard to break. It is interesting, in my opinion, that my male counterparts can point to their mother’s or grandmother’s cooking as an influence, and I find many times can diminish that role just as quickly. And that stereotype about mom or grandma not being cultured or ‘learned’ perpetuates today, even though women operate at just as an elite level as male chefs. As a woman chef, oftentimes it is assumed that your food will taste good, but not be refined or look the part. We cannot praise on one hand, then take our mom and grandma’s masterpieces and plagiarize them as an evolved version of our own doing, when what makes that food timeless is its authenticity.

Who was your ‘black granny’ figure when you were growing up?
I think that phrase sort of diminishes her power. My great-grandmother was more than just a little sweet granny, though she was later in life. I was introduced to her in stories from my great-aunts and uncle about how she started from nothing. She saved every penny for those places, she did domestic work, literally ‘the help,’ until she could get the places up and running. A savvy businesswoman, a shrewd entrepreneur, purchasing homes and cars in cash from the profits of her small empire, and sowing that wealth back into her family. All of this off of the back of the Depression, in the thick of Jim Crow and segregation.

Moving forward, how can we redefine a ‘woman’s place’ in the kitchen?
Stop pushing the old narrative and start recognizing both the past for what they have accomplished and holding them in the same regard as male culinarians in history. 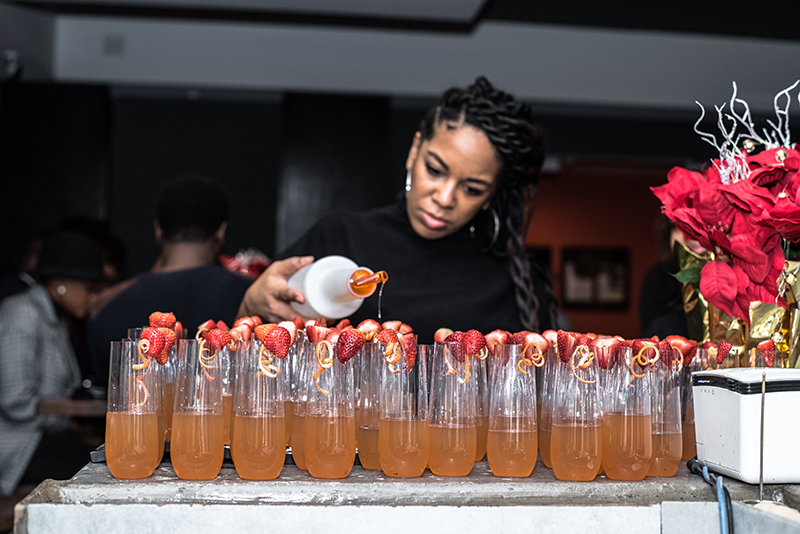 Clark prepares drinks for the crowd.

Why do you think female chefs make up such a small percentage of the culinary industry?
I think most marginalized people get ‘put in (their) place’ at the very beginning. It’s unfortunate, but it’s everyone’s job to have these hard discussions and be the change that we wish to see in the world.

Who was your ‘black granny’ figure when you were growing up?
It was my maternal grandmother, a.k.a. my Nana. She still keeps us all together ’til this day, even though she’s long left us.

What is the quintessential ‘black granny’ recipe or dish for you and why?
Native skillet corn cakes. I still to this day don’t know how my Nana got her masa the way she did, but the taste, texture … everything was just so perfect.

Moving forward, how can we redefine a ‘woman’s place’ in the kitchen?
Simply giving people the opportunity without bias. If someone shows interest, they literally can’t be great unless they try.

This article appears in the February 2019 issue of Charlotte magazine.
Categories: Food + Drink, In Print