After UNCC Shooting, Student Journalists Show the Strength of a #LockdownGeneration

Niner Times knew right away how to handle the worst

THE MAC SCREEN GLOWS on the lenses of Nikolai Mather’s horn-rimmed glasses as he checks his Twitter direct messages and notifications on the Niner Times website. He pauses, turns to the other students in the room, and holds up a Ziploc bag of supplies. “I have an unused toothbrush, toothpaste, Advil …,” he says, “in case anyone needs anything.”

A half-dozen student journalists barely look up from their monitors, lined up on long desks along the perimeter of the paper’s office, in the basement of Popp Martin Student Union. Old newspaper cutouts are taped just below the ceiling along the walls, like yellowed crown moldings. A collage of memes covers a bulletin board just above Alexandria Sands, Niner Times’ community editor, and Mather, an assistant editor.

“All I have is a granola bar and a banana,” adds Madison Dobrzenski, the paper’s incoming editor-in-chief, “but I’m willing to share.” 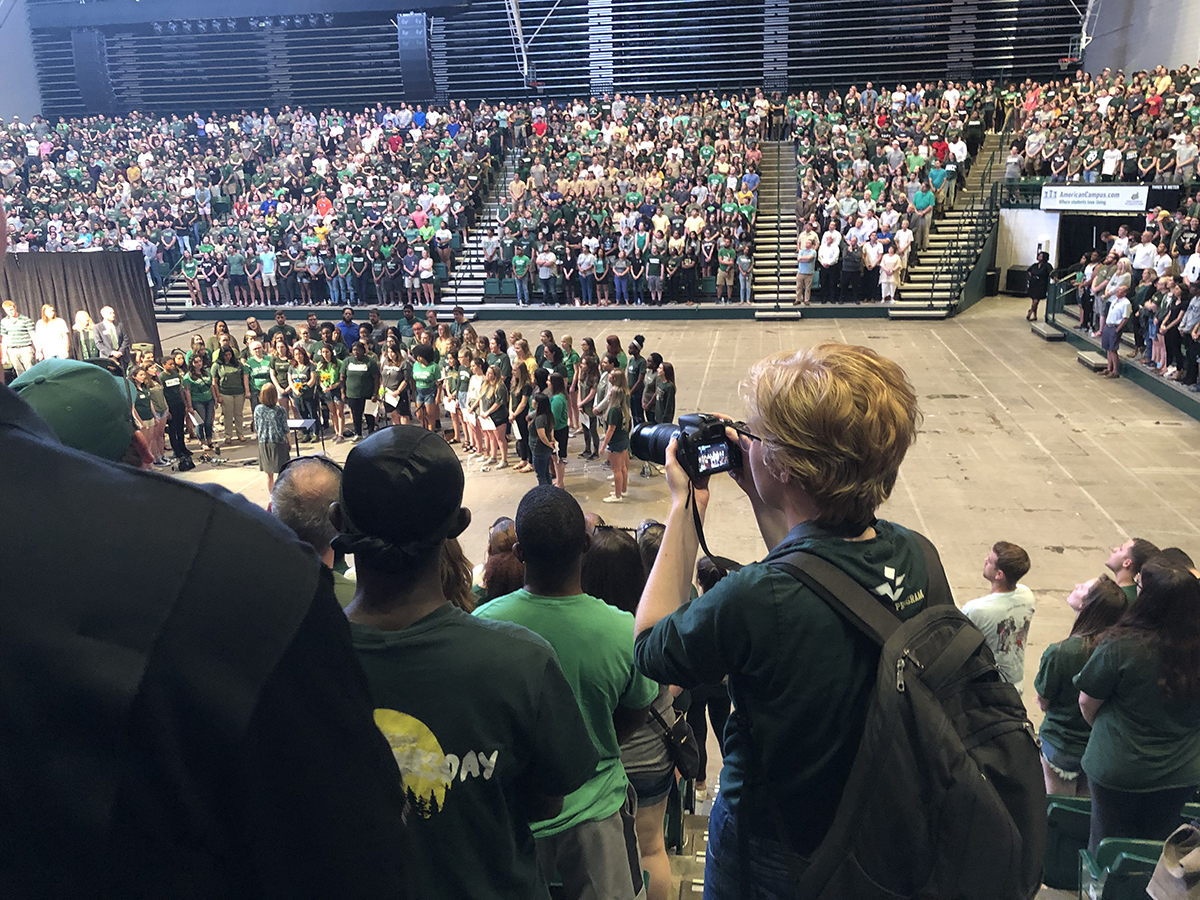 It’s the afternoon of Wednesday, May 1. Twenty-two hours have passed since a former student entered Kennedy Hall 236 on UNC Charlotte’s campus with a loaded handgun and opened fire, killing two students, Riley Howell and Ellis Parlier, and injuring four, including Drew Pescaro, a Niner Times sportswriter. Chancellor Philip Dubois has called it “the saddest day in UNC Charlotte's history.”

The student-run newspaper published its planned last issue of the semester that same day, the last day of classes. Jeffrey Kopp, Niner Times’ editor-in-chief, had begun to pass on his responsibilities to Dobrzenski. Sands, also serves a Charlotte magazine editorial intern, tweeted just three hours before the shooting that she was “officially a retired college newspaper editor. Thank you for letting me tell your stories, #UNCC.”

In the hours after the news broke, the student journalists, some still on lockdown, worked mostly from their phones. They posted their breaking news tweet one minute after the NinerAlert, the campus’ internal emergency alert system. They worked on little or no sleep and no pay, and they published six stories in the first day, running on adrenaline and the generosity of others.

“Who should I thank for the pizza?” Mather asks, turning away from his computer again. Half-eaten boxes of Papa John’s and Domino’s cover a table in the middle of the office. They’re gifts from other newspapers— the University of North Florida’s student paper, Spinnaker, provided lunch, and The Charlotte Observer sent dinner.

Mather tweets a “thank you” to both publications and gets back to work. In his office, Kopp talks to two alumni and former editors of the paper. Sands inserts earbuds and transcribes an earlier press conference.

Mather pulls out another bag of supplies from his bookbag and addresses the room: “I also have anti-diarrhea medicine if that pizza gets to you.”

FOR STUDENTS TODAY, the question is less about if a campus shooting will reach their school, but when. In spring 1999, two teenaged gunmen killed 13 people at Columbine High School in Littleton, Colorado, at the time the deadliest school shooting in American history. The record, in just 20 years, has been topped three times: Virginia Tech in 2007, Sandy Hook in 2012, and Parkland in 2018.

Sands, a graduating senior at UNC Charlotte, was three when Columbine happened. College students today were in elementary school when 33 were killed at Virginia Tech. Most have never known a time when school shootings weren’t a threat. 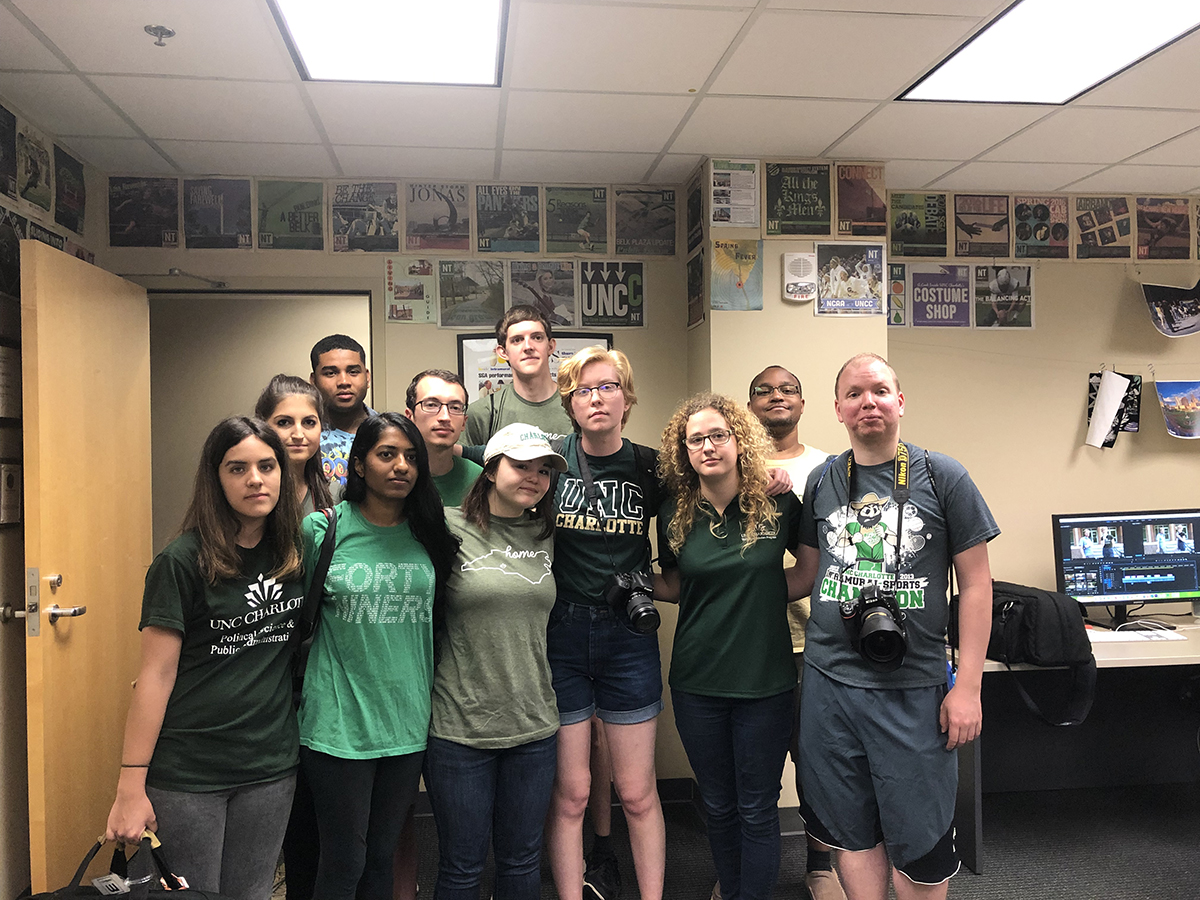 “You wouldn’t expect it to happen,” Sands tells me two days later. “But you’re also not surprised when it does happen.”

In recent years, students have used the hashtags #GenerationLockdown and #LockdownGeneration on social media, and UNCC students echoed them in the days after their shootings. Students understand that their generation faces unprecedented danger, the genuine and constant threat of the worst. So when the worst happens, students don’t have to stop to think about what to do. They just do.

Kopp was walking home from his office in the “Union” basement when he saw students running out of Atkins Library yelling, “Shooter!” He ran the other way, got into a fellow student’s car, and ended up at a nearby Target. Chris Crews, a photographer, took a couple of pictures outside the library, where dozens of Charlotte-Mecklenburg Police cars congregated.

Elissa Miller, the paper’s arts and entertainment editor, headed to the now-closed O’Charley’s on University City Boulevard for a press briefing. “Everyone else was stuck on campus, for the most part, and couldn’t leave …,” Miller told me Tuesday night. “I’d never reported on anything like that before … I’m not the news journalist for us. (I felt like) I did not know what I was doing.

“I just needed to be doing something.”

LATE THE NEXT AFTERNOON, about an hour before a memorial vigil at Halton Arena, Kopp and Dobrzenski gather the editorial team to discuss coverage plans. Everyone wears green. A couple of reporters snack on leftover, room-temperature pizza.

“Can people be allowed to be anonymous?” It’s against their normal guidelines, Kopp says, but in this case, he’d consider it. “But we shouldn’t offer that,” Sands adds. Everyone in the room agrees, and Dobrzenski scribbles a note on the white board.

“Should we approach students for comments at the vigil?” No, the team decides, but we should listen if they want to share. Mather suggests they hold signs, and he starts to scrawl the letters in black Sharpie on white posterboard: “If you want to share your experience, find us @NinerTimes.”

Thousands of students, alumni, parents, and friends of the college pack Halton Arena, where, Dubois has assured everyone during a news conference earlier in the afternoon, commencement ceremonies on May 10 and 11 will go on as planned. The crowd files in through doorways where volunteers offer tissues, and Sands takes pictures of students who accept. There aren’t enough seats for everyone.

Dubois holds back tears as he speaks. “We can’t bring them back,” he says. “But with your help, we will find a way to remember their presence as 49ers.”

As thousands of people exit the arena, heading outside to a candlelight vigil, a chant grows louder and louder.

THE NEXT DAY, May 2, the team announces they’re going to put out a new print issue. It’s been two days since the Niner Times released what they thought would be their last issue of the semester, since they thought they could celebrate, relax, and, for many of them, prepare for graduation.

It’s been two days since everything changed.

As of press time, Drew Pescaro, the sportswriter who was shot, was still hospitalized but expected to recover, as were the other three—Sean DeHart, Rami Alramadhan, and Emily Houpt. Mather, Sands, Crews, Kopp, Dobrzenski, Miller, and many other Niner Times staff members hadn’t stopped working. They planned to send their next issue to the printer Sunday and have them delivered to campus on Tuesday, exactly one week after the shooting. It’ll have only news and opinion stories and eight color pages instead of the usual two.

The original version of this story appeared online here.