All in the Family

After completing their custom home in Davidson, Skip and Beth Sullivan can look back happily at their decision to leave behind an older house in favor of a home stamped with Southwestern flair

Beth Knox Sullivan spent many of her childhood summer days on horseback, traversing fields in Davidson, often galloping past a house that her parents, accomplished real estate brokers who founded Knox Realty, had listed for sale. When it came time to design a home for her husband and kids, her vision was filled with images of family and elements of the great outdoors. 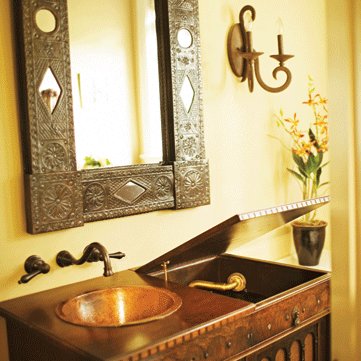 “Our first house was built by my dad, and it was on the banks of a creek that I played on when I grew up. I told the owner that if he ever sold, we’d love to buy it,” Beth recalls of her first home in Davidson with her husband, Skip. “We lived there for fifteen years and painted every wall, changed the rooms, gutted the kitchen, landscaped the yard until we could do no more.”

Then in 2001, Beth’s father, Russell Knox, who was battling Parkinson’s disease, suggested they move to a lot near her parents’ driveway and next door to one of her brothers.

“He just wanted us closer,” says Beth, a broker with Knox Realty who cherished the idea of living near her aging parents. “And so we decided to build.”

But there were challenges. The lot was close to Concord Road, one of Davidson’s busiest thoroughfares, and they worried about street noise. The land was solid prairie, without the mature trees common in other older parts of Davidson, plus it was near sweeping cow pastures, which in the summer heat could possibly give off an odor.
They hired architect Christopher Phelps to navigate their concerns and orchestrate Beth’s vision of an English-country exterior complemented with a Southwestern, lodgelike interior.

"He was only here for an hour,” Beth recalls of walking the lot with Phelps. In that hour, he listened to their priorities (a seamlessly connected living room and kitchen) and their worries (that street noise). Together with Phelps, the couple opted to build the brick house with chocolate-brown trim on a bend that carried it away from Concord Road and optimized its placement on the acre lot.

“You don’t see any other house through a window, just the land and the cow pastures,” Skip, a nurse anesthetist, says. “It looks like we’re in the country, like something you would look for in a vacation house."

With the design complete and Fine Homes Inc. building the 4,250-square-foot house, Beth set her sights on the interior.

“I pulled pictures for years of stuff I liked, and I had files by rooms,” she says. “I had very definite ideas. We started with a picture of the fireplace.”

The stone fireplace in the living room, crafted by Morris Stoneworks, spans the height of the wall, dramatically meeting the vaulted ceiling lined in tongue-and-groove pine beadboard. When Beth spotted a photo of the perfect mantel, a family friend took care of it.

“The mantel was given to us as a housewarming gift. It’s chestnut complete with the worm holes,” says Beth of the wood believed to be more than a hundred years old.

To further anchor the tone of the room, a painting of a team of black horses rests on the mantel. “We go out west every year to a dude ranch. [Artist] Amy Brackenbury displays her work there,” Beth begins before Skip tells how the painting came to be a part of their home.

“Beth liked it,” he says. “I acted like it wasn’t in the budget, but I told them I wanted it. It arrived here the day before our anniversary.”

A leather sofa, Southwestern-patterned oversize chairs, wide-planked Australian cypress hardwoods, and family mementos such as a citation honoring Skip’s father’s bravery while defending a police officer under attack in 1967 complete the room.

In the kitchen, a stone archway framing the GE Monogram range mirrors the fireplace in the family room while an expansive granite island allows for informal dinners with the family or entertaining guests. Turkish travertine in earthen tones and gold granite countertops complement the cherry cabinets hand built by Beth’s high school friends, Mark Thrower and Eddie Black, Charlotte firemen who made every cabinet in the house.

Because family time is still so important, the flow of the house is ideal.

“I have three brothers, and, with spouses and children, that’s seventeen people,” says Beth. “I wanted a place where everyone could gather and not be too divided up.”

The adjacent dining room is furnished in mid-1800 Jacobean pieces that Beth’s uncle gave her. An iron chandelier with Austrian crystals is a modern match while another Brackenbury painting of chickens with gold and silver undertones adds lightness to the heavier antique pieces. Across the barrel-ceiling entryway is a music room with walls of Spanish cedar and a sleek grand piano.

The foyer, with expansive windows, overlooks the veranda and nearby pastures. Outside, a brick fireplace, a gunite pool wrapped with stone, and a lush yard add functionality and vibrancy to a space that once worried them.
“Never had we talked about wanting a pool,” Beth says. “But the lot was so barren, and we thought, ‘We’re going to sit here and cook for ten years before the trees are mature,’ so we decided to do the pool, so it gave us a focal point in the backyard.”

The family, including son Luke, twelve, and daughter Sarah, eighteen, makes s’mores in the outdoor fireplace or head straight to the pool after a bike ride, a family pastime. Even Latte, their boxer, has been known to take a dip.

Skip, who jokingly called himself the “up man” during the build, as in show up, shut up, and pay up, is thrilled with Beth’s vision.

“Beth knew so much,” he says of his wife’s design decisions. “I trusted her judgment completely.”

This article appears in the Home & Garden September 2007 issue of Home + Garden.
Categories: Home & GardenFeature, Spaces
Contest of the Month