All Rise for the President

The day after an inauguration many thought would never come, I had a conversation I thought I'd never have 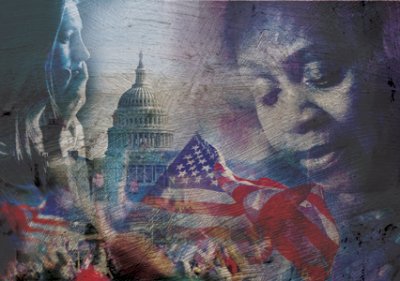 Lenora sat down at my table in the writing lab, unable to hide her joy. It was the day after Barack Obama's inauguration, and this seventy-three-year-old black woman was triumphant.

"So what did you think? Did you see it?" she asked. Studying her beautiful face, I thought about how to respond. With her stylish short hair, slim pants, and bright colors that hint at decades spent in California, Lenora Gibson could be mistaken for a woman in her fifties. I glanced at her slender hands, at the large amethyst and gold ring on one of her fingers.

My answer may have surprised her, because I did not vote for Barack Obama. For months I have had casual conversations with Lenora and Barbara Moody, who is seventy-four and also African American, about our political differences. Two decades and our race separate us — I am white and fifty-four — and the three of us work together as part-time tutors. The two women had voted for Obama while I had voted for John McCain despite grave doubts about Sarah Palin.

As the conversation unfolded, I found myself opening up to Lenora in ways I had never experienced. Something was disappearing between us. Her pride and candor allowed me to share things I had never dared to say; each of us listened to the other and asked thoughtful questions. I was shocked to hear her approval of the Rev. Jeremiah Wright's comments ("You have to hear everything he said — that quote was taken out of context") and she was, perhaps, just as astonished when I argued that many black people seem more prejudiced than whites. After years of being treated with suspicion by African Americans, and kept at arm's length, I concluded the race problem went both ways. "How is this ever going to change?" I asked Lenora. Barbara joined us. For the moment, our study center was quiet.

Barbara has intrigued me since I arrived early in March 2008; she was the first to say hello. Immaculately dressed, petite, and friendly, she is constantly being greeted by former students. Like Lenora, she could be mistaken for a woman in her fifties. She commands respect; after a half century in education, she can sniff out a lame excuse like a bloodhound. I've learned more from her about not doing someone else's work than from any professional training course. She's tough, but she's a lady. She seems to have never met a stranger.

She became involved in the civil rights movement in Charlotte during the 1960s. Her family moved here from South Carolina when she was six, and I suspect that Barbara then, as now, immediately made friends. By the 1960s, when she was in her thirties, she helped launch the local chapter of the Legal Defense Fund (LDF), an arm of the NAACP that fought discrimination. Founded by Thurgood Marshall, the fund helped to finance Marshall's historic 1954 victory against segregation in the public schools, Brown v. Board of Education. Marshall's first intern, Julius Chambers, was married to a friend of Barbara's. Chambers became a famous civil rights lawyer. He arrived in Charlotte in 1964, a year after interning for Marshall, to open the first integrated law firm in North Carolina. Barbara was soon working alongside him and his wife, Vivian, stuffing envelopes and organizing fundraising dinners. Despite threats, his firm won historic cases, including the 1971 Supreme Court case Swann v. Charlotte-Mecklenburg Board of Education, which led to federally mandated busing.
During the 1960s, integration in Charlotte schools took hold. In 1965 Barbara was one of five black teachers transferred to all-white West Mecklenburg High School. The fiercely independent educator took the assignment in stride. "If I had been listening to people," she told me, "I would have been afraid to even drive down the road." She strikes me as someone who has known and followed her own mind throughout her life. That year Chambers's car was dynamited and his house firebombed. This did not deter Barbara; she began teaching in the white school. Several years later she was asked to hold workshops for students to explain cultural differences. Perhaps education could bridge the great divide. "I talked about the use of certain words," she explained, "to say ‘young man,' not ‘boy,' ‘young lady,' not ‘girl.' Those words are racial to black people." She helped organize the city's first senior class breakfast, where parents of both races joined their teenagers for a meal. "This was a way to bring parents in to see each other and meet each other," she said. The idea spread to other schools.

It's difficult to grasp, in 2009, how radical this was. In high school, Barbara and her friends laughed about the "Whites Only" water fountain at the S. H. Kress & Co. store at Trade and Tryon streets in downtown Charlotte. "I wonder what that ‘white' water tastes like?" they joked. Not only had she ridden at the back of the bus, she had seen African Americans stand up to give seats to whites. "A black person could not sit beside a white person," she recalled. "If two seats were together, and one was empty, and a white person wanted to sit down, the black person had to get up. You had to get up and release your seat," she said. The thought of this woman—this proud woman—ever being subjected to such treatment left me deeply troubled.

Lenora, like Barbara, grew up in the South during the 1930s and 1940s. Her family farmed. They owned a couple hundred acres (unusual for the time) outside of Shreveport, Louisiana. Both of her parents were born in 1906. For generations her family had enjoyed independence and financial stability — on her great-grandfather's birth certificate in the county courthouse are stamped the words "Free Man." Yet she and her siblings — there were nine children — walked to a one-room schoolhouse on an unpaved road while white children rode by in a bus to a better school. "We had to get in a ditch when the bus passed by," she recalls. If the white children spotted them, they would make faces from the windows. "If it was raining, the bus driver would purposely drive in the water and splash us." She skipped a grade, went to college, and became a teacher. She and most of her siblings moved to Southern California for better opportunities. Her grown daughter, a UCLA grad who works for the city of Charlotte, is the reason Lenora and her husband, both retired, moved here five years ago.
At our table in the writing lab I asked Lenora what Obama's victory meant to African Americans. She first pointed out that many never thought it possible. My disbelief was evident. Obama looked like a winner from the start. "No, even Mel Watt wouldn't back Obama in the beginning. He didn't believe a black man could win," Lenora said. For her generation, a black president of the United States was too good to be true. Watt, sixty-three, is in his seventeenth year as a congressman from the Twelfth District, which includes parts of Charlotte. He earned his law degree from Yale and has served as chairman of the Congressional Black Caucus. If anyone knows what it's like to be a black man in politics, he should. "No one believed it," Lenora said, exposing a hardness that comes from repeated setbacks. "But I knew it. He was my man from the beginning. I believed he would win. The way opened up for him."

We talked about the differences that remain between the races. Apologies from whites who oppressed blacks in past decades are fixing some of the fractures, but healing may not be complete until the civil rights generation has passed. "So many of us have died," Barbara told me. Both women see Obama's victory as a powerful message to a new generation. "Obama has lifted the conscience of the country," Lenora said. We talked about the difficulties each side has in listening to the other. Blacks have so much to say, "so much in us that we want to get out," that emotions often escalate, Lenora said. Then, "whites clam up and that just kills the whole dialogue," she said. She smiled and looked straight through me; the implication was unsettling.

Hearing all of this, I felt a little hopeless, yet I also felt something beginning to shift. I knew my fears of talking about race. Afraid I would say something stupid, of making some mistake that would brand me, I avoided the subject. Although I have had black friends, I have been afraid all my life to have a conversation like the one I had this day, with these two women. Yet Obama had changed something, something significant and fundamental between us. We had the courage to speak openly, and the faith to listen. Maybe that was what this victory would do for our country: open doors that were closed a long time ago. "It's like a gate has been opened," Lenora observed. And we were walking through it.

I went back to my question, the one I most wanted answered. "So how is this going to get any better?" The future looked so uncertain: the wounds of the past too big, the misunderstandings of the present too daunting.

"By this," Lenora said, firmly placing her hand upon the table, like a gavel falling in a courtroom. "By doing what we're doing."

This article appears in the April 2009 issue of Charlotte magazine.
Contest of the Month