An Eastover Couple’s Backyard Becomes a House of Its Own

WANDER THE BRICK AND STONE WALKWAYS that meander through the backyard garden of John and Judy Alexander’s Eastover home, and it’s hard to imagine the space’s former life as a tree- and shade-covered expanse of grass.

The house is John’s childhood home, which the couple purchased from John’s father in 1989 and moved into five years later. “We were enjoying living in Greenwich, Connecticut,” Judy says, “but we decided we wanted to raise our daughter back in the South. John’s dad loved this place and was so happy we moved here.”

John had the original vision of what the garden could be. He saw the yard broken into “rooms,” each with its own unique design and combination of flowers, plants, and trees. He also wanted several patios and an outside dining area that could seat a large group. Now, there are two patios with seating in the backyard and another brick patio with seating on the side of the house. The social couple loves to entertain and hosts several large gatherings every year.

The Alexanders began working on the garden in earnest more than 15 years ago, designing the spaces, adding plants, and installing hardscapes. They constructed a red brick privacy wall along the street side of the home, which sits on a corner. They also added some wrought iron fencing to break up the visually heavy brick and give the yard additional light. 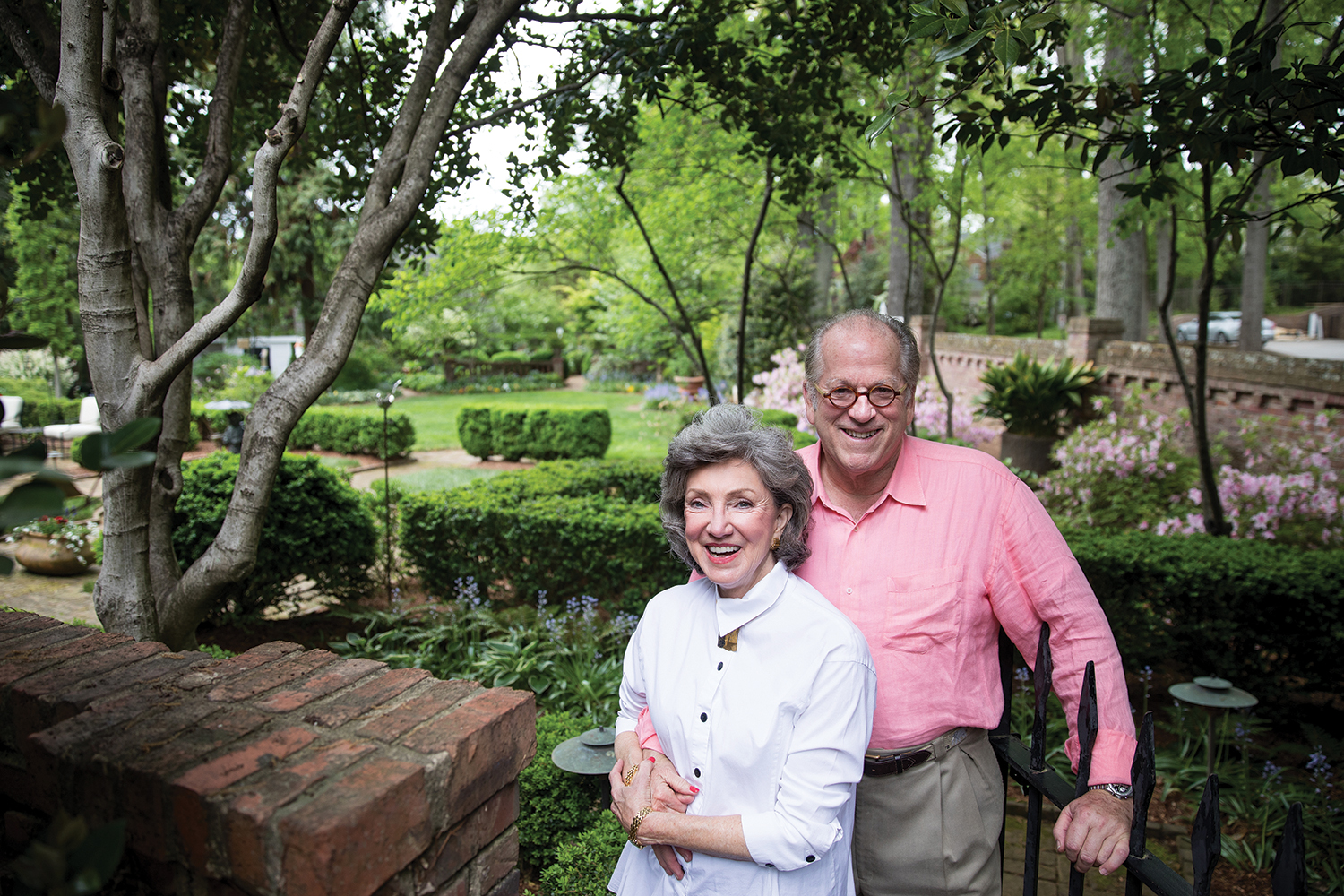 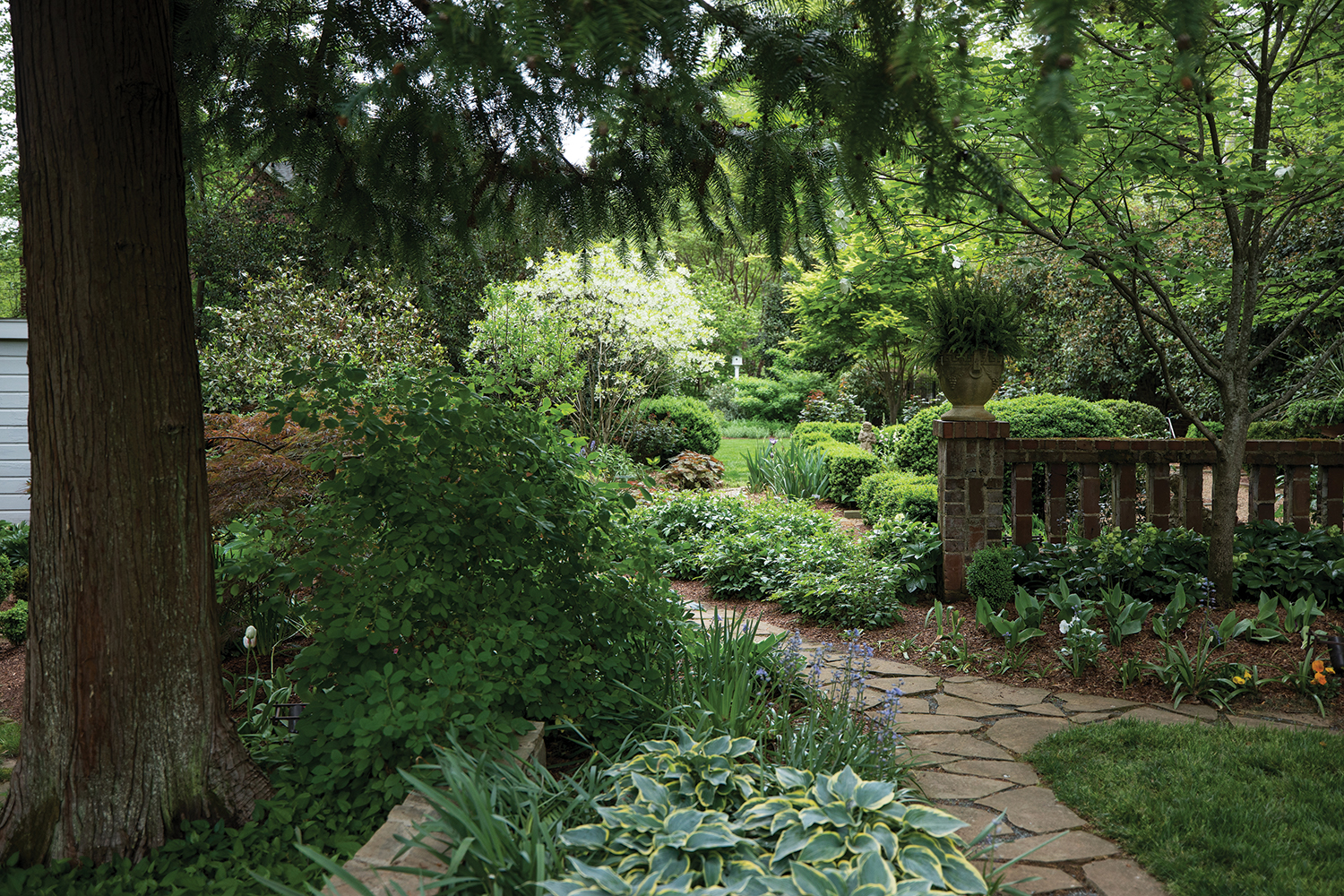 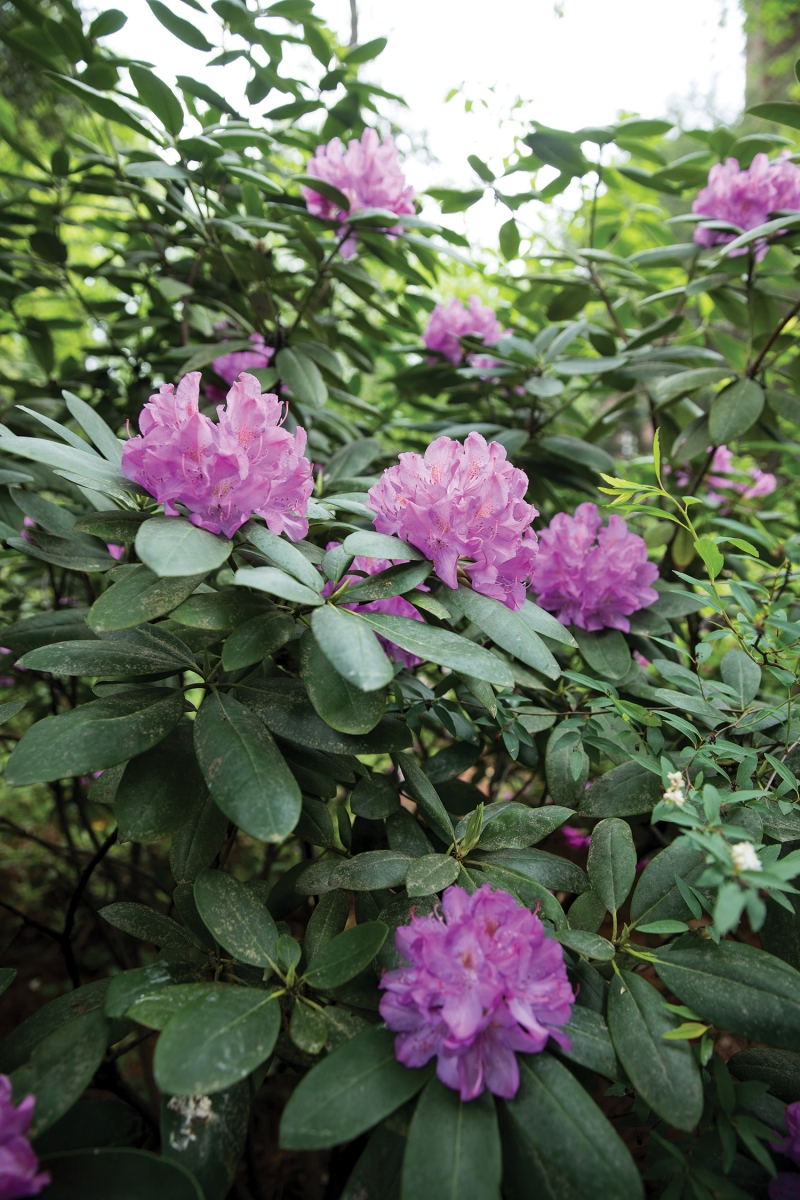 Judy and John Alexander (top) purchased the home from John’s father in 1989. They moved in five years later. (Middle) In the foreground, a large China fir tree provides shade as it cascades over the garden. Beyond that, a small American fringe tree brightens the path with delicate white flowers. (Bottom) Rhododendron bloom in the ‘back 40’ of the garden.

Whimsy and charm are abundant throughout the garden, which is adorned with birdhouses, benches, statues, and sculptures along with a small, practical garden shed. An enchanting water fountain statue of a young girl holding an umbrella over her head is a focal point of the parterre adjacent to the main patio. A sculptor from Greensboro designed the bronze fountain, based on a childhood photo of the Alexanders’ now-grown daughter, Alden. It’s one of Judy’s favorite spots in the garden to pull up a chair. 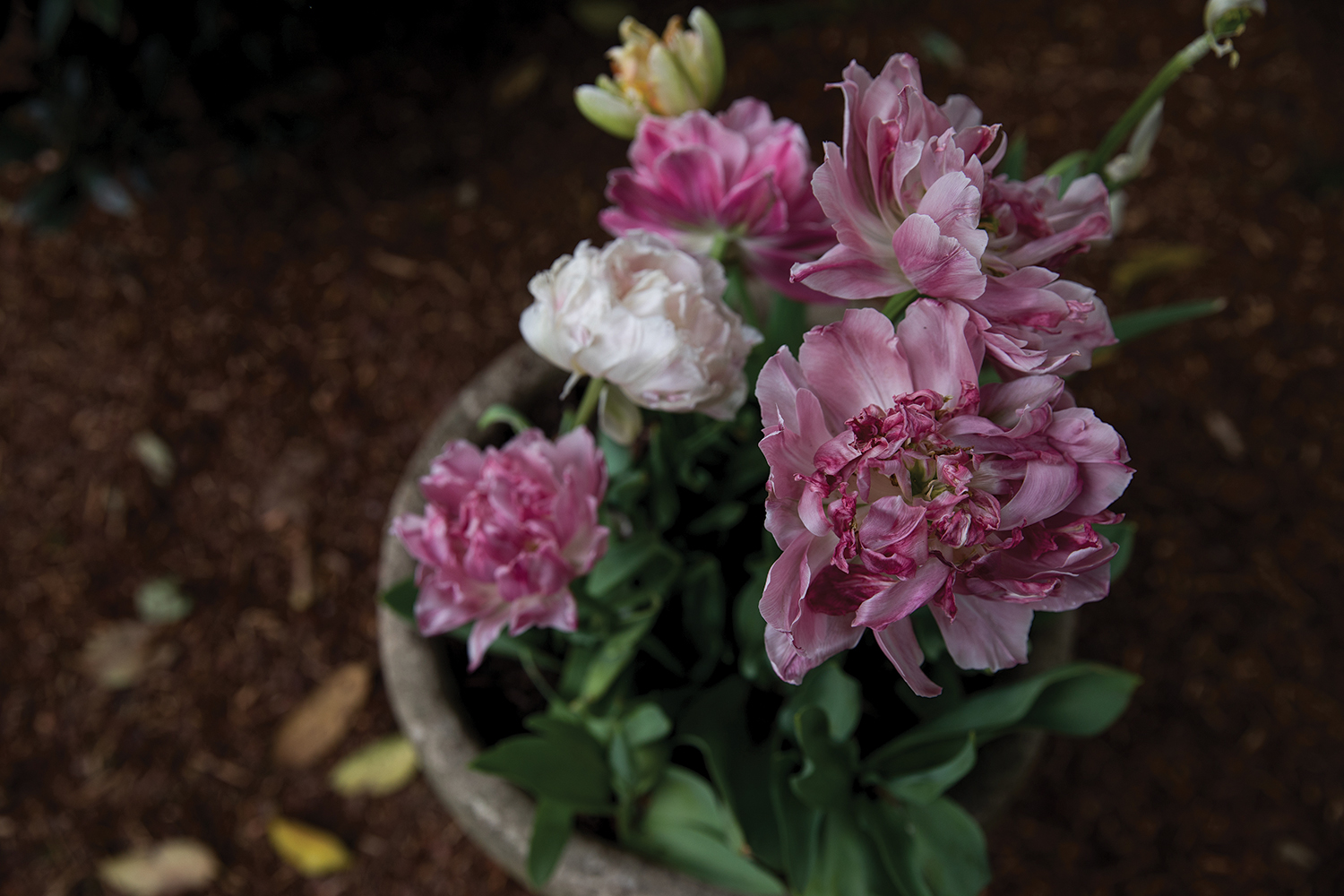 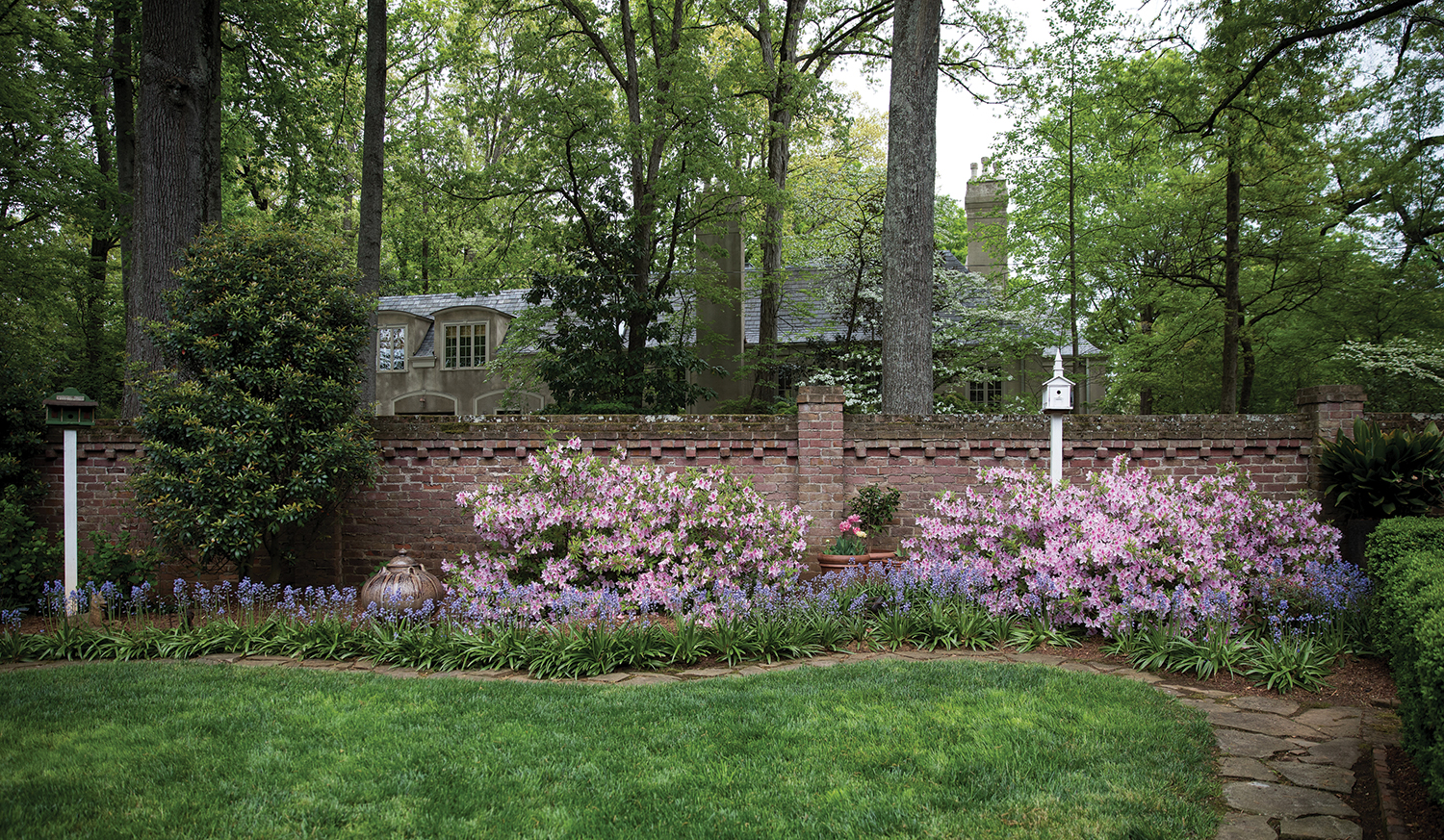 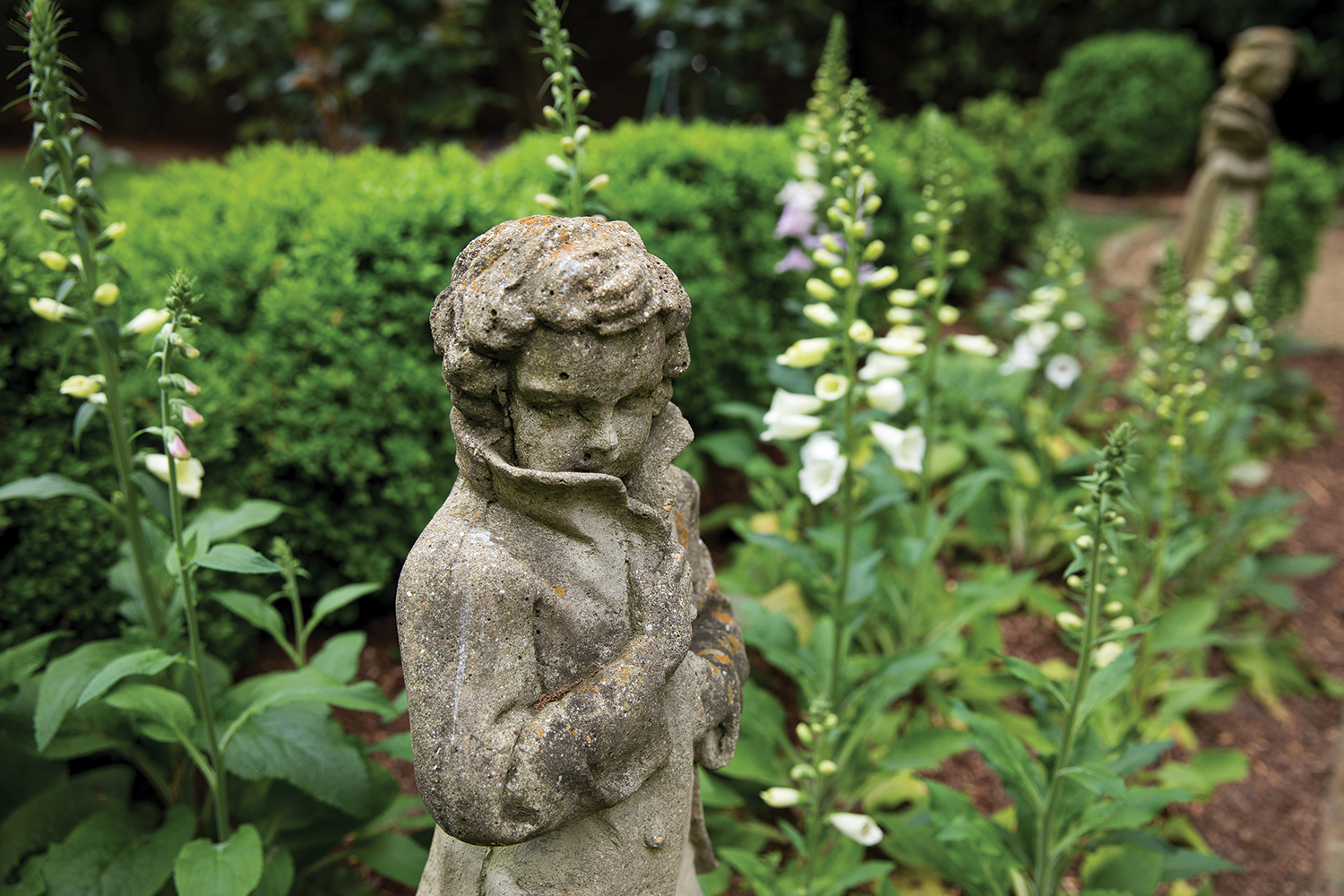 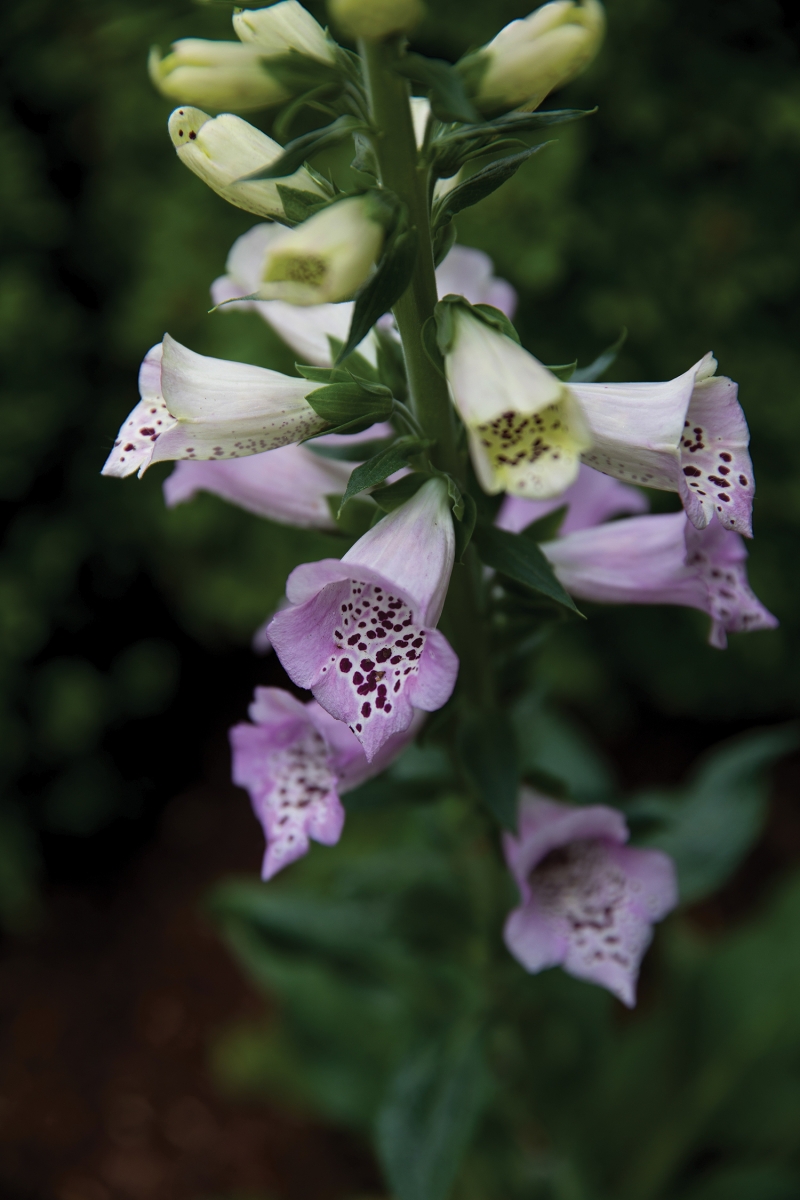 (Top) The last of spring tulips linger among pots and paths. The birdhouse surrounded by George Tabor azaleas is a replica of a church in Greenwich, Connecticut, where the Alexanders previously lived. (Bottom) Foxgloves (below and left) grow among statues throughout the yard.

In spring and summer, the garden is an explosion of color. Purple irises, larkspur, and foxgloves; George Tabor light pink azaleas; white viburnum; pink ranunculus; yellow daffodils; white lily of the valley; and a rainbow of tulips delight the eye. Metal plant markers help to identify and organize plants. An abundance of bluebells snakes along a stone path close to the brick wall. “Bluebells are beautiful, but they proliferate easily,” Judy says, “so I’m constantly digging them up and moving them.”

A showy edgeworthia anchors the grassy area at the farthest end of the yard, and dogwoods are scattered throughout both the back and front yards. Judy prefers the pale flowers of the kousa dogwood, which are planted in the front yard, because she feels it adds balance to the many brilliant flowers that catch the eye throughout their garden. The front yard garden also contains one of the couple’s favorite plants: a cascading wisteria. “It’s really fun when it blooms, and people have actually stopped by to comment on it,” she says. 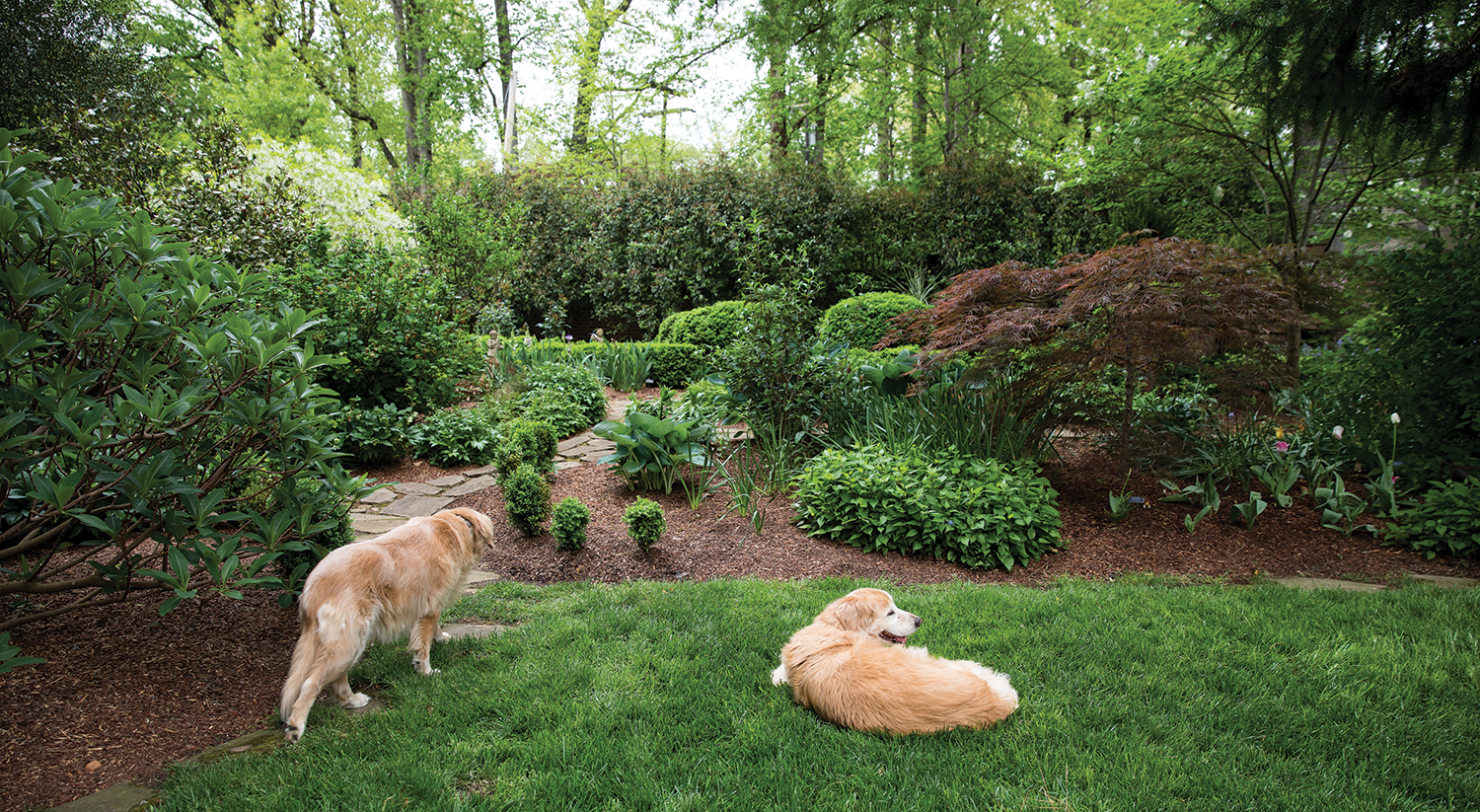 The couple’s golden retrievers, Wilson, 12, and Charlie, 13. (Above) A dappled willow tree grows near a rustic bench.

Maintaining the garden is work, of course, and does come at a price. “My husband blanches at our water bill,” Judy says, “but we need many zones of irrigation to help the plants to thrive.” Digging in the garden is wonderfully refreshing and exhausting, says Judy, and over time, they’ve learned which types of plants thrive and which don’t. 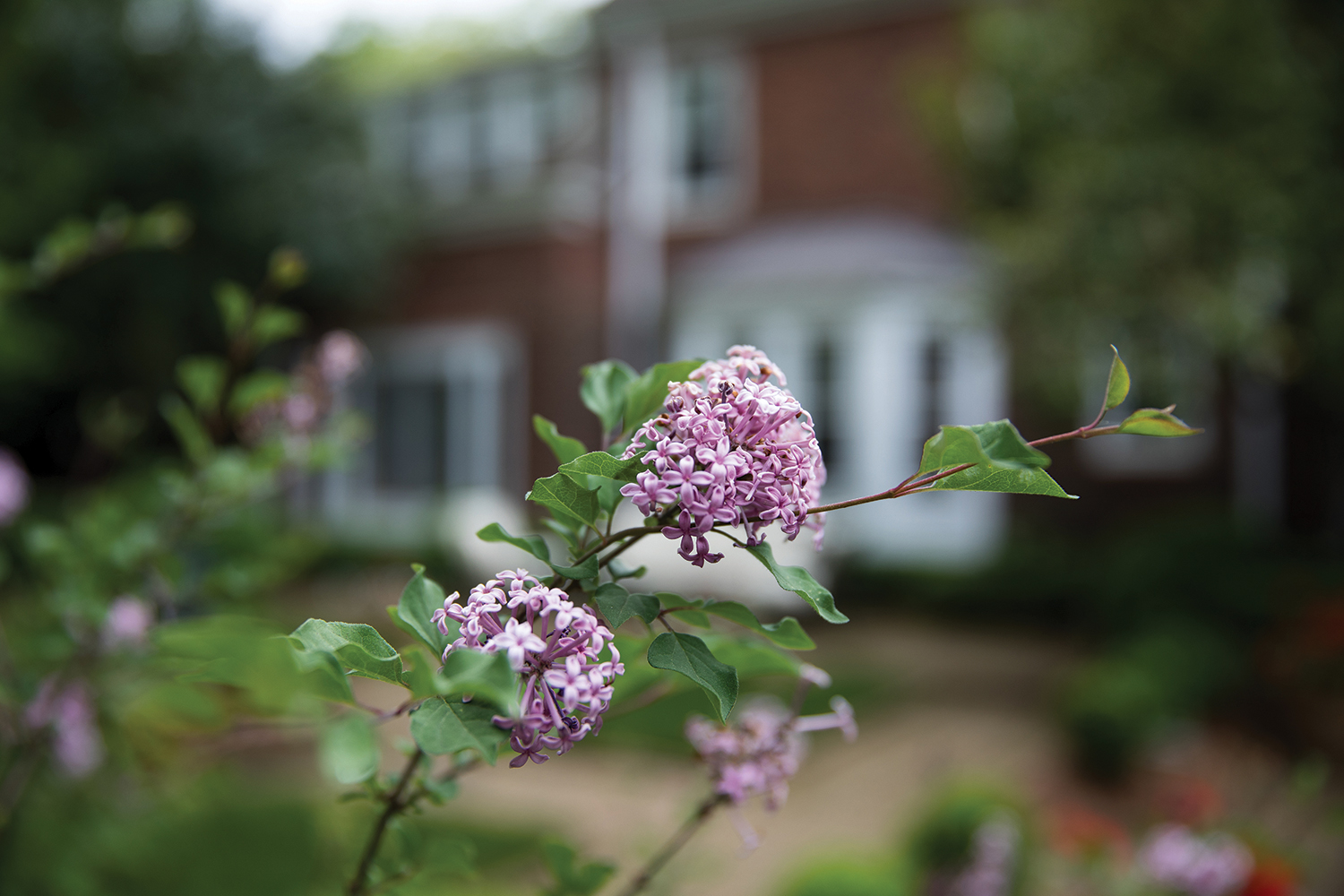 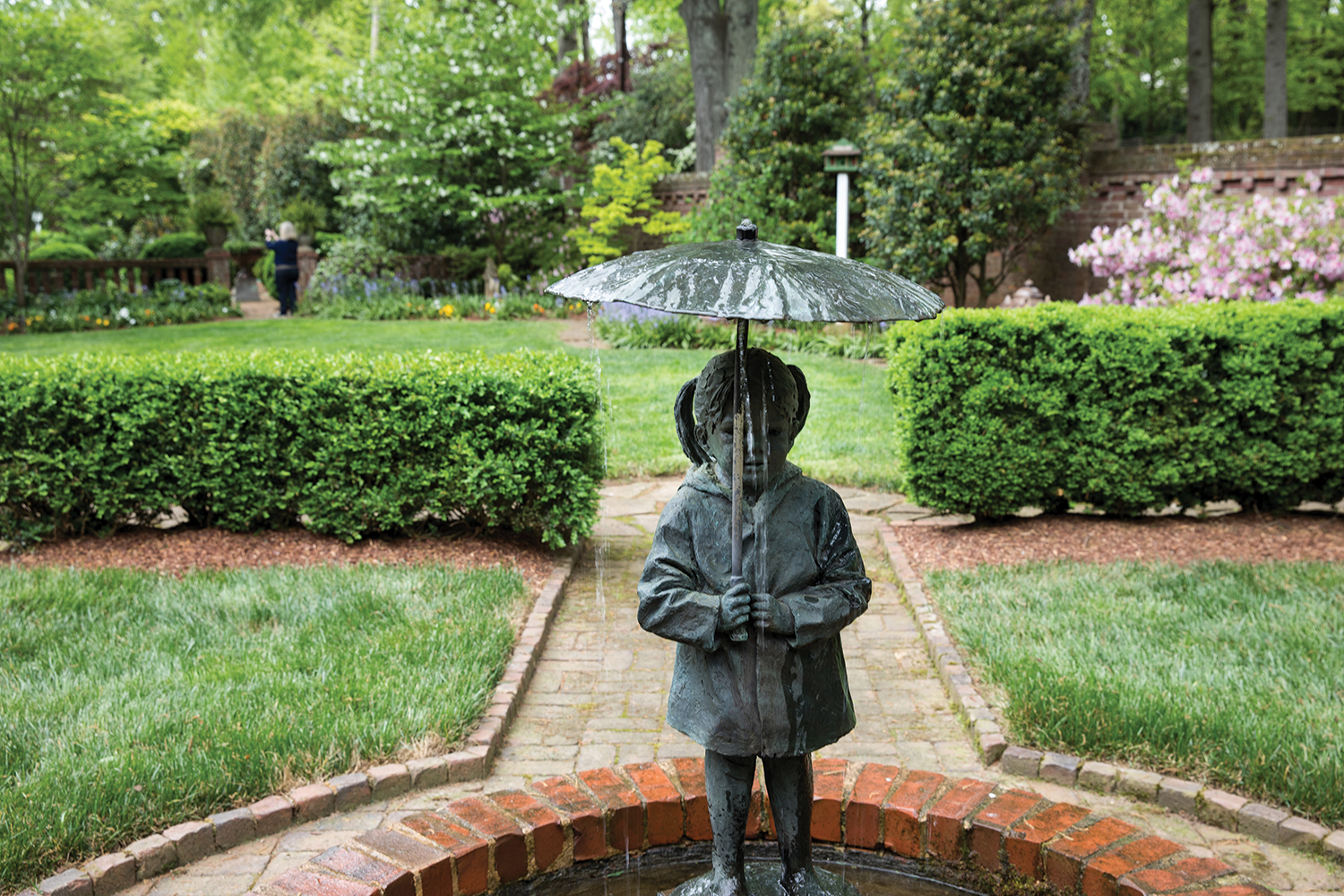 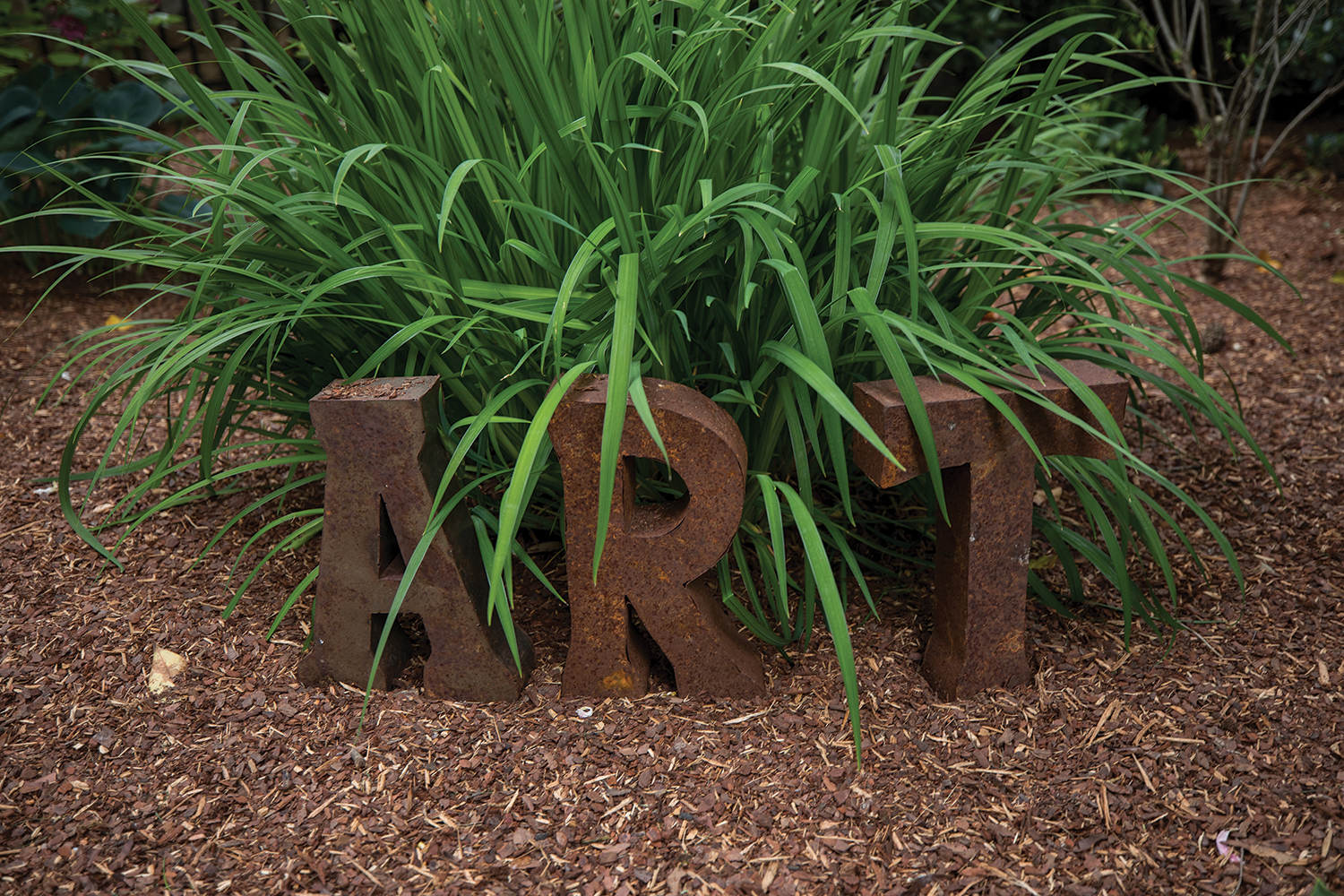 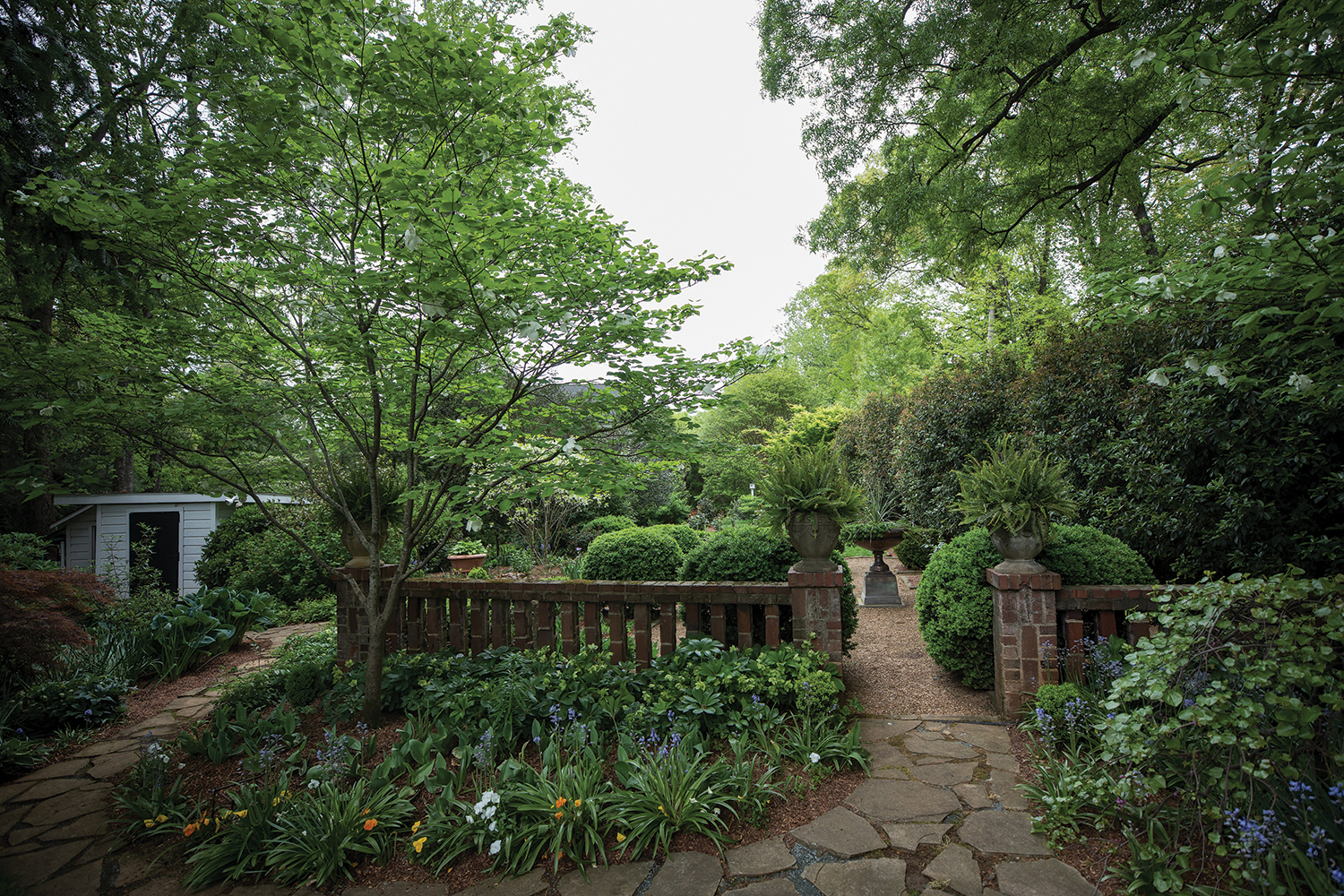 (Top to third photo) Lilac grows along the pathway; a bronze fountain was sculpted in the likeness of Judy and John’s daughter, Alden; whimsical details are displayed throughout the garden. (Above) The formal garden beyond the brick fence contains peonies, foxgloves, boxwoods, and various plants and blooms.

When things do work, the couple makes sure to pause and enjoy what they’ve created. “I love going, at the end of a long day at the office, to the ‘back 40,’ sitting in the swing with a nice glass of wine, and unwinding,” John says of his reimagined childhood backyard. “I think it’s the most peaceful spot in our garden.” 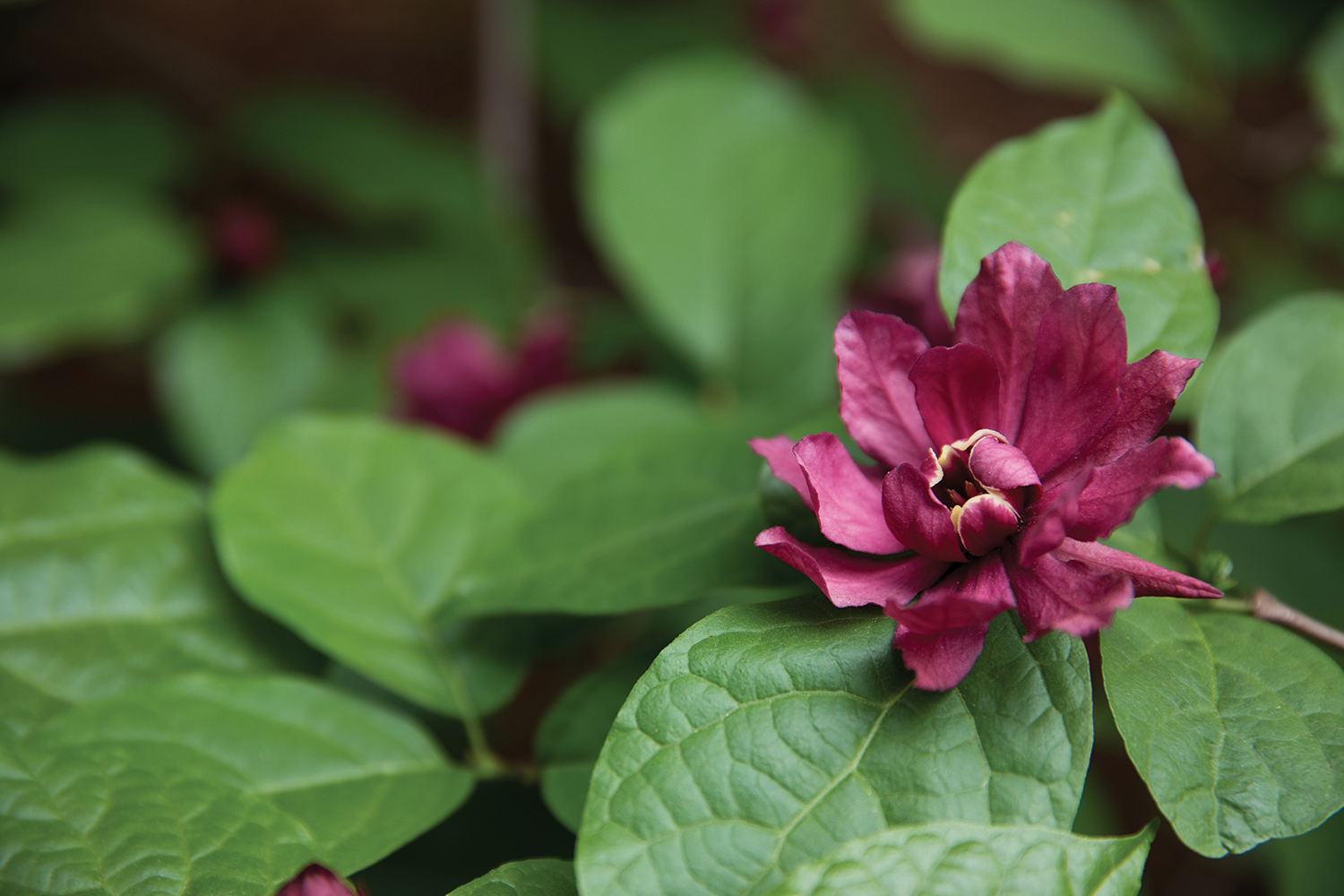 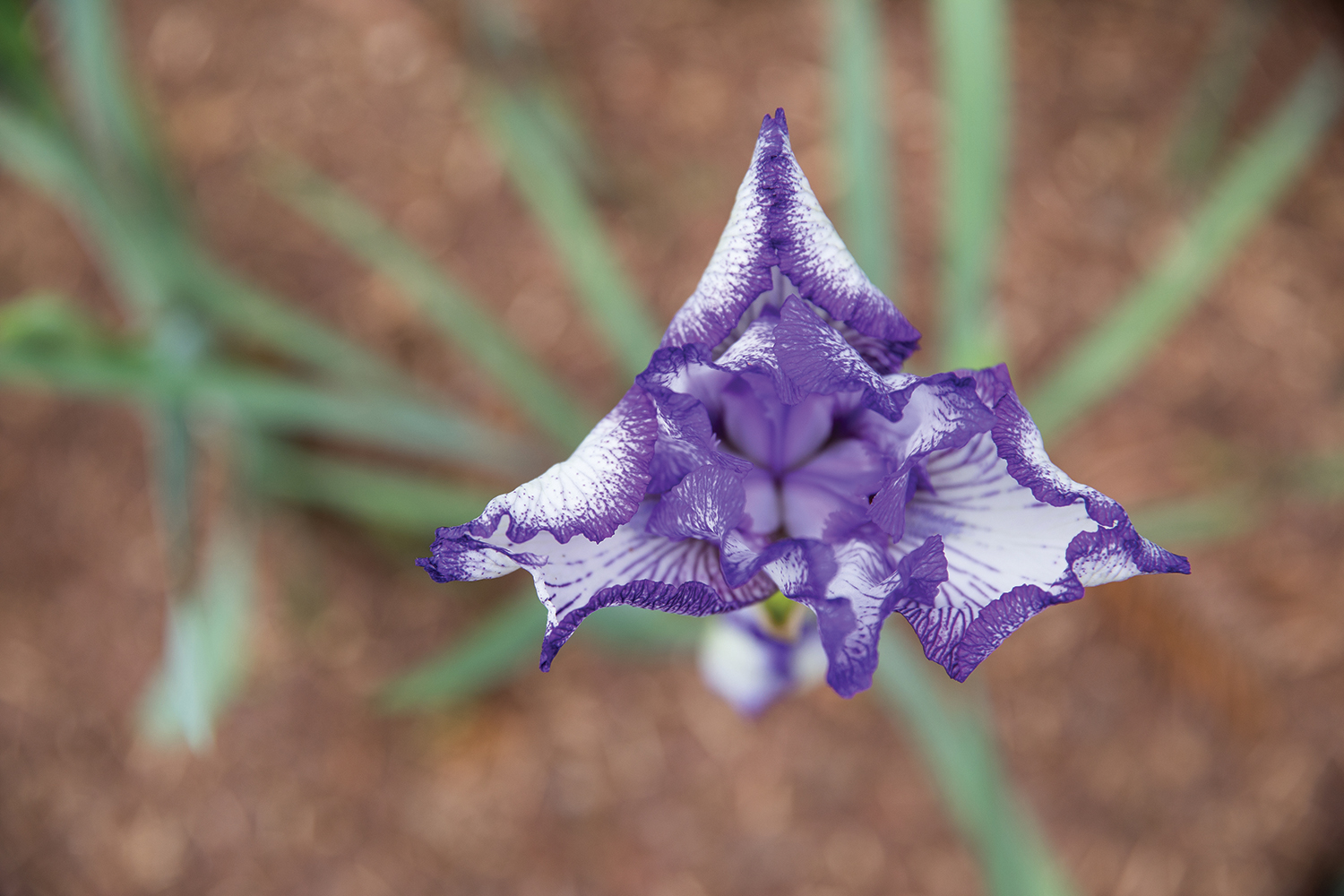 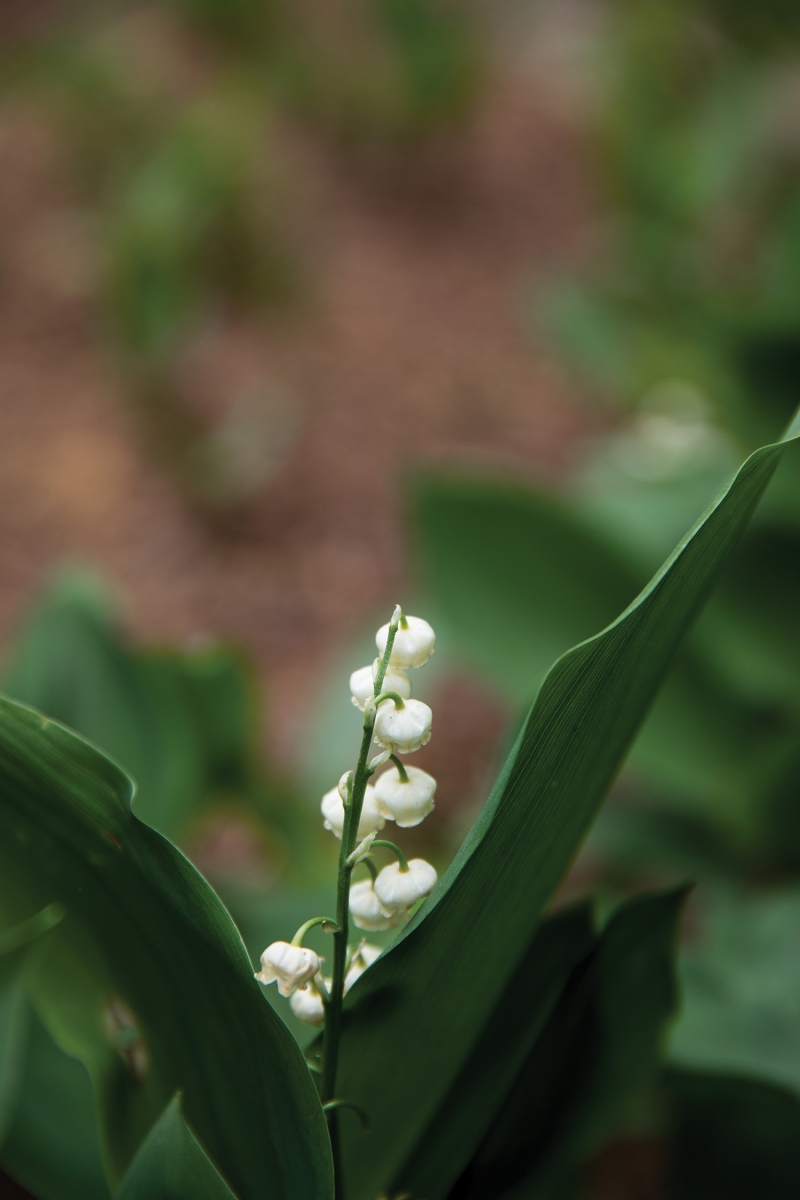 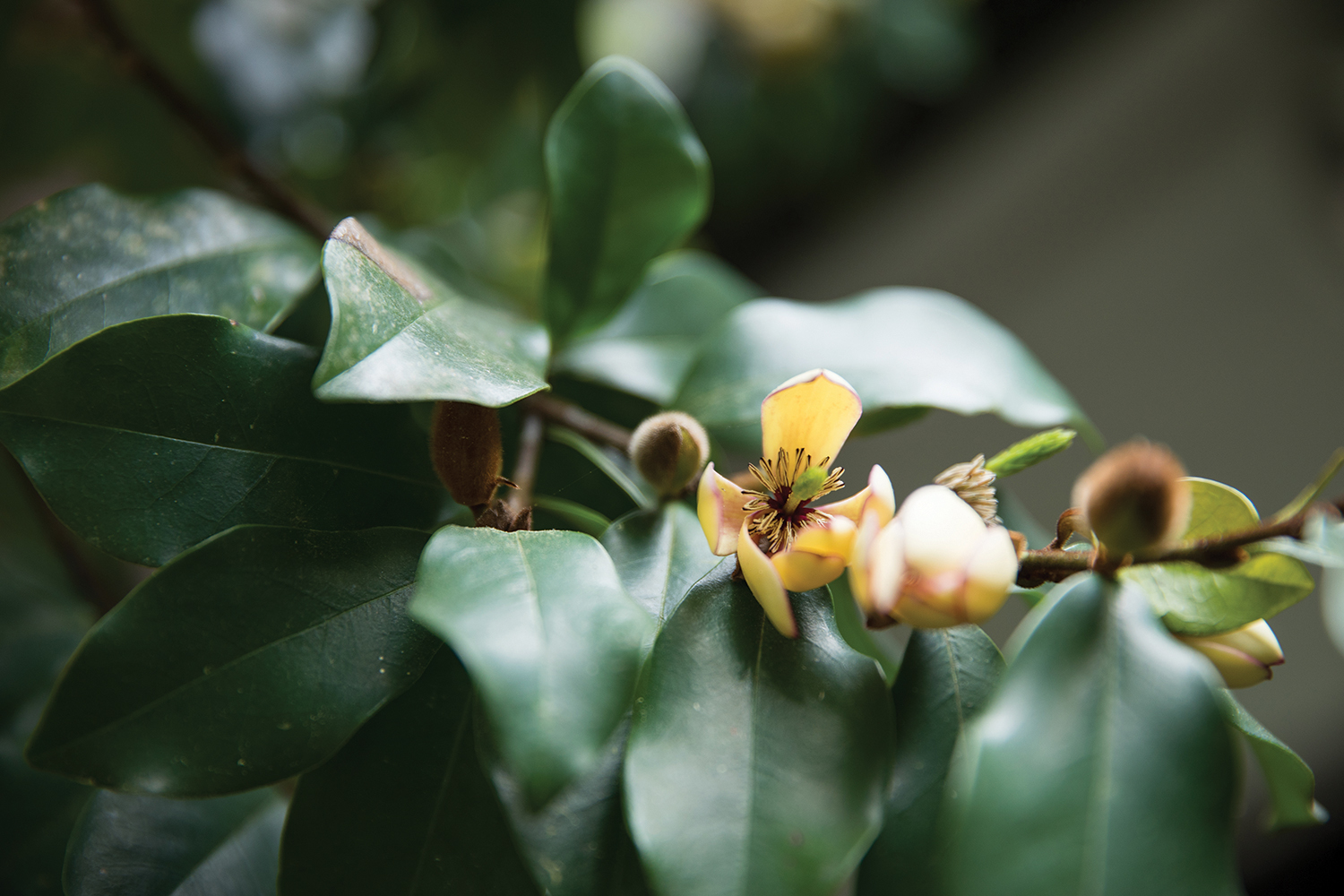 (Top photos) Calycanthus, purple bearded irises, lily of the valley, and other colorful blooms catch the eye in each garden room. (Above) Waxy blooms from the banana shrub produce a fragrance that smells like bananas.

This article appears in the June 2018 issue of Home + Garden.
Categories: Feature
Contest of the Month