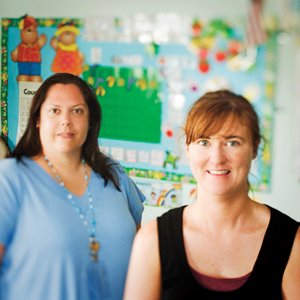 Colleen Jenny and Theresa Wagner use Applied Behavorial Analysis, a system of repetition and rewards, to help combat autism.

In other words, autism manifests itself in a variety of ways, and no two people on the autism spectrum will have precisely the same set of symptoms. But there are certain cardinal signs of the disorder, says pediatrician Joseph Stegman, founder of Developmental & Behavioral Pediatrics of the Carolinas in Concord.

Chief among them are lagging socialization skills. A baby with autism might not respond to his name, make strong eye contact or show shared interest in an object or activity—known as "joint attention."

Delays or regression in language skills are also common in autistic children, and restrictive, repetitive behaviors—such as rocking or hand flapping—are often seen.

Even with increasing awareness of the symptoms, Stegman says he hears of too many cases in which parents concerned about autism were put off by a well-meaning pediatrician, and lost valuable time during which their child could have started treatment.

"It's very hard to tell a parent that there is something wrong with their child, so some doctors take a wait-and-see approach longer than they should," says Stegman.

It can take months to get an appointment with a specialist qualified to diagnose autism, and Stegman says parents shouldn't hesitate to ask their child's pediatrician for a referral to a speech or occupational therapist, who can start working with a child even before he or she gets an official autism diagnosis.

For more information, check out the Autism Society of America's "Autism 101" online course, at www.autism-society.org.

Cure Autism Now. Those are two popular rallying cries in the fight against the developmental disability that has more than 1.7 million people in its grip. One Charlotte school is attempting to add another verb to the growing autism lexicon: Garr. As in Garr Autism Now. As in Garr Christian Academy, an east Charlotte private school where about thirty autistic children are being educated amongst the school's 250 or so typically developing preschool through eighth grade students. Through a system called Applied Behavioral Analysis, teachers use repetition and rewards to teach desired behavior. "We're teaching them that their language will get them what they want, what they need," says Garr ABA director Theresa Wagner.

ABA is highly regarded as a method for teaching kids with autism, but it is tremendously costly. In Garr's four classrooms, there is one co-teacher for every two students, as well as one lead teacher for the whole class.

ABA generally isn't offered in its purest form in public schools, though ABA principles are often used in public school special education programs. Wagner, who started the Garr ABA program four years ago along with program consultant Wyndie Stitt, says it has a waiting list of about thirty-five children whose families are willing to pay tuition and fees of about $20,000 a year, which is supplemented by the school's extensive fundraising efforts. Wagner says families have moved here from other states so their children could learn at Garr.

Autism is a complex neurobiological disorder that impairs a person's ability to communicate with and relate to others, according to Autism Speaks, a group that supports autism research and advocacy. A person diagnosed with autism is said to be somewhere on the autism spectrum, from mild to severe.

Since the 1990s, the number of autism cases has skyrocketed from one in every 5,000 children to one in every 150 children. It's unclear how much of that jump is attributable to increased awareness and diagnosis of autism, but there's a slew of alarming autism statistics to share:

In the Charlotte-Mecklenburg school system, one in seventy-three children are currently diagnosed with autism spectrum disorder.

It is estimated that as many as 30,000 people in North Carolina are living with autism spectrum disorder. In the U.S., more than 500,000 people under the age of twenty-one have autism.

Researchers have found no statistical link between autism and socioeconomic status, race or ethnicity, but there does appear to be a gender component. Boys are four times as likely as girls to be diagnosed with autism.