After twenty-five years, dinner theater has returned to Pineville, proving that there’s always room for the classics—and a good sex farce

Simon comedy hits, or even dramas like Cat on a Hot Tin Roof. 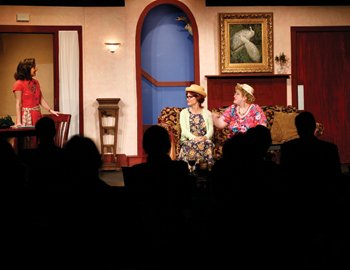 The Pineville Dinner Theater performs a wide selection of plays, which span the dramatic to the comical, such as A Bad Year For Tomatoes. (Mike Hammer)

Or they remember the stars. TV and Broadway cowboy Robert Horton. Two-time Oscar winner Jessica Lange.
For many, such fond memories of the original Pineville Dinner Theater are still vivid and prevalent twenty-five years after the final curtain closed in the early 1980s. Remarkably, after a quarter-century intermission, there's a new home for Act 2. In an unlikely location and unlikely era—and not without a collection of setbacks worthy of its own script—Pineville Dinner Theater is cranking out memories for a new generation.

Three aging hams sparked the revival—theater producer operations director Jeff Pillars, owner/president Jim "Spanky" Sprowles, and resident stage director Craig Spradley. Only Spradley, the last to join the team, had ever experienced the original, long before the Pineville development boom, when the barnlike structure of the old dinner theater looked appropriate in its rural surroundings.
Spradley dropped out of school for a semester in 1972, when he was a theater major at UNC-Greensboro, to be in his first Pineville show. Back then, the south Charlotte dinner theater was part of a chain, affiliated with the Barn Dinner Theaters in Greensboro, Tampa, and Marietta.

"So if you got in a show, then you toured and did five weeks in each one of those places," Spradley says. "That was a pretty big deal for a college kid, the second gig I ever got that I was really paid for as an actor. After that, I did a number of things for the Barn Theater in Greensboro over the years."

Spradley had heard talk about bringing back dinner theater to Charlotte, but nothing concrete until Pillars called and offered him a job. During his roving days, Spradley had notched dinner theater gigs in Oklahoma, Tennessee, and across the Midwest. By the time Pillars came knocking, Spradley had long since settled here. He's an established mainstay at Actor's Theatre, where he has cut up onstage in A Polish Joke and directed two noteworthy musicals, Johnny Guitar and tick, tick…BOOM!

Meanwhile, Pillars had allowed a thick layer of dust to settle on his local theater credentials. He last appeared onstage in Charlotte Rep's 1993 production of Breaking Legs. Flying jubilantly in the face of theater professionalism, Pillars made a holy crusade every night out of breaking up his co-star, the venerable Terry Loughlin—with uproarious success.

These days, Pillars's antics are syndicated. Beloved by morning radio addicts in more than 100 markets, Pillars plies his mischief on the John Boy & Billy Big Show, where he portrays Ike Turner, Karl Childers, and a slew of other misfits. Only ostensibly demented, Pillars also runs Earth Dog Entertainment out of Mineral Springs. For more than five years, he has been the voice of one of the Windex crows. Current projects include writing two new comedies with local playwright Judy Simpson Cook—exclusively for Pineville Dinner, of course—and collaborating in Los Angeles with producer Ken Badish, a co-conspirator with Pillars on the notorious Ernest movies.

Pillars developed his sweet tooth for dinner theater after the original Pineville operation shut down. A buddy prodded him into meeting with Barry Bell, longtime emcee of the Barn Dinner up in Greensboro. Initially, he had his misgivings. But the journey to Greensboro was like a religious conversion.

"It was like having an epiphany," he recalls. "I said, 'You mean to tell me I can take this long to respond to a line, and I can mug, and I can do breaking-wind bits, and I can do all this other stuff, and you encourage that?! Sign me up!' "
Pillars met Spradley during one of his bivouacs at the Barn Dinner. These included the show that launched the new Pineville enterprise,

Having a Wonderful Time, Wish You Were Her. While Pillars entertained wistful thoughts about how nice it would be to have a dinner theater here in Charlotte, he never really gave it a second thought.

"Until I met Spanky," says Pillars.

Sprowles was tight with John Boy and Billy, even traveling with them occasionally. More importantly, he was—in his own scruffy way—a charismatic restaurateur saddled with a lagging Coach's Sports Bar franchise. During football and basketball seasons, the joint way down Park Road was jumping and the bottled spirits flowed. But from April through September, the cavernous venue accumulated cobwebs.
So Pillars went to work on Sprowles with the same crusading zeal that had brought Loughlin to tears.

By Sprowles's count, it took three or four years before he was won over. "We would go to the Barn Dinner Theater up in Greensboro and made two or three visits up there," he says. "And I wasn't real impressed. The venue was nice, but the food was kind of average. But I looked around, and every time I went, they were full. I thought that pretty much speaks for itself."

After more research, he was sold on the dinner theater concept, but only if the theater side and the dinner side were done first class.
"My thought was to do something a little bit different," says Sprowles. "I wanted to serve food that was better than typical dinner theater fare. If we could literally create a five-star buffet where the food would carry its weight as much as the show, I thought we could put a new spin on it. By making it a comedy theater, with no hidden agendas, and a great place to eat, we had a great possibility of making that work."

An architect and interior designers helped transform the bar into a dinner theater. Large-screen TV monitors that previously beamed the Bobcats and Panthers were repositioned to show diners clips of the Three Stooges and Johnny Carson while they ate. Doors close on the buffet when the live entertainment begins at 8 p.m., with desserts and coffee served between Acts 1 and 2.
Sprowles hired Cliff Ottinger, who trained at the Culinary Institute of America, to run the kitchen. Ottinger's lobster-crusted grouper, beef medallions with blue cheese sauce, and smoked Gouda gratin potatoes are staples on the menu.

Pillars was floored by Sprowles's commitment to quality—and his willingness to invest.

Adding to the stress of bringing back a tastier Pineville Dinner, health issues cropped up at inopportune times. Sprowles's difficulties delayed the remodeling. Just before the press preview, one of the leading men was hospitalized with a stomach virus, forcing Spradley to cancel the performance. Between the first show, Having a Wonderful Time, and the second, My Husband's Wild Desires, Pillars's wife suffered a stroke, forcing him to take a leave of absence. And during the run of My Husband's Wild Desires, one of the actors, Brett Gentile, suffered a heart attack the morning of a performance.

He checked out of the hospital and appeared onstage that night, ready to execute all his high-energy physical comedy. Sprowles, who jazzes up audiences with a raunchy pre-show intro, couldn't conceal his amazement.

Yes, after that stumble during previews, the shows did go on. They've gone well, too. On the heels of Murder at the Howard Johnson's, featuring local favorite Jerry Colbert, A Bad Year for Tomatoes entered and exited in time for the holiday season. Pillars's wife is back to 100 percent, and Spradley is back on the radio, adding a rasping impersonation of Spanky Sprowles to his gallery of misfits on the John Boy & Billy Big Show.

Business has perked up at the Park Road location, and there's a newly arrived farce, Sorry, Wrong Chimney, in town for the holidays. Brace yourself for the notorious Santa Burglar and his gun-toting fiancée.

As the season of hope, innocence, miracles, and belief approaches, Sprowles is beginning to believe he might recoup his mammoth investment. Already he understands how much the old Pineville Dinner Theater has meant to locals from customers who approach him after shows at his new place. These are the patrons who recall getting engaged at the old barn, or whose parents told them about it. And it tickles Sprowles that once again, Pineville Dinner Theater is creating sweet, sentimental, and hilarious new memories while reviving old ones.

"Young kids getting engaged or getting married—or birthdays and anniversaries—are very quickly becoming a prevalent thing," Spanky says proudly of his new clientele. "What keeps me inspired is that we're going to be a regional destination. It's not going to be something that's just in south Charlotte. People from Asheville, or from Knoxville, or Columbia, or Greenville, or Raleigh, or Virginia will eventually see us as that place people go to when they come to Charlotte."

This article appears in the December 2007 issue of Charlotte magazine.
Categories: Buzz > Arts
Contest of the Month