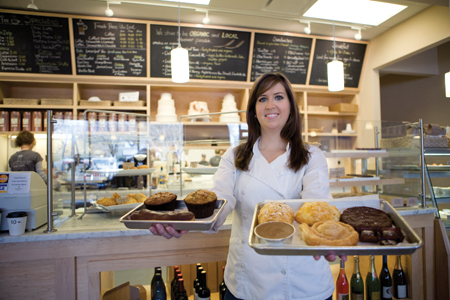 At twenty-five years old, Marion Buhrmaster has already landed her dream job. She’s the executive pastry chef at Sunflour Baking Company in Elizabeth, which she co-owns with her mom, Debbie Bartok, and sister, Johannah Saruse. Owning a bakery has been Buhrmaster’s dream since she stepped into her first class at Johnson & Wales University. Working with her mom and sister: icing on the cake.

Baking is primarily a solo effort, and although Sunflour’s menu has evolved since the bakery opened in October 2010, one thing has remained the same—it’s a reflection of Buhrmaster’s laid-back personality and fashion sense. From the flaky croissants that took months to perfect to the attractive pastries that line the cases, Buhrmaster has conjured them all. Some of the most popular items are house-made versions of childhood classics—Pop-Tarts, Oreos, Whoopie Pies, and a chocolate cupcake with a caramel filling inspired by Rolo candies. Many of her best ideas come when she least expects them, Buhrmaster says. And when they arrive, it’s hard to resist the temptation to try them out right away.

“Sometimes the middle of the night is the best time to try a new recipe,” she says. And she’s been hard at work coming up with additions to the menu—for the bakery’s sophomore year, look for a line of truffles, more elaborate desserts, and wine and beer pairings.

Just don’t expect to find Buhrmaster sampling her creations when she’s not at work. “I definitely don’t want sweets on my day off,” she says.

You don’t need a culinary degree to create beautiful desserts. Just sign up for one of these classes taught by local pros, tie on an apron, and learn how to whip up your favorite sugary treat in your own kitchen: 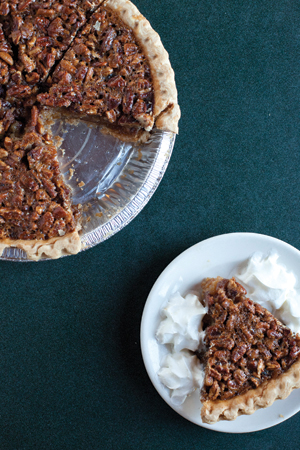 The Chef’s Choice program offers hands-on workshops with its professional instructors on select Saturdays. Dessert classes include Tiered Cake Creations, where you’ll learn how to make, stack, and decorate wedding cakes; Candy and Confections, which includes instruction on everything from fudge and truffles to marshmallows, caramels, and hard candies; and Frozen Delights, where you’ll learn to make ice cream, sorbet, sherbet, and popsicles. Classes vary and fill up quickly; check the website for registration dates. Workshops start at $125. 801 W. Trade St., 980-598-1085, jwu.edu/charlotte

This Elizabeth foodie boutique offers a varied roster of cooking workshops on site. Classes are posted three months at a time and fill up almost immediately; sign up for the shop’s email newsletter to be notified as soon as new classes are listed. Dessert-making workshops have included instruction in pastry dough and at-home versions of Girl Scout cookies. $65. 1707 E. Seventh St., 704-333-7300, cookinguptown.com

Cocoa Lab at the Ritz-Carlton

Intimate classes of up to eight people learn from the pros at the hotel’s Bar Cocoa; students get aprons to take home. Choose the Chocolate and Champagne Lovers Workshop to create a menu inspired by Bar Cocoa’s five-course all-dessert dinners, or opt for the Macarons and Whoopie Pies class to try your hand at creating treats like red velvet macarons and banana peanut butter whoopie pies. $75. 201 E. Trade St., 704-547-2244, ritzcarlton.com/en/Properties/Charlotte/Dining/Bar_Cocoa —A. A.

For Jonathan and Ashlee Day of The King’s Bakery, every dessert is a collaboration 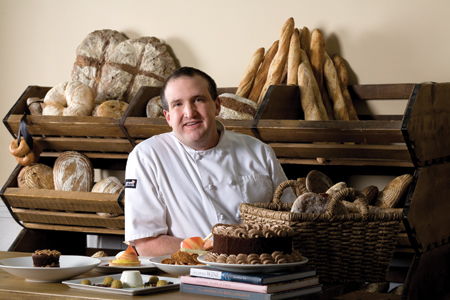 If you happen to be uptown in the wee hours of the morning, you might spot Jonathan and Ashlee Day walking to work together. Their destination, The King’s Bakery, is on Queen Street, just around the corner from The King’s Kitchen—and one of the newest ventures from restaurateur Jim Noble. Scheduled to open early this year, the humble little space with high ceilings and a rustic, European-inspired look is where all the breads and desserts for Noble’s four restaurants are prepared. It offers cakes to order, plus breads, pastries, and desserts. And the Days are the culinary forces behind all that baking.

The pair met while working in the kitchen at the now-closed Noble’s Restaurant in SouthPark, and when they got married five years ago, Noble was one of the groomsmen. After leaving Charlotte for a while to pursue new training, the couple is happy to be back in North Carolina—and back at Noble’s. Jonathan is the restaurant group’s executive pastry chef and managing partner; Ashlee is assistant pastry chef. For them, every dessert is a collaboration.

They’re most proud of the coconut cake on the menu at Rooster’s. With Chantilly cream and crème anglaise, plus a sour cream coconut filling, it’s a long-standing favorite, one that took them six months to perfect. “Our approach to desserts is simple and straightforward,” says Jonathan. “It should be fun to eat,” adds Ashlee.

And, Jonathan says, knowing that their work supports the mission of the King’s Kitchen, which feeds, trains, and employs disadvantaged people, makes the long days and early wake-ups even more worthwhile. —A. A.