‘Because I’m Through Being Cool’: Fatherhood and Saves the Day

Saves the Day is coming to Charlotte tonight, marking the 15th anniversary of my favorite record, Through Being Cool.

Never heard of it? OK, here’s an experiment. Next time you’re eating out somewhere, find a table of folks in their late ’20s. Ask them if they’ve ever heard of it. 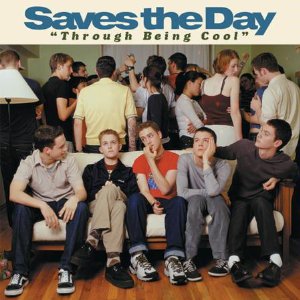 Watch slow smiles form. Some will give that Richard Gere chuckle and peer off into the distance. The word “nostalgic” will make it into the conversation. For many, mentioning the 1999 emo classic conjures images of high school hallways and prolonged break-ups. It’s the diary that was already written for you, from a time when phrases like “rockin’ out” were used earnestly and you had a Hotmail account.

But for me, Through Being Cool isn’t a high school record. I carried it through adulthood. I listened to it on the first walk through my college campus. It never left our road trip roster of albums. A few of the songs were even on my wedding day playlist.

And the most vivid memories of Through Being Cool revolve around the year 2014.

HER WATER BROKE at midnight.

That’s not how we thought it’d happen; I thought waters only broke in ’90s movies. But I wasn’t Hugh Grant; I was a disheveled, 28-year-old man who had already put on his Superman pajamas. As we walked the house, making last-minute preparations before the drive to the hospital, my nerves rose. And then, my wife said something wonderful: “Put a record on.”

I flipped through the choices. Alt-country, folk rock, soft post-rock, hard post-rock—all fine options for easing tension. But there’s one record that’s always done it. I slid Through Being Cool out of the white paper and placed it on the player. As the power chords of “All-Star Me” swelled, and singer Chris Conley shouted, “This isn’t the way we planned… ,“  I felt relief.

Ten months before that night, I purchased this copy of Through Being Cool on eBay. At the time, you could only buy one of the original pressings. It was more money than I’d ever thought I’d spend on a record. But this was Through Being Cool, that seminal emo LP.

I stalked an eBay listing for a week before making my move. “This is the kind of thing you could only buy when you don’t have kids,” I joked, placing my bid with seconds to spare. As we finished packing for the hospital several months later, the joke was funnier.

THE RIDE ON BUS 11 had a duration of 120 minutes, from my house on the ridge to the front steps of Magnolia High School. As the vessel snaked through the West Virginia hills, the monotony required a soundtrack. And if there was one artifact that defined that period, it was a CD-R with Sharpie scribbles across the bottom. CD burners opened the floodgates of record-sharing and mixes for my generation.

“STD – TBC,” one disc read. I don’t remember who gave it to me. This album, and a hundred others, served as bookends to the daily grind of high school. An hour-and-a-half of guys singing about heartbreak, strained friendships, and the need to escape it all filled my morning and the afternoon ride toward home.

I read this, and I think about what the 3-hour block of emo and pop-punk did to my brain. Like all of my friends, I matured into new tastes as I entered college and adulthood. Writing about music for a living helped.

But those albums stayed with me.

AT 3 A.M., Elliot was crying out for anyone to hang out with her. Conversations with day-old human beings are short, so I needed something to occupy my mind as I paced the hospital room with her.

The shuffle hit that one album on my phone. I thought about high school. I thought about college, and dating, and getting married. I thought about the night Sara’s water broke. The next time I listen to Through Being Cool, I’ll probably think about that late-night walk around our hospital room. That’s why I don’t use the word “nostalgic” when I talk about this record. The word implies fixed, sometimes wistful memories, not a revolving door of backdrops, moments, and emotions.

Tonight is more than a party for Through Being Cool’s 15th birthday. It’s a celebration of everything that happened in-between, and the life it’ll continue to have on my record player.