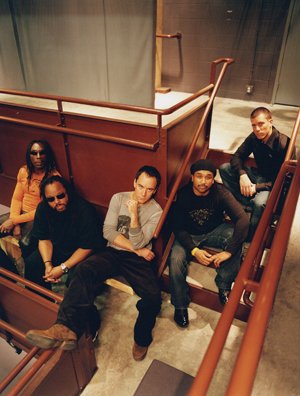 About two weeks before hitting the stage in Charlotte, the Dave Matthews Band will perform at “A Concert for Virginia Tech.”

Band in the USA

Singer, songwriter, actor, and, most recently, an advocate for U.S. soldiers returning from Iraq, Dave Matthews comes to town for an evening under the stars with the force that made him famous, the Dave Matthews Band. A staple on the music scene for fifteen years, the band from Charlottesville, Va., will play a set of its most beloved tracks and will introduce a new song or two. Opening for Matthews is Texas-based alternative country singer-songwriter Robert Earl Keen.

Steve Harvey’s tour may be called “The Fool Is Back,” but Harvey, (right), is anything but a fool. To many Queen City residents, he is the charismatic, entertaining syndicated morning talk-show host on WBAV 101.9 FM. To others he’s the beloved musician-turned-educator as depicted during his seven-year run in the TV comedy The Steve Harvey Show. Now, the multitalented star returns to his Original Kings of Comedy roots and brings a fresh, new stand-up routine to town.

Long-Running in the Park

September is a month of festivals in Charlotte, and the granddaddy of them all,
Festival in the Park, comes back for its forty-third appearance at Dilworth’s Freedom Park. The four-day event attracted more than 85,000 visitors last year, and there will likely be an equal turnout this year as artists from around the country set up shop to display their works. Also scheduled is an eclectic array of live music showcasing the Latin sounds of Peralta, the pop stylings of The Spongetones, and a performance by the Charlotte Children’s Choir.

This article appears in the September 2007 issue of Charlotte magazine.
Categories: Arts & Entertainment, Buzz > Best Bets
Contest of the Month