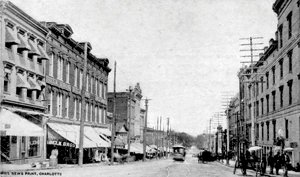 Never-ending growth is a major element of Charlotte’s municipal makeup, and historians note that the city has always hungered to become bigger and more important. Some claim this civic obsession with growth is a reaction to disparaging remarks made by George Washington, who visited the town in 1789 and proclaimed it “a trifling place.” The presidential rebuke stung.

In 1900, Charlotte edged past Raleigh to become the largest city in North Carolina, and eclipsed Charleston in 1930 to become the largest municipality in the two Carolinas. But the population figure didn’t reach 100,000 until 1940, and it took another twenty years to exceed 200,000. Thus, Charlotte’s big-city status is a relatively modern occurrence, with its population more than doubling since 1980.

When the census figure reached 200,878 in 1960, City Manager William J. Veeder called it “a magic figure.” He added, “Wisely husbanded, its offshoot will be real civic progress.”

The Charlotte News, however, offered a more measured appraisal. In an editorial, the News wrote, “Charlotteans need not be reminded that bigger does not always mean better. Urban America is littered with the corpses of once proud, pleasant small towns whose life-force vanished with growth because growth was never disciplined and never channeled properly.”

With Charlotte’s 2007 population estimated at 664,343 and city/county population nearing a million and continuing to soar, it might be wise to focus on the concluding paragraph of that 1960 editorial: “In the last resort, cities are raised to greatness by a spirit—always difficult to touch but as old as the wandering Athenians and Romans who believed that their city was the center point of the world. And it was.”

This article appears in the September 2007 issue of Charlotte magazine.
Categories: Buzz > History
Contest of the Month