I grew up in the North Carolina Piedmont, the first child born to a postwar romance. My father was a handsome football-playing college student, in his mid-twenties and on the G.I. Bill when he met my mother. A former Marine, he captured my mother’s heart and imagination—she, a displaced Yankee come south for college. Seventeen and straight from a boarding school in Poughkeepsie, she had her own car, smoked, and was adored by the only two males in her life: her daddy and her boxer. 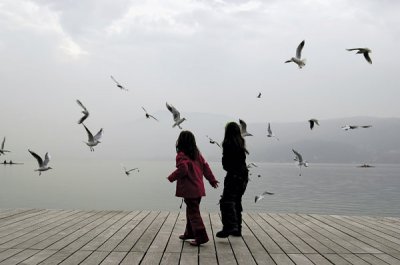 Kids these days have lots of problems, including one big one: They don’t get outside enough.

I grew up in the North Carolina Piedmont, the first child born to a postwar romance. My father was a handsome football-playing college student, in his mid-twenties and on the G.I. Bill when he met my mother. A former Marine, he captured my mother’s heart and imagination—she, a displaced Yankee come south for college. Seventeen and straight from a boarding school in Poughkeepsie, she had her own car, smoked, and was adored by the only two males in her life: her daddy and her boxer.

My parents hammered out the American dream on a big piece of land in a turn-of-the-century farmhouse. They remodeled it (my mother persuaded Sears to sponsor them as part of a magazine feature), rented out land to tenant farmers while my father ran his own business, and grew a family. By the time I was six I was climbing up the metal steps of a yellow school bus in a crisply pressed cotton dress to make the long ride to a county elementary school. On many a hot afternoon I sat by the window looking for cows, for houses hugging the shade of great oak trees, for creeks that marked the bends and curves of the endless road, for gas stations, and for sandy stretches of pine trees. Back home were two sisters and a baby brother.

During my years in elementary school, I endured the grinding hours at a hard wooden desk made for right-handed people, not left handed, as I was. Hot days passed with open windows—no one had air conditioning back then. I often got through those miserable hours by watching flocks of birds over the playground. Masses of them flew together, moving like dust storms across the hard clay yard. They’d sweep up, turn in a single movement, fall like rain, then right themselves in a new direction. Silver wings spread out into a sky of glitter or disappeared into filaments. Their constantly changing flight pattern made the monotony of classroom drills bearable.

Like the margins on my ruled paper, the birds beyond the window gave me space. They showed me a place not bound by right-handed desks and perfectly lined sheets of paper. When I looked out the window, I felt room to breathe. Out there, I had recess. Out there, I got to get on the bus and go home. As much as I loved the social climate of school—and regularly got called down for too much socializing—the slow pace of learning was a bore. The big white clock above the blackboard dragged its hands through the hours like a child trying to walk through waist-high water. But in the sky beyond the window, time raced by. It was a margin I needed.

I wonder what kinds of margins kids have these days. Two years ago, during a panel discussion of Nobel laureates at The Westin Charlotte, I heard a simple observation that astonished me. Christiane Nüsslein-Volhard, a German scientist who won a Nobel prize in 1995 for medicine, and the other panelists were in town as guests of the Echo Foundation, a local organization that promotes a world-citizen view of justice and dignity. She observed that our children are so isolated from the natural world that they cannot name the birds they see. They don’t know the names of trees. She was deeply concerned about how disconnected they are from the thriving environment that sustains them.

The bird they know best may be Big Bird, and their most familiar neighbors may live on Sesame Street.

I’m concerned, too. I’m not advocating a return to the past, but we had lots of room in the margins in those days. We watched too much TV, but then, the days came with more time. TV was a rest stop between riding the horses, walking the farm roads, damming up the creek, or riding a bike for three miles to get a candy bar. Summer lasted for months, real months that weren’t chopped up. People didn’t work on Sundays. Most folks took care of their own yards on Saturdays. And we knew the birds. Cardinals were everywhere, blue jays taught us that all things colorful are not always nice, and great owls roosted in the high eaves of the barn. We were connected to the outdoors in practical ways, whether through feeling summer’s heat or by eating warm tomatoes straight from the vine. People knew the Earth, at least, more than they do now. Nature was a big margin.

I see lots of articles about why there is so much depression and obesity among today’s youth. In 2002 Debra Terrell, a professor at UNC Charlotte, published results of her research on obese children in the November/December issue of the North Carolina Medical Journal. Terrell visited middle schools in Cabarrus County (home of Lowe’s Motor Speedway) and discovered that not only were kids fat, but they were significantly fatter than the national average (32.4 percent were overweight compared to 22 percent nationally, and 16.4 percent were obese compared to 11 percent nationally).

It seems like half the kids I know are on medication for something. The theories are complicated. Is it the breakup of the family? Is it day care? Is it too much fast food? Are the schools too far away or too impersonal? Is it too much visual stimulation? Is it a lack of self-esteem? My theory is simple—if kids were outside more, they’d feel better. They’re too connected to stuff that isn’t alive. Kids are living in their heads too much, and not through their five senses. Can it really provide a margin for a group of boys to plug in to a box and play electronic games for three, four, and five hours at a time? I’m not pointing fingers—as a single mom, I was guilty of caving in to this. A lot happens in our homes by default—it’s so hard to muster the mental energy to think of creative alternatives. It’s so hard to resist “But Mom . . .”

How are we going to fix this?

Maybe our kids could calm down if they had more experiences in the natural world. Maybe it starts with us.

One afternoon last summer, I was wrestling with a problem. Eventually I wandered out into our backyard and got into the hammock. As I stretched out across the Pawleys Island ropes and stared up at the sky through the limbs of the trees, I began to notice the birds. Watching them flit about in the branches soon had me listening, and the more I listened, the more I heard. I closed my eyes, to concentrate. I began to hear songs coming from other yards, and the more I strained to listen, the more I began to pick up faint traces of songs far away. There were layers and layers of bird songs; it was like the night I stood in the warm sand of the Outer Banks and saw the stars. I’d never seen so many stars. Now, I had never heard so many songs.

I calmed down. Although I didn’t intend for this to happen—I was just trying to sort things out—it turned out that giving my attention to the “rhythm of life,” to borrow Sir George Martin’s phrase, had a mysterious effect. My problem didn’t seem as bad, and a swing in the hammock turned out to be a lot better for me than I anticipated. Maybe even as good as a candy bar. Make that several.

Laurie Prince is a Charlotte writer. Her column, “Life Lines,” appears on these pages every other month. Feedback: editor@charlottemagazine.com

This article appears in the August 2007 issue of Charlotte magazine.