Boardroom Socks Pairs with Roof Above to Distribute Socks This Winter

Last year, Boardroom Socks CEO Nathan James noticed something unusual at the Granite Falls warehouse where his company’s high-end dress socks are manufactured. “I see, kind of in the corner, just a giant pile of our merchandise,” he says. The warehouse staff told him those were “seconds”—socks they couldn’t sell because they were slightly flawed. They had accumulated for several years. “I mean, it’s thousands of pairs of socks,” James says. “Looking at that, I was like, OK, we’ve got to find a good home for these.”

James reached out to Roof Above, a homeless outreach organization that serves more than 1,000 people per day through street outreach, day services, and emergency shelter and housing assistance. They were thrilled to accept his donation. The nonprofit has since been able to distribute the cotton and merino wool socks to hundreds of the community members who need them most.

Now, when James visits the warehouse, he grabs as many boxes of socks as he can and brings them home to Charlotte. “My wife and I sort through them and pair them together,” he says, “and make sure that they’re all wearable and good to go.” He then boxes them up and delivers them to Roof Above’s Day Services Center on North College Street. So far, he’s donated more than 2,500 pairs. James was shocked at how fast Roof Above distributed them.

“We go through a heck of a lot of socks,” says Randall Hitt, vice president of unsheltered services there. “We have both our Day Services Center and we have shelters for men that can shelter more than 500 people a night, so socks are one of those basic essential needs that we really want to be able to have as often as we can.”

Socks, humble as they seem, are critical, especially in winter. Feet and hands are major components of our built-in thermostats: They have specialized blood vessels, low muscle mass, and a large surface area, which means they cool off quickly. Cold toes make for a cold body—and a cold body can curse our efforts to accomplish just about anything.

“If you’re donating a pair of socks, you are contributing to someone’s life in a very meaningful way that assists them with where they are,” Hitt says. “I don’t think people can appreciate sometimes what a good pair of clean socks can be to someone who may spend 60% to 70% of their time outside and half of their time on their feet.” 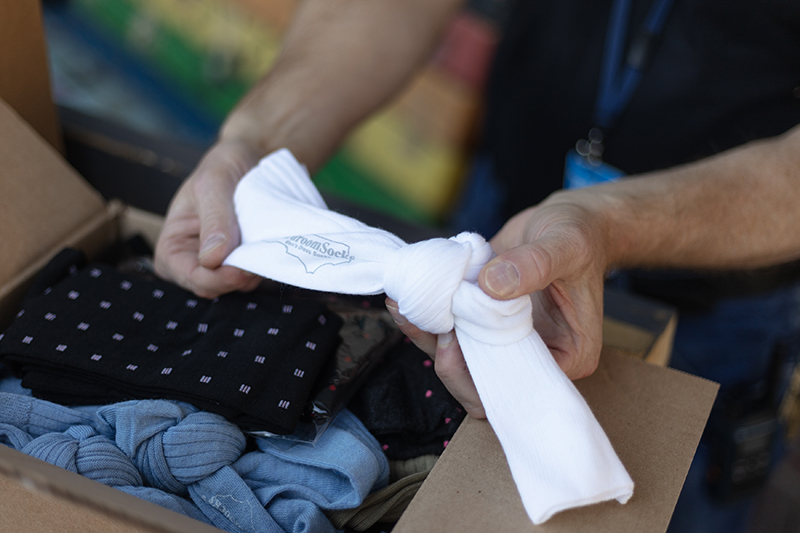 “People are coming to us for some very basic things that you and I might not think a thing of,” Hitt says. “Like underwear, like socks, getting aspirin somewhere, having lunch, getting their mail somewhere. These are things that someone experiencing homelessness has to navigate in a much different way than most people.”

Hitt says he will always welcome donations from those who want to emulate James, but he hopes dropping off a six-pack of socks would be just the first step in a more profound engagement. “Challenge yourself to look a little bit deeper,” he says. “Because for us, we know housing is the ultimate solution. But we also know there are other issues around people being able to live and sustain themselves.”

James cites Tent City, an encampment that sprung up near uptown during the pandemic, as a highly visible reminder of an issue that typically skirts public notice. But when the tents came down, homelessness rates didn’t. As of September 2022, more than 3,100 people in Charlotte were experiencing homelessness, including more than 300 families, 130 unaccompanied youth, and 220 veterans. That’s more than during the first months of the pandemic.

County officials believe this approach will allow them to address the entire multifaceted problem, rather than isolated components such as veteran or youth homelessness. Whether the comprehensive plan, with its focus on collaboration, will succeed where decades of similar city initiatives have failed remains to be seen.

In the meantime, the folks in Hitt’s sphere at Roof Above know how to appreciate good fortune, big or small. “Because if you’re constantly down that losing path,” he says, “and you can’t hang your ‘win’ column on something, it might be like, Well, you know what? I got my pair of socks.”

ALLISON BRADEN is a contributing editor.