Our daughters are getting implants and going commando. Maybe they’re just following our lead 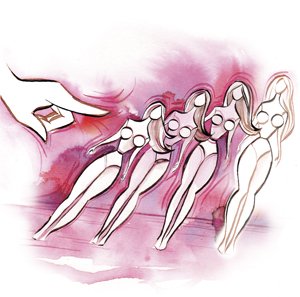 At a recent party, a certain guest attracted attention due to an extraordinary change in the size of her breasts.  I tried not to stare, but it was hard to resist, because this woman, wearing a body-hugging, see-through, low-cut dress, frequently availed herself of opportunities to lean over. Because I have sketched so many nude women in art classes, carefully studying bone structure and the smooth sweep of skin covering layers of muscles, I could see the faint outline of the implants just below the surface of her skin.

This caused me to think, once again, about the messages women of my generation—the baby boomers—are sending our daughters. We’re getting boob jobs, wearing thongs, and plying science for the fountain of youth. Appearances have never been more important. This makes sense when you consider our history: as teenagers we wore miniskirts, paraded around braless, and acted nonchalant when the topless bathing suit was introduced. (I remember when my boyfriend’s father, who managed a high-end women’s boutique, ordered one for the shop.) It was an era of throwing off restraint and being proud of it. We assumed we could look however we pleased, and became accustomed to saying what we wanted. How has this affected our daughters?

As I look at our young women, I wonder if the self-actualization and liberation of the 1960s and 1970s have gone off track. I’ve heard of moms taking their daughters to plastic surgeons to give them bigger breasts as birthday presents! What kind of a message is that? As more of our daughters struggle to fit into the image-oriented culture we have created, staying tan year round (if they’re white) and dressing in cleavage-focused designer clothes, the pressure mounts. Fears over gaining weight are intense. Sadly, it’s no longer a shock for me to be in a restaurant bathroom and to hear someone in a stall gagging. “Are you all right?” I’ll call out over the stall door. When a friend confided that her thirteen-year-old daughter gave away her virginity at a parent-chaperoned party, I felt her grief. Where will this take us? Carolita Johnson sketched a cartoon for The New Yorker that gives a preview. Two curvy, bikini-clad women frolic in the surf as one says to the other, “I never thought turning eighty would be so much fun!”

During the summer, the parade of artificial bodies is especially apparent. One year at a water park, as I stood in line with my teenage son, I stared in disbelief at the grapefruit-shaped orbs projecting from the woman’s chest in front of us. I felt shame for her, and looked away. I wondered what my son thought. There are so many women with breast implants now that when I call to schedule my annual mammogram the receptionist asks, “Do you have implants?” She doesn’t ask for my name or health insurance policy, but skips straight ahead to what sort of technical difficulty I might present. “No implants,” I reply. I’m tossed into the easy pile.

A March press release from the American Society for Aesthetic Plastic Surgery notes that bigger breasts have become the number-one cosmetic surgical procedure, topping liposuction for the first time. The society’s president was quoted as saying “changes in fashion, i.e., décolletage-baring styles, might be a factor behind this change.” Excuse me? Fashion gives us plunging necklines and we run to a surgeon to put alien objects into our bodies? It’s not just women who have fallen for this. According to 2008 statistics from the American Society of Plastic Surgeons, pectoral implants for men shot up 203 percent from 2007—despite the economy. More than 300,000 women had breast augmentations in 2008, up 45 percent from 2000. Six thousand had cheek implants; 740 had buttock implants.

Our young women are also not being taught to leave something to the imagination. I’ll never forget the day I called a close friend, shocked by a couple of young women I had just seen wearing see-through white pants with no underwear. Did they have any idea of the effect this had on their male peers? Did they have so little respect for themselves? “Oh, Laurie,” she sighed. “Haven’t you heard about that? It’s called ‘going commando.’ Lots of girls do it.” Where were their mothers, I wondered? Why wasn’t someone saying, “Young lady, you can march yourself right back upstairs and change.” What are my peers thinking?

I once went on a women’s retreat directed by author and psychotherapist Paula D’Arcy. Meeting in the Montreat home of a longtime North Carolina family, we went through thought-provoking exercises. We were well prepared. Walking along nearby mountain paths and quiet neighborhood streets in Billy Graham’s hometown, we were in a good frame of mind to think a little more carefully about things.

One of the exercises changed my life. As we sat in a large circle, Paula began passing pages torn from current fashion magazines. The room was quiet and we were simply asked to study the pictures. Page after page passed, and I began to feel uncomfortable. The repetition of the images and their emerging message were unsettling, and I felt queasy. No one warned me about this. The faces became interchangeable and the clothes, jewelry, contorted poses, and blank stares became a language repeating the same message: get this. Strangely, it seemed as though we had stepped behind the camera, into the mind of the photographer, for the glossy pictures told us nothing about the model, but much about the eyes behind the lens. Worse, the more we looked, the more we felt like collaborators. We participated, by extension, in the will and direction of the photographer. It was icy prostitution.

We sat in utter silence.

Then came the photos, black and white, of ordinary women. The relief was intense. Some were old, with deeply lined faces. Others beamed crooked-tooth smiles. Not all were American. Each face was different, and just as fascinating was each woman’s posture. These women held themselves with dignity; their direct gazes were not blank but natural, warm, and open. I found myself thinking, “I would like to know her.” They had power. They had respect. They had culture. They had intelligence. They had humor. I couldn’t imagine them getting on the scale and freaking out over gaining two pounds. I couldn’t imagine them sticking their fingers down their throats and throwing up a delicious meal to stay thin. They struck me as women who might enjoy life a little too much. “Another latte, please. We’re not finished talking.”

It’s not my intent to unfairly single out those who fall into booby traps. Lord knows there is enough blame to go around for all of us. Who hasn’t spent too much money on clothes? Too much time looking in the mirror? Wasted time fretting over a bad hair day? Plopped down money on a skin-care cream or vitamin that promised the moon? We’re all guilty of lapses in judgment. But we need a few heroes. We need women who will show us a better way, who will question the artificial reality that is shoved in our faces. Women who will question the onslaught of perfection that hammers away at our collective self-esteem. Our daughters need these heroes, even more than we do.

My mother died of breast cancer in her forties. She once pulled up her blouse to show me her flat chest after a radical mastectomy, a brutal scar leering across her empty, forlorn ribs. I didn’t know what to say—I wish I had thrown my arms around her and cried. In those days, it was hard to talk about things that were so painfully private. I learned early on that these lovely members of a woman’s anatomy were mere flesh, prone to disease and mortality like the rest of the frail tents we inhabit. My mother’s realistic view of life, her classic sense of style, and her complete disinterest in drawing the attention of men—although she was strikingly attractive—have had a lasting effect on my sense of womanliness. She respected herself. It was not the beauty of her décolletage that defined her, but what lay underneath, her heart.

And of that I say, the bigger the better.

This article appears in the August 2009 issue of Charlotte magazine.
Categories: Life Lines, Opinion, The Buzz
Contest of the Month