NEW BARS, breweries, and everything in between have been opening up across Charlotte lately. We couldn’t include all of the newest spots, but here are five you should try. 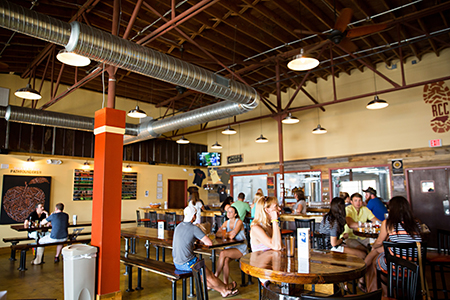 Red Clay Ciderworks
Charlotte’s first and only cidery, Red Clay has become a haven for gluten-free Charlotteans. Along with its ciders, Red Clay also has blackberry and apple wines, both made from North Carolina fruit. 245 Clanton Rd., 980-498-0676

Free Range Brewing
This NoDa brewpub is proud to say it was started by two brothers who like to infuse their beers with flavors such as fig, thyme, or ginger. Free Range has made a point of including works by local artists on its walls. 2320 N. Davidson St., 980-201-9096

The Cellar at Duckworth’s
Tiny and tucked beneath Duckworth’s main bar in uptown, this new gastropub feels like a prohibition-era speakeasy. And with merit—the building it’s in was built in 1912. Come dressed in Roaring ’20s attire and have some fun. 330 N. Tryon St., 980-349- 4078

This article appears in the October 2015 issue of Charlotte magazine.
Categories: Beer, By Jared Misner, In Print