Bringing the Inside Out

The Beck family built their dream home in Seven Eagles, but it's their outdoor living space that they love the most 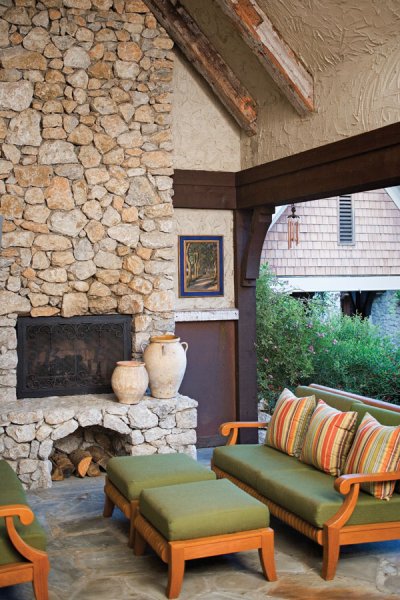 A sitting area furnished with antique French accessories, Smith & Hawken furniture, an outdoor hearth and fireplace, and a 47-inch LCD TV is perfect for entertaining or relaxing.

When you’re in a backyard that has a waterfall, hot tub, pool, four grills, two Japanese cooktops, 47-inch LCD TV, deep fryer, steamer, putting green, oh, and an 800-pound smoker, you have to wonder why’d you ever go indoors.

With two French doors leading from the elegant living room, your first glimpse of Lynn and Skipper Beck’s outdoor living space is of a pool that blends so seamlessly with the landscape you’d think the house itself had been built around the water feature. That, the Becks say, is what they wanted for the overall landscape—a backyard that flows from the indoors out. “It’s a unique landscape,” says Lynn, who remembers the pool inspector surveying the land before they broke ground on the house. “The pool was designed before the house was even built.”

Skipper, who is president and CEO of Beck Imports of the Carolinas and a principal of the Beck Automotive Group, and his wife, Lynn, moved into their dream French country-inspired home in Seven Eagle’s private community (adjacent to Quail Hollow Club) in March 2001 after two and a half years of planning and construction. When the house was complete, the result was not only a stunning 9,000-square-foot space, but also a transitional outdoor living area that easily flowed from the home’s interior, perfect for the couple who entertains year-round.

“We wanted the yard to be an extension of the home,” says Skipper. “Too many times you walk into a backyard and there’s no coordination between the indoors and outdoors.” The Becks, with the help of David Simonini Custom Homes and Christopher Phelps & Associates, created a design that ensured all aspects of the property worked hand in hand. The stone, shipped in from Oklahoma for the house and from New York for the pool house, was mixed with copper-clad windows from Canada and authentic old barn siding, giving the home a country-cool ambience similar to the home’s interior.

As you enter the space from the Becks’ sitting room, you’re greeted by the soothing sound of running water from the pool. Adjacent to the indoor gourmet kitchen is a covered patio with a modest sitting area staffed with a grill, table, and chairs for smaller gatherings. Close by, a six-foot waterfall cascades out of a hot tub and into the heated pool while a stone stairway leads up to the pool house area where the artwork, furniture, and accessories reflect Lynn’s love of French décor. She has also chosen more than seventy-five varieties of antique roses that bloom unrestricted, some reaching as high as the two-story home. Lynn turns to local expert Fred Bettin to care for the roses, which add not only an amazing burst of color through the spring, summer, and fall but also a sweet fragrance.

While Lynn had the final say on décor, Skipper, the family’s designated food connoisseur, made his mark on the backyard with two Thermador and two Viking grills, two Japanese teppanyaki cooktops, a LCD TV, a deep fryer, and a steamer. Accenting a substantial wine cooler and refrigerator are slate countertops as well as a sleek granite island. For those summer parties when all baths in the main house are occupied, a copper-lined shower functions as yet another changing area for guests. Hidden around the back of the pool house is an overhead-lit putting green and Skipper’s pièce de résistance, a smoker the size of a Mercedes SLK. The custom-built smoker can handle 300 to 500 pounds of meat, enough to feed the guests at one of the Becks’ larger affairs.

Though perfect for entertaining adults, the backyard is inviting to even the most discriminating of tastes—the coming-of-age teen. Before leaving home for The Conservatory of  Dramatic Writing at Purchase College in New York, their oldest son, Brandon, nineteen, held cast parties by the pool after Charlotte Latin school plays. Skipper and Lynn now find their fifteen-year-old son, Graham, entertaining just as many friends in the pool.

“There’s nothing better than sitting in the sun while the kids are in the pool,” says Lynn, who also uses the backyard as a forum for various fundraising events.

For now, though, the backyard—with its spacious grounds, well-appointed outdoor living areas, and gourmet appliances to throw parties ranging from 100-guest fundraisers to smaller family dinners—suits the Becks so well that they, too, wonder why you’d ever want to go inside.

This article appears in the Home & Garden July 2007 issue of Home + Garden.
Contest of the Month