Unlike couples who can’t agree on the features they want in a new home, Jason and Elizabeth Burgess had a shared wish list: an open floor plan with five bedrooms, a relaxed vibe, and enough space to entertain large groups indoors and out.

“Our dream was to have a bigger home, a place where people could come over and we’d feel comfortable, not crammed,” explains Elizabeth Burgess.

The catch: The couple wanted to find a home in Dilworth, where they’d been living for 11 years.

When the Burgesses started looking for a new home for their family of five in 2010, none of the houses on the market met their criteria. There was just one home for sale on their street—and it belonged to their next-door neighbor. Although the location was perfect, the home, which was old and small, was not. Elizabeth Burgess calls the house “a teardown.”

After months of searching, the couple decided to purchase the neighboring home, take advantage of the oversized lot, and build their dream home. With an accepted offer and their neighbor’s blessing, demolition started in 2011. It took 18 months to complete the project.

Architect Harry Schrader of Schrader Design and Knight Residential Group helped bring their vision to life. The home has an open floor plan, five bedrooms, five-and-a-half bathrooms, a finished basement, and an outdoor living space complete with a pool and basketball court.

The Burgesses wanted a warm and inviting space for entertaining, but the couple had no idea how to achieve that feeling through design.

“We wanted it to be modern and clean but not stark and sterile,” says Elizabeth Burgess. 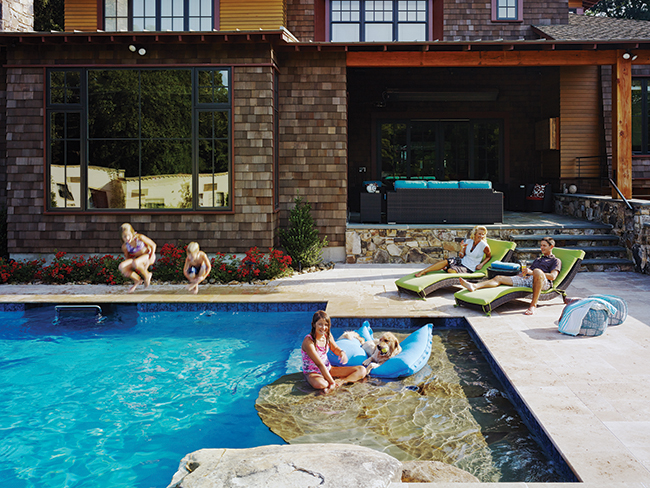 The Burgesses wanted a home that would become the neighborhood kids’ hangout. With a pool, basketball court, and plenty of space for entertaining, their new Dilworth home definitely meets that requirement.

While Schrader took ownership of the architectural elements in the Dilworth home, designer Tom Holley of Crazy Jane’s stepped in to curate the interior.

“Harry and Tom would say, ‘What do you think?’ and we’d say, “What do you think?” Elizabeth Burgess recalls. “We let them make most of the decisions, and we love everything they chose for our home.”

The foyer offers the first glimpse of the modern architectural elements, textures, and creative blend of materials used throughout the house. Dark mahogany panels line a feature wall; to give the space a modern feel, the panels were installed horizontally and manipulated to form gentle curves that flow toward the great room. The large glass front doors are another modern touch, and the light flowing through the space helps balance the dark wood tones. Click the arrow to continue reading the story.

To unite the rooms, materials were repeated throughout the house, including bamboo floors and stacked stone on the fireplace and the feature wall in the dining room; decorative elements that blend industrial design with natural materials were chosen for the great room. These choices helped create a cohesive feel on the main floor. 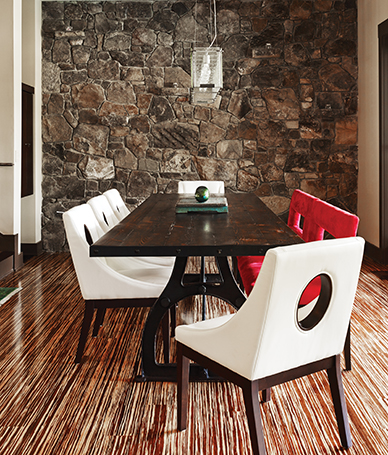 To give the open floor plan a united feel, designer Tom Holley repeated many materials throughout, including striking bamboo floors and stacked stone accents.

An open living space was a must in their custom home. Both Jason and Elizabeth come from large families and love to host get-togethers. Since it’s not uncommon for their guest list to top 30, a space that could accommodate a crowd was high on their wish list.

Designed for entertaining, the kitchen includes features such as a performance range and custom hood, built-in steamer and warming drawer, prep sink and bar cabinet with a refrigerated drawer, and coffee station all set against a backdrop of custom cabinets and marble and limestone countertops. The large island separates the kitchen from the living and dining rooms while providing additional seating space.

The great room is the heart of the home. A television hides behind custom cabinets, and a large sectional sofa offers enough space for the family of five to curl up for a movie or relax in front of the stacked stone fireplace. Holley chose interior finishes that make the home feel both luxe and lived-in, including a console table made from repurposed railway ties and a recycled and overdyed rug. 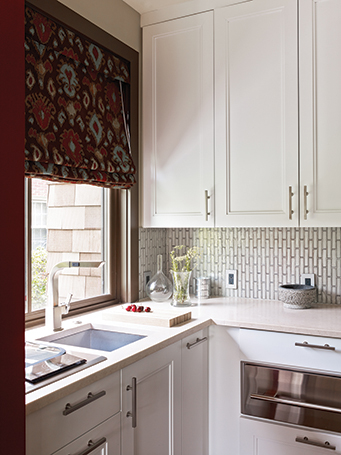 Intended for entertaining, the kitchen was designed with marble and limestone countertops and custom cabinetry.

Although the decorative elements are attention-grabbers, the real conversation piece is the wall of windows that overlooks the backyard and offers skyline views of uptown.

“It makes you feel like you’re outdoors even when you’re inside,” Elizabeth Burgess says.

With chartreuse walls, turquoise ceilings, and orange accents, the children’s rooms are much brighter than the rest of the house. The Burgesses encouraged their kids—Chandler, Kylie, and Shade—to take part in the decorating decisions. At 6 years old, Shade is the youngest member of the Burgess family but had very specific ideas of how he wanted his new room to look.

“He wanted his room to be black and red,” Elizabeth Burgess recalls.

A custom cowhide headboard and footboard provide texture and a touch of youthful whimsy, while red bedding and a sleek red chair add color. A stainless-steel vintage dental cart serves as a nightstand.

At night, he looks out his windows at the Bank of America building and makes up elaborate stories about the colors of the lights in the crown.

Despite the colorful décor and custom touches, the Burgess kids don’t spend much time in their rooms. Instead, they play video games in the daylight basement, shoot hoops on the outdoor basketball court, or practice cannonballs in the pool—and it’s not uncommon for their friends to join the fun.

“We wanted a place where all of the neighborhood kids wanted to come and hang out, and we got it,” says Elizabeth Burgess.

In the process, the couple also got the home of their dreams.

“Even though I had no idea how all of the pieces would come together, it’s exactly the way I pictured it,” she says.

This article appears in the September 2013 issue of Home + Garden.
Categories: Home & GardenFeature, Spaces
Contest of the Month