SITTING AMID a row of bungalows, the historic Helms-Bell House emerges like an illustration in a pop-up book: Pink phlox and green gooseneck loosestrife grow waist-high in the garden bed along the worn brick walkway leading up to the Victorian home. A pink crape myrtle overlooks the left side of the home, while on the right side, dark rose vines snake through a trellis, unleashing a multitude of green leaves. 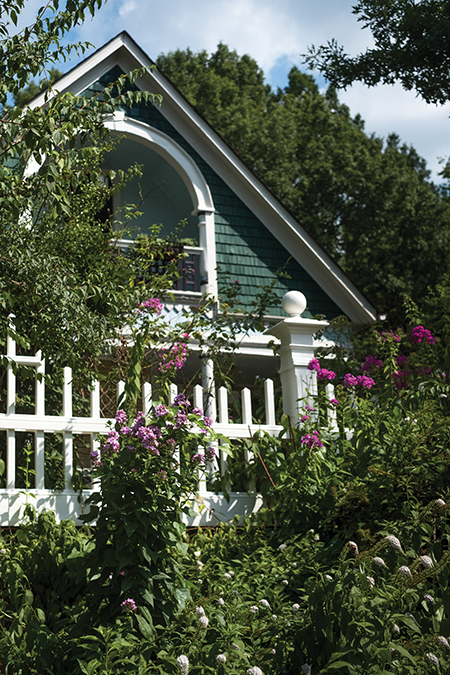 Allen Brooks bought a historic home set for demolition and relocated it to a lot in Dilworth. To complement the home, Brooks planted time-appropriate gardens around it.

The inspiration for these plants is the house itself, a local historic landmark built in 1899 off of Morehead Street, near the present-day Dowd YMCA. Allen Brooks, an architect who specializes in historic preservation, bought it in 1998, after learning of its impending demolition. He then purchased this lot on Euclid Avenue in Dilworth and moved the Helms-Bell House here, joining it to the existing ranch house on the site.

“The house is over 100 feet in length. It doesn’t leave too much room for a garden,” Brooks says. So he built four, one on each side of the house. Brooks intended for each to be unique, but all are historically relevant, meaning each small landscape could have existed in 1899.

Walking along the left of the house toward the backyard, Brooks passes hydrangeas and herbs. He stops in front of an overgrown bay tree and grabs a jutting branch, then breaks it off. “Smell,” he says, bringing the sweet aroma closer to his nose.

Stopping in the backyard, Brooks recalls how it looked in 1998: a square plot of red clay covered in kudzu. When Brooks removed the invasive species, he discovered a trove of junkyard treasures he had to lug away, including a car. To create nutrient-rich soil, Brooks mixed compost into the red clay, which also helped level out the sloping landscape.

He used so much, he jokes, “Everything I put down grows!” 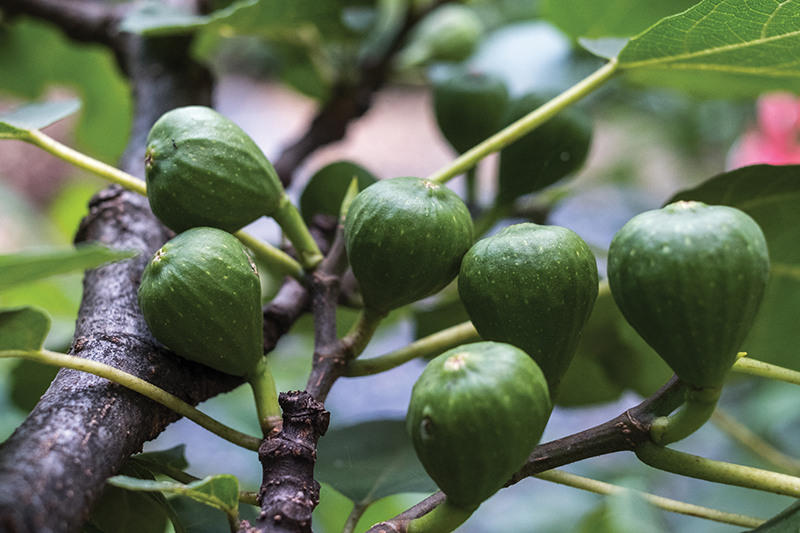 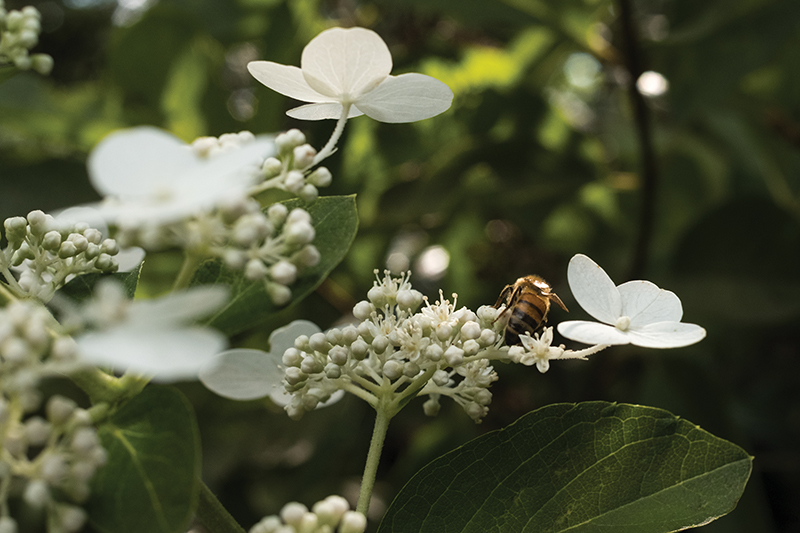 The dark green leaves and near-ripe fruit from a fig tree hide the ranch-style house that Brooks adjoined to the historic one he moved to the lot. 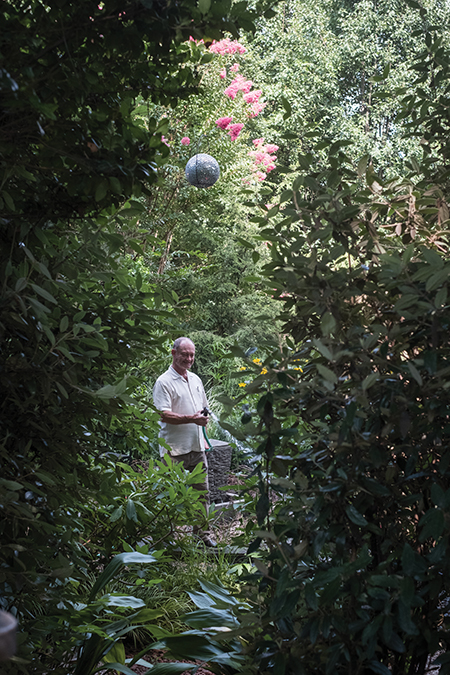 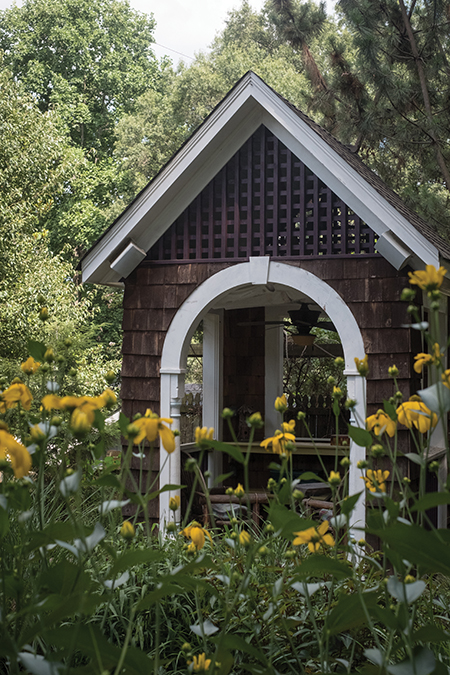 Top: Brooks created pathways that lead you different places in the gardens. Each path should lead you to a discovery, he says. Bottom: A water feature adds a soundtrack for relaxation in the gazebo, which Brooks often enjoys with his dog, Carley.

Drawing on his architectural background, Brooks utilized geometric patterns and maximized space to avoid the feeling of being boxed in. “I hate it when you have a backyard and you think of it as a confinement,” he says.

The base of the backyard is a gravel circle comprised of geometric patterns made from different colored stones, creating a pattern like a dart board, with a soapstone fire pit as the bull’s eye.

At the top of the circle stands a massive fig tree, dotted with near-ripe fruit. The dark green leaves completely mask the one-story ranch house behind it. “This is kind of an oasis, an escape where you don’t realize you’re in the middle of the city,” Brooks says. “Very lush, mature, exuberant.”

At the base of the gravel circle rests a small gazebo where Brooks often sits with Carley, his cairn terrier and schnauzer mix. Brooks always wanted a water feature, so he surrounded the gazebo with a rippling pond, the dark water now spotted with bright green lily pads and spiky papyrus.

Multiple paths run from the base of the gazebo footbridge, another intentional use of geometry.

“You never want to funnel in,” Brooks explains. “Instead, it’s a discovery.”

As Brooks makes his way to the front yard, he passes the small garden to the right of the house. A sago palm stands with a gang of bright orange cannis, aspidistra, and acanthus leaves around it, the same leaves often carved into Corinthian columns.

The leaves lead all the way up to the swatch of zoysia grass in the front yard—a green, fuzzy carpet Brooks has used to play croquet.

Nearing the front porch, Brooks quickly spots the last bud amid the gardenias planted there. Like the gardenias, the snowball bush and irises flower each spring. “Every season is a different experience, a different character,” Brooks says.

During summer, the tiger lilies and phlox emerge in full color. The pink camellias will have their turn in fall.

Looking over his shoulder at the Helms-Bell House behind him, Brooks says the house is what makes the garden work—and the garden enhances the house, too.

“One makes the other,” he says. “If you just have a house with foundation plants around it and the rest is just grass, you’re missing a lot of opportunities to create outdoor spaces, and they’re just as important as the inside.” Pausing to touch the nearby Miss Kim lilac, he adds, “(Gardens) make porches relevant; they make pathways to something relevant.”

This article appears in the September 2017 issue of Home + Garden.
Categories: Outdoor Living