Building a Home from Afar

IN THE MONTHS when Lori and Mike Hughes’ new build in The Club at Longview was under construction, Lori would fly from Chicago to Charlotte to meet with designer Amanda Swaringen of Carolina Design Associates. Mike, whose job brought the couple here, was often in Charlotte for work, but Lori remained in their former home. So when Swaringen had time with her clients in Charlotte, she made sure she used it efficiently. 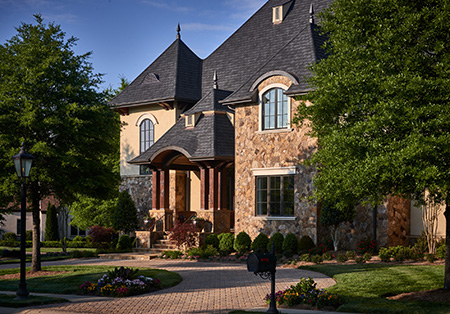 “Amanda would have two days planned,” Lori says of her visits here. “We would go from the tile place to the guy who was going to do the fireplace. …  She would have everything lined up, have appointments so we would come in, we would meet, and make decisions.”

To find the necessary new pieces for the home, Swaringen went to the furniture market at High Point and picked out potential pieces. Once she knew where to direct them among the mass of vendors, the Hugheses came with her to High Point to sit on each couch and pick out furniture that went with their vision.

“We wanted it upscale, but also comfortable and homelike,” Mike says. “That’s what we tried to capture.” 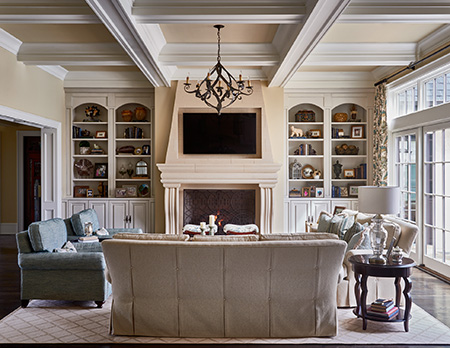 Lori and Mike Hughes wanted a home with lots of natural light. Twelve-foot ceilings in the family room allowed for larger windows.

Swaringen also traveled to their home in Chicago, photographing and measuring existing furniture the couple wanted to bring. She found places for old and new furniture and artwork before the house was even complete. When all of the construction was finished, 18-wheelers traveled from Chicago to Charlotte with the old furniture. New furniture arrived. Everything was put in its spot, and within a week, the Hughes’ home was complete, down to the accessories on shelves.

The couple wanted their new home to be bright and open. Twelve-foot ceilings in the kitchen and family room, along with large windows, helped achieve that, and also allowed for more intricate trim work, a priority of Mike’s. Even the ceilings and cabinets were custom-designed by Swaringen, sketched out on paper and turned into architectural designs for the best fit in the home. 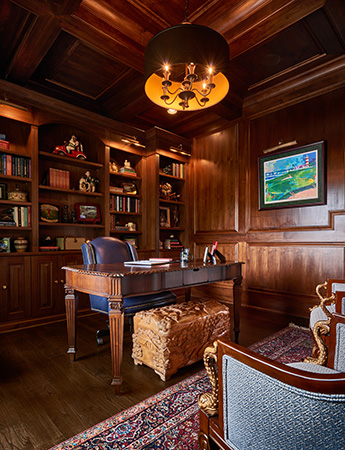 Mike’s office on the first floor is decorated with pieces from his international travels.

In the kitchen, Lori’s favorite room, Moritz Bronze-finished light fixtures with tea-stained glass and hand-wrought iron from Corbett hang above a large center island. They were the first lights Swaringen found for the home, and the Hughes’ favorites.

“Lights can make or break it,” Swaringen says of the fixtures. Underneath the lights, the island and countertops are surfaced with leathered granite, adding more texture to the space.

The breakfast area and kitchen open into the family room. From the kitchen, you see the back of a sofa by Sherrill Furniture separating the spaces. But Swaringen found the sofa for a reason: It has a pleated back, adding visual interest. She recalls pulling the couch away from a wall in High Point to show Mike and Lori. The couch’s neutral, mini-diamond print is contrasted with pillows of cream and teal houndstooth.

To take advantage of their corner lot, the Hughes worked with builder Arcadia and architect Chris Phelps to create a U-shaped home, which afforded them more privacy. From the kitchen, you step outside onto a veranda, complete with a built-in grill, wetbar, TV, and fireplace. On one side, a door leads to a workout room, which blocks the veranda from street view. On the other is a pool and hot tub. A full bathroom has doors from both the terrace and the gym. But this isn’t even the most fun area of the house. 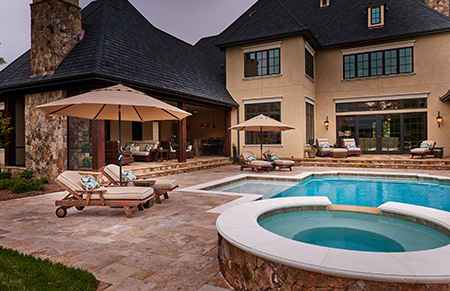 The home is U-shaped to take advantage of the Hughes’ corner lot. The three wings give privacy to the veranda and pool by Charlotte Pool and Spa.

Upstairs, Swaringen created a pub feel in a room with a large TV, couches, a pool table, and a large wooden bar. Above the pool table are customized copper ceiling tiles from American Tin Ceilings, and the ceiling is slightly lower to achieve a bar-like feel. The room opens into an in-home theater with tiered seating, decorated with signed sports jerseys that Mike has collected, including one signed by Wayne Gretzky. Also upstairs are bedrooms for the couple’s two daughters: Jordan, who is about to start graduate school at Johns Hopkins University, and Taylor, who is in school at the University of Miami. 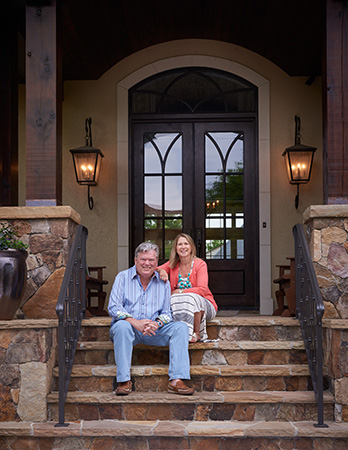 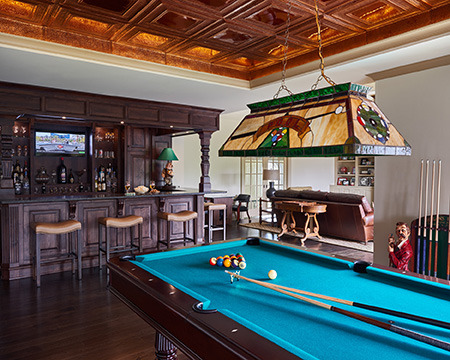 Above: Mike and Lori Hughes sit on the front steps of their home.
Below: Mike says the bar area upstairs gets the most attention from visitors.

Connecting the two levels is a curved staircase, a change from the original plans that included a square stair tower. From the staircase, you can look down into the foyer, which includes one of the few touches Swaringen had to convince the Hughes to add: teal wallpaper from the Thibaut Gatehouse Collection, framed to match the home’s trim. Benches sit underneath the wall panels.

“When you have big walls like that, you have to do something with it,” Swaringen explains. It’s a touch that Mike and Lori now love.

As their home came together, the Hughes praised the ability of the designer, architect, and builder to work together—and the strength of the team they had—to make the process as easy as possible.

“Chris Phelps is a fantastic architect; his portfolio is all kinds of beautiful homes,” Mike says. “(From Arcadia,) Mike Salamone and George Pippin, project manager—this guy was world-class. All of the tradespeople loved working with this guy.”

But it was their designer who helped make the most of the team—even when her clients weren’t there.

“I could not have done it by myself, I’m sure, not being here,” Lori says. “But she made it as simple as the process could be.”