The South’s first female physician was a true pioneer 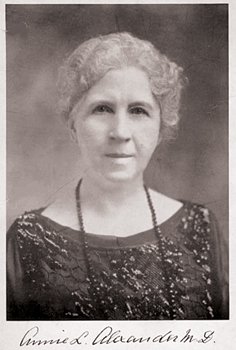 Alexander, circa 1910 courtesy of PLCMC

Her name has faded in the mists of history, but in the early twentieth century few Charlotteans were as well known or respected as Dr. Annie Lowrie Alexander.

Although medicine was considered an improper field for women, Alexander followed in her physician father's footsteps and graduated from Women’s Medical College in Philadelphia in 1884. She was teaching at a medical college in Maryland when she heard of a Charlotte woman who had died because she was too embarrassed to have a male doctor examine her.

The woman's death inspired Alexander to return to Charlotte, where she became the first licensed female physician in the South. However, most would-be patients were reluctant to visit a female physician, and it took her a full year to earn $2 from her practice. Described as a gentle woman of great ability, Alexander drove herself around the county in a horse and buggy to call on her patients and, in time, her reputation and practice grew.

Alexander enjoyed a long and distinguished career, serving several terms as president of the Mecklenburg County Medical Society. She served on the staffs of St. Peter's Hospital (now Carolinas Medical Center) and Presbyterian Hospital and was physician for Queens College for twenty-three years. During World War I, she became a first lieutenant in the Army and served as a surgeon at Charlotte's Camp Greene.

Alexander died in 1929 after she contracted pneumonia while treating a patient. She is buried in Charlotte’s Elmwood Cemetery.
As noted in The Charlotte-Mecklenburg Story, "In an age when opportunities for women were extremely limited, Annie Lowrie Alexander made a place in history."

This article appears in the November 2007 issue of Charlotte magazine.
Categories: Buzz > History
Contest of the Month