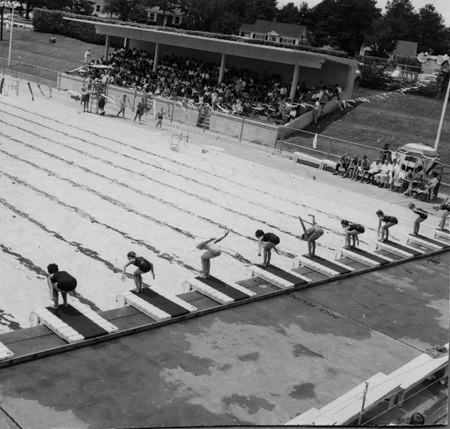 Carroll Thomas grew up in Charlotte’s Revolution Park neighborhood during the civil rights movement and is a retired banker still living in Charlotte.

Back when I was a kid, Charlotte was a very segregated city. McDowell Street was the closest African American area to downtown, and there was a big black concentration in north Charlotte, too.

But in my neighborhood, Revolution Park, it was nothing but whites. That was just the era I was born into. Don’t think that meant my neighborhood was wealthy, though. No, it was middle class at best. My upbringing was humble. We didn’t have cars or much pocket money. No one living in Revolution Park did, really. Still, Charlotte was vibrant then. As a teen, I probably couldn’t have told you what that meant, but I felt it, and Revolution Park was certainly one of those vibrant places.

There was a public pool there that served as the main meeting place for the youth of the neighborhood—we couldn’t afford to get around much, so hanging around that pool was all we had to do.  Even in the winter, that pool is where we’d meet up. And the pool was right next to a golf course, which we used to sneak onto after it closed at night and play six or seven holes. That’s where I learned to swing a club.

And that’s where I watched Charles Sifford, who would go on to become a very famous golfer [born in Charlotte, Sifford was the first African American to compete on the PGA Tour]. This was before desegregation, and Sifford was only about 21 years old, and he’d come to the course with another black guy on the off-season. It was a private club, and someone obviously wanted them there, so they couldn’t be denied. We’d gather around to watch, and seeing those two figures out on that green was an amazing thing, but not only for the reason you’d think. Not just because they were black—it was a sight to behold because they were the most incredible golfers. They were legendary, and when they were playing, that was the only thing we talked about. Looking back, I guess it was the first indication that change could and would come to Revolution Park. At the time, though, it was simply the way those two played that awed me.

Years later, Revolution Park would become the site of a lawsuit to end park segregation—that was in 1951. The transition at the pool was more subtle. And eventually the neighborhood would turn from white to mixed. Now, it’s almost entirely made up of black residents. —As told to Melissa Hankins