THE CROWD at the airfield continued to swell. The weather was pleasantly clear and warm for an early summer day in 1947, and people in the gathering multitude were well-appointed for such a highly anticipated event. The men sported collared shirts and brimmed hats, and the women donned their best dresses for the outdoor affair.

Everyone was there that June afternoon, along the runway of Charlotte’s Plaza Airport, to take in an air show, a growing American pastime just 40 years after the first flight took place on the dunes of Kill Devil Hills a few hundred miles east. The use of fighter jets during World War II enhanced the mystique of flight and anticipation for the air show was high. 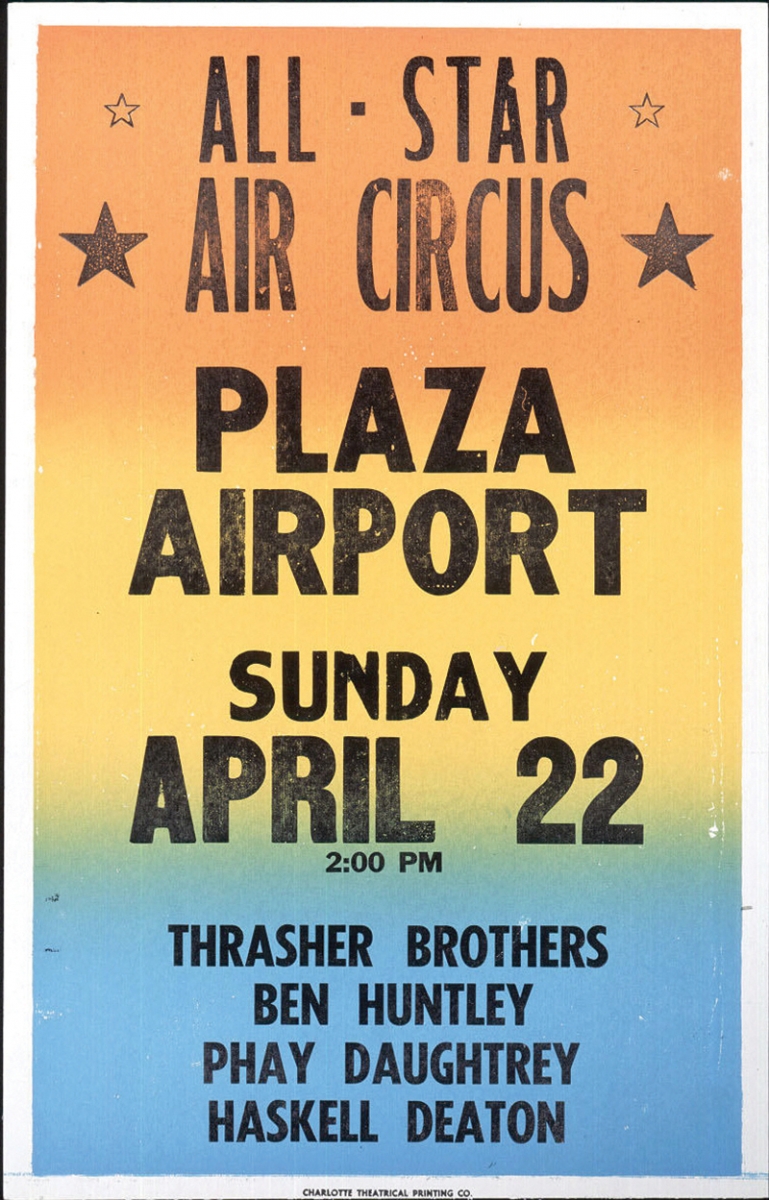 One of the posters that was used to promote a similar All-Star Air Circus event in 1945.

Attendees flocked from across the region to Plaza Airport, a flat and expansive private airfield. There were at least 15,000 spectators—maybe 30,000, if you believe some estimates, a stunning draw for a city of just 100,000 residents. Visitors lined up beside the landing strip along The Plaza, near what are now the tree-lined streets and the low-slung brick ranch houses of the Plaza-Shamrock neighborhood. Before all that, though, the area was home to one of Charlotte’s regional airports, with seven hangars, two landing strips, 35 planes, and a flying school. By comparison, Douglas Airport, which had been a pilot training center during the war, was again a commercial airport with three landing strips and open air spaces for “plane parking.”

In the mid-1940s, entertainment in Charlotte was almost entirely segregated—large-scale entertainment for African-Americans was typically limited to baseball games, concerts, and church events. But the owner of Plaza Airport, a 30-year-old white ventriloquist and pilot named Haskell Deaton, organized this air show specifically for black spectators to attend, though all were welcome. The State magazine later described it as “the first all-Negro air show in the South—and perhaps the nation.”

Deaton was eccentric, with a curious habit of mailing unsolicited pictures and stories to the Charlotte Observer of his aviation-related adventures. In addition to owning the Plaza Airport, Deaton organized air shows throughout the South, often designating himself as the master of ceremonies. Deaton was also a pilot, despite his large frame, and once landed a plane on North Tryon Street, taxied south into the city along the main thoroughfare to the Carolina Theater, parked the aircraft out front, slid a nickel in the meter to avoid being towed, and walked inside.

With the air show, Deaton sought to create an event that would attract black spectators from surrounding areas by coordinating buses to the airfield and arranging to donate a portion of ticket sales to the Charlotte Negro YWCA and YMCA. He secured guests of honor who were major public figures in the postwar South. Pilots Charlie Foxx and Charlie Flowers, members of the celebrated Tuskegee Airmen, all African-American, flew in the show—upside down, at that. The show had enough hype in the region that Paramount Pictures sent a film crew to create a newsreel of the air show to be played in movie houses throughout the Southeast.

The show—with its aerial acrobatics and crowd of thousands—was an unequivocal success. That doesn’t mean it went off without a hitch. The program included a parachute jump by what the Observer referred to as “a beginner who risked his neck for the first time.” He missed the landing spot and wound up in the woods. But the crowd cheered anyway.

Plaza Airport’s coordinates (35.26, -80.76) show that the airport was located near Orr Industrial Court off of Orr Road near Plaza-Shamrock.

Charlotte has a remarkable history of flight, and the Carolinas Aviation Museum seeks to uncover more of it. This information about the Plaza Airport was discovered while museum staff members sifted through artifacts. If you have more information on the Plaza Airport, contact Casey Moore at casey@carolinasaviation.org. 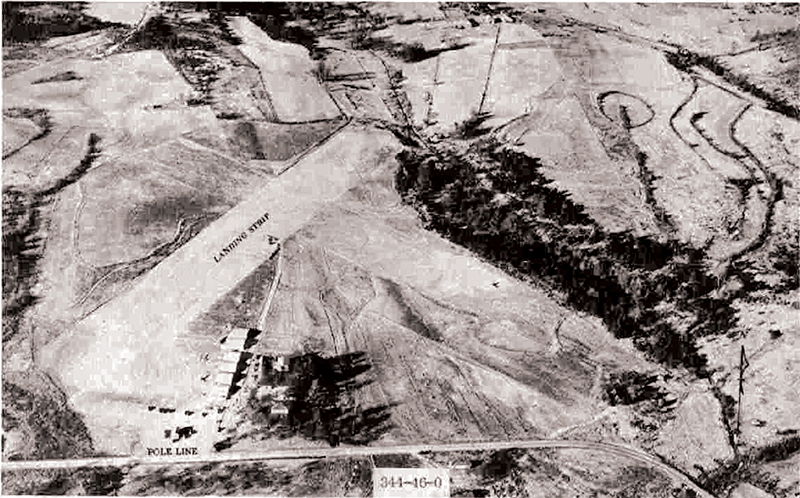 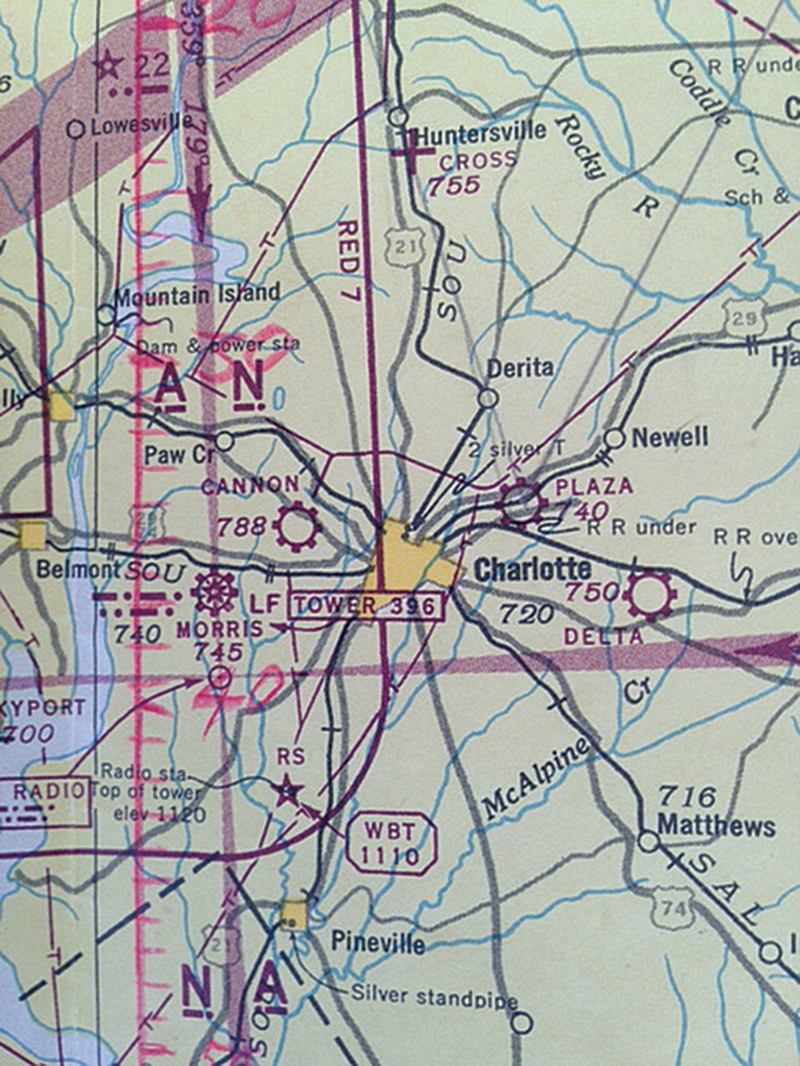 An aerial image (top) looking north at the Plaza Airport from a 1945 AAF Airfield Directory. The locations of Plaza Airport and Douglas Airport are listed on an aeronautical map from 1944 (above).

This article appears in the August 2018 issue of Charlotte magazine.
Categories: In Print, The Buzz
Contest of the Month