SOMETHING ABOUT TUESDAY NIGHT suggested, even insisted on, a permanent loss of innocence. For years, Charlotte has yearned for entry into the club of Major American Cities, and Tuesday night let it in, full force, a baptism by tear gas canisters and broken glass: police cars vandalized, at least 12 police officers injured, truckers and motorists terrorized on Interstate 85, a man brandishing a gun—or was it a book?—shot dead.

It was clear in the aftermath that this had been a long time coming. Charlotte has polished uptown, built light rail, thrown up a few thousand new apartment complexes and mixed-use developments for affluent newcomers—and encouraged, or at least acceded to, an economy in which it’s harder than in any other large American city to rise from poverty, and a public school system that in all the ways that matter has resegregated itself back to the 1960s. Does anyone really need to spell out what we all know, that the majority of people who have thrived in Boomtown Charlotte are moneyed and white, and the majority who have suffered in the other Charlotte are poor and black? “The whole damn system is guilty as hell,” a portion of the crowd of 300 or so, nearly all black, chanted in the dark on Old Concord Road on Tuesday night, and they weren’t wrong. 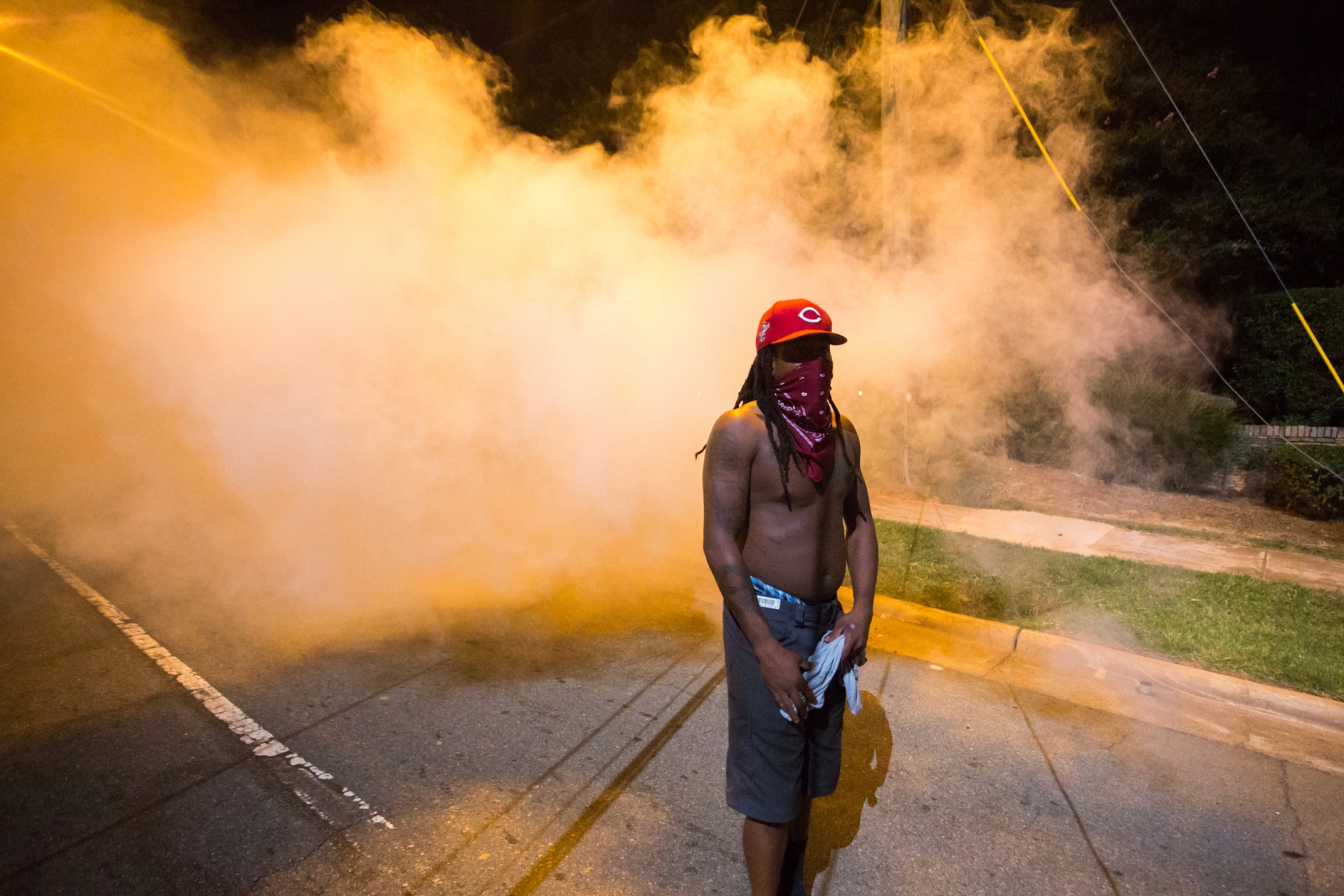 Protesters covered their mouths with anything they could find after police began to use tear gas.

HERE’S WHAT IT LOOKED LIKE. At 9:30 p.m., things were tense but not violent, not yet. A core group of about 60 protesters and neighbors stood nose-to-nose with a line of roughly 30 Charlotte-Mecklenburg police in riot gear. They spanned Old Concord at The Village at College Downs, the sprawling apartment complex where police say Officer Brentley Vinson shot and killed Keith Lamont Scott. The now-familiar chants spread through the crowd: “Black lives matter!” “No justice? No peace!” A few people added, “No racist police!” (Police had not yet confirmed that both Scott and Vinson are black.) Some others added their own spontaneous expressions to the mix as the cops in riot gear stood stone-faced.

“Put them fists up!”

“We’re not gonna take it no more. They done killed us too many times.”

A man drove a car behind the protest and cranked up the stereo system, blaring a track by the rapper Boosie Badazz, its chorus anchored by a line quickly picked up as another chant: “Wit’out dat badge, you a bitch-and-a-half nigga/Fuck da police! Fuck da police!” The protesters began pushing forward. The cops backtracked but held the line. The dance stopped after 100 feet. Things calmed a bit. Then people began taking the plastic bottles of water neighbors were distributing and using them as missiles—empty bottles first, then full ones. The bottles were tossed, then hurled, then, increasingly, fired. The cops still held the line.

The crowd began to move again. A few of the protesters had sticks now—big ones, three or four feet long and as thick as the fat ends of pool cues. “Where the bricks at?” a man remarked.  Another man, shirtless, with a blue bandanna around his mouth, tried to swipe a television news tripod, which a cameraman had left leaning against a tree. “Hey, hey!” the cameraman yelled, chasing after the thief with his camera on his shoulder.

The crowd began pushing forward again, seeping off the road and onto private property. The crowd grew edgier, restless. Gestures and words flew toward the blue line. As with most protests, it was impossible to tell who was there to exercise their First Amendment right to protest peacefully, who was there out of idle curiosity, and who just wanted to start some shit. “Get back!” yelled a woman through a bullhorn as the crowd again pushed forward. “This ain’t my first protest! They’re setting you up to get gassed!” 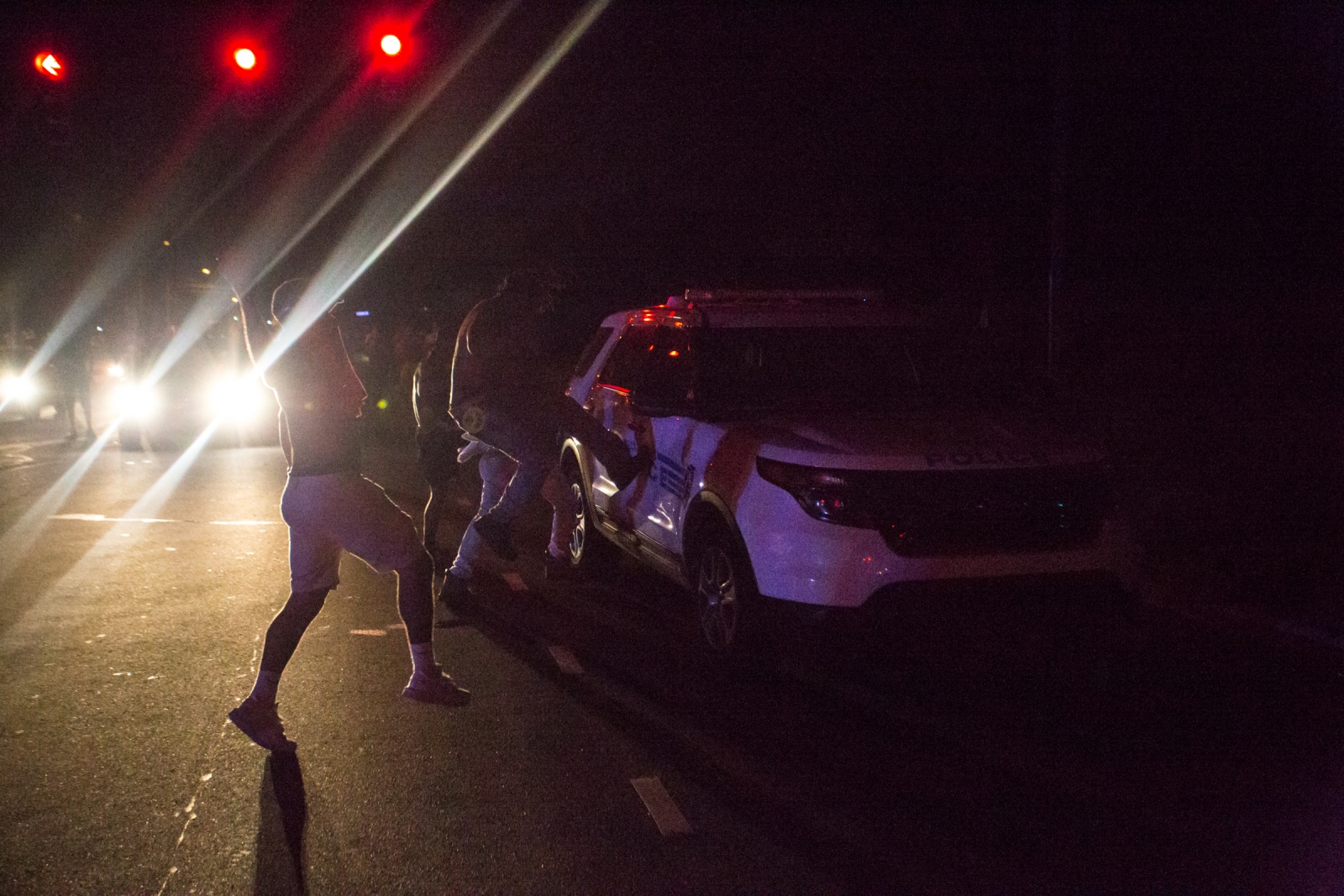 AND THEN THINGS GOT WORSE—far worse, with images not far removed from the scenes of civil disruption we’ve seen from cities like St. Louis, Detroit, and Los Angeles but never, until Tuesday night, in Charlotte. It’s not just disturbing; it’s heartbreaking. Since the police shootings over the summer in St. Paul and Baton Rouge, CMPD Chief Kerr Putney—a man who’s approached his own complex history in policing with uncommon candor, who’s reached out to minority communities in extraordinary ways—has arranged a series of intense community meetings to try to narrow the chasm between cops and the citizens they’re expected to serve.

One week before the killing of Keith Lamont Scott, Putney addressed a packed fellowship hall at Hickory Grove United Methodist Church, promising that the days of police failure to acknowledge their own brutal and racist past are over in Charlotte. The road to understanding is long and hard, he said, but he believes the destination will make the journey worthwhile. “You’re going to hear me talk about this a lot: There’s your truth and my truth, and then there’s the truth,” he told the group. “And a lot of people are looking at their personal experience, their truth, and taking it as the truth when that might not be totally accurate. So I want to see how we can take our truth and your truth and how we can meet halfway. … There is no ‘us and them.’ There’s just ‘we.’”

You could hardly ask for a more inspiring message from a chief of police in America in 2016. And in one night, I fear, whatever work Putney’s been able to do, whatever ground he and Charlotte have gained together—bang, gone, a sandcastle washed away in a wave of impulse and bad history.

So you can weep for Charlotte and Keith Lamont Scott this morning—for the city’s tarnished name, for whatever ignoble forces led to the pulled trigger and the chaotic and frightening response of Tuesday night—as you’ve shaken your head in despair over Ferguson, and St. Paul, and Baton Rouge, and Dallas, and for Sandra Bland and Eric Garner and Tamir Rice and Terence Crutcher, and Trayvon Martin, too. Does this ever end? Or is this just one more grotesque reality of a new and awful American life that we’ll all have to find some way to live with?

Greg Lacour is contributing editor to this magazine. Reach him at nestpoke@gmail.com or on Twitter: @greglacour.

This article appears in the September 2016 issue of Charlotte magazine.
Categories: By Greg Lacour, The Buzz