Forget what you think about hotel dining. The Dunhill's Monticello offers timeless appeal

For many a discerning diner, Monticello has long been a go-to choice for a solid pre-Blumenthal meal, a quiet business lunch, or a romantic date night. We've visited on and off over the years, too, but must confess to having been away for too long. 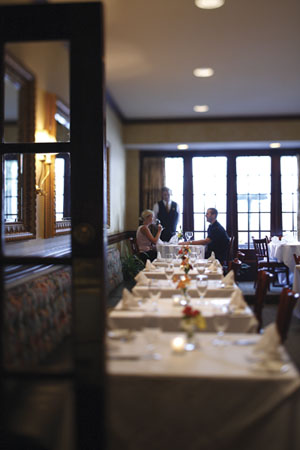 We're glad to say that some things, even in Charlotte's churning restaurant scene, never change. Monticello serves admirably as the hotel dining room for downtown's Dunhill, Charlotte's preeminent charming historic hotel. (It's also Charlotte's only charming historic hotel, but let's not put too fine a point on this.) The space befits the role. From the street, a wooden façade, fronted by a few café-style tables, gives way to a box-shaped dining room with high ceilings and a stately wooden staircase at the back. Two tables are perched on a platform in the expansive front window, which offers excellent people watching (on one night: two bachelorette parades, a pair of models, a pack of hormonally charged young men, dapper couples, and a stumbling bum taking it all in). Other tables line the walls and fill up the middle. It's a Manhattan-style space, where, because of expensive and scant real estate, restaurateurs routinely transform mundane rooms into memorable gathering spots. White tablecloths, a stately chair rail, and small paintings add elegance.

Over the years, Monticello's menu has gone through twists and turns as chefs have come and gone, as is often the case with hotel restaurants. The current iteration is a good one. It doesn't try to do too much, but it stays interesting. The theme is continental—that is, it would be if anyone still used that word—with Southern flair. A fleshy piece of red snapper ($26) comes adorned with a sweet maple beurre blanc and smoked mashed potatoes that actually taste smoked. Beef tenderloin ($33) is honorable, and a truffled shrimp, spinach, and fingerling potato hash with thyme-infused red wine is a worthy foil. Our server allowed that the bourbon-glazed pork tenderloin with cheddar cheese grits and braised collard greens ($20) is a favorite, as is the salmon stuffed with asparagus and Brie and served with bleu-cheese-and-bacon risotto and saffron beurre blanc, but each sounded too savory for a hot late-summer night. Count us in when it cools off.

At lunch, Monticello fills with quietly conferencing businesspeople. Light fills the space, and servers go about their duties with compunction. A Caribbean spice-rubbed salmon ($12) is a standout, as are salads, soups, and sandwiches, from the Buffalo chicken ($11) to the croissant club ($9). It doesn't hold the same romance as nighttime dining, but it makes you feel, as one companion put it, "like you are in New York City."But let's admit the real attraction here. Dining in a good hotel restaurant in your own city brings with it a romantic sense of the forbidden. This may be overtaxing the ol' imagination, but think Casablanca. (Although was that actually a hotel? Doesn't matter. The point is the romance!) And that's why we like Monticello. The room is elegant. The food is really good. The bar, which is in the lobby, isn't slammed with beautiful people. There's live music, and it's a fine place for a stiff nightcap. And, if the mood strikes, you can get a room. We recommend the penthouse. It has a fireplace.