Updated and remodeled, a classic New England saltbox is the setting for a remarkable antiques collection 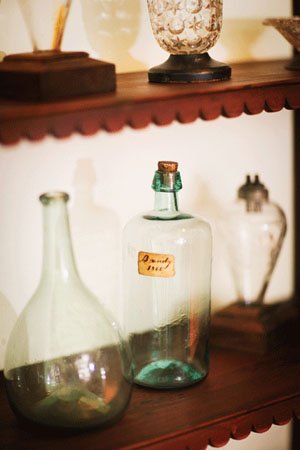 Stoker lines an open surface with items such as a flask, brandy bottle, and oil lamp, all made from mid-nineteenth-century blown glass.

Three years ago, Stroker saw the same kind of possibility in a Colonial-style house in SouthPark. She knew that it could be transformed into an ideal backdrop for her collection of American antiques, for many of the same reasons her business has flourished — chiefly, her talent for finding new uses for old things. It was a skill she learned from her parents, who assembled their own important collection of American antiques, one so extensive it was auctioned in fall 1987 at Sotheby’s, the famous London auction house.

The house, essentially a long wooden box situated amid mature woodland gardens with paths through azaleas and flowering dogwoods, was unusual for Charlotte. Built in 1974, it was modeled on a uniquely American design: the New England saltbox. These wood-framed houses are named for the sloping roofline that runs from a two-story front to a single story back and resembles the slanted lid of the boxes used to store salt in colonial times. The original owners fell in love with the style after touring a historic Massachusetts village. Struck by its simplicity, they hired a Charlotte architect to build them something similar.

In an era when brick homes were still being built with separate dining and living rooms, this structure had a single expansive great room, foreshadowing the later shift away from boxy design toward more casual, open floor plans. But the kitchen was outdated and there was no garage. Stroker and her husband, Jack, president of a SouthPark executive search firm, soon remedied that.

The house’s footprint was enlarged by adding a garage with a guest suite above it. Outside, a courtyard visually connects the addition to the house. The floor plan was reconfigured, flipping the existing kitchen and dining room so that the kitchen now flows into the great room. Open shelving displays Stroker’s collection of stoneware and yellowware, kitchen pottery from the early twentieth century. Existing rooms were converted into a new master bedroom, closet, and bath. Outside, a new deck and screened porch with high ceilings were added, and the plain clapboard façade was painted a colonial green with buttercream yellow trim.

The result is a rambling interpretation of one of America’s oldest architectural designs. Inside, Stroker’s antiques collection fits in well. With Windsor chairs, Chippendale mirrors, candle-stand tables, and American paintings scattered throughout, the house could be straight from the New England countryside. In the study, engravings of George Washington hang in a group over a set of art deco armchairs. A circa-1780 Chippendale mahogany looking glass hangs over a curly maple candle stand. The dining room’s centerpiece, surrounded by Windsor chairs, is an oak table Stroker’s grandparents once kept in their Minnesota cabin. A painting of the Hudson River Valley hangs on one wall; on another are stenciled and hand-painted Frakturs, documents made by Pennsylvania Germans in the early 1800s.

When Stroker’s parents decided to put up their collection for auction, they asked their three children to each pick one thing to keep. “I chose this,” she says, picking up a folk art watercolor of a girl. The portrait, from around 1825, is unsigned. It sits on a shelf in the great room, surrounded by what Stroker calls her “make-do” collection: pieces that were at one time broken and salvaged by making do with what was on hand: a somewhat primitive drinking glass with a wooden base, a ceramic pitcher with a metal handle. It’s the essence of the American spirit: a confident recasting of a problem into something useful.

On a nearby wall are two silhouettes by Auguste Edouart, a French artist who traveled throughout England and the United States during the first half of the nineteenth century. He created art by cutting silhouettes and placing them on hand-painted backgrounds with realistic details. The schoolteacher in an 1828 silhouette stands in a room that has a mouse hole in the baseboard; beneath this silhouette, a carefully painted library is the background for a silhouette of an English gentleman.

Stroker’s collection of antiques embraces the same diversity that her parents prized. A glass witch’s ball hangs above a window and nineteenth-century game boards ascend the staircase. Children’s toys appear on shelves, including a lithographed dollhouse with mica windows from the 1880s. Santas from Germany and Japan, with pipe-cleaner bodies and white cotton beards, line shelves populated by elves and little Christmas trees. An unusual collection of lamps is scattered throughout the house, ranging from nineteenth-century camphene lamps, which burned a highly combustible form of turpentine, to a 1930s beaded basket that gives light through a mound of amber grapes, blue and green pears, red berries, and black plums.

Back in the workroom, Stroker is working on a new type of flattened wine bottle for her company. This one has a wedding invitation instead of a label, and delicate flowers and ferns are pressed into the glass. With a pretty white ribbon tied at the top, it’s hard to believe this keepsake cheese board was once a plain glass bottle. But for Stroker, whose life is layered with collections and treasures from other eras, and who has remodeled and renovated homes, the new product is a natural development. She took a little history, pressed it into something modern, embellished it, and found a new use for it.