Bruce Robison may not be a household name, but more than likely you‘ve heard of the artists who‘ve sung his songs. The songwriter from Austin has penned hits like “Wrapped” for George Strait, “Angry All the Time” for Tim McGraw and Faith Hill, and “Travelin‘ Soldier” for the Dixie Chicks. 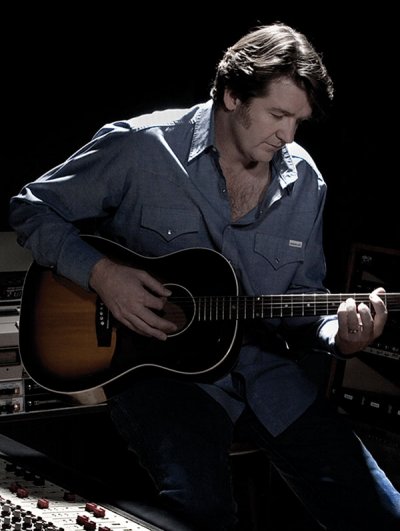 Bruce Robison may not be a household name, but more than likely you‘ve heard of the artists who‘ve sung his songs. The songwriter from Austin has penned hits like “Wrapped” for George Strait, “Angry All the Time” for Tim McGraw and Faith Hill, and “Travelin‘ Soldier” for the Dixie Chicks. But songwriting success hasn‘t gone to his head—standing at six feet seven inches, it would have a long way to go. Robison, who‘s married to country singer Kelly Willis, and whose brother Charlie is married to Emily Robison of the Dixie Chicks, is just another working guy doing what he loves. He‘ll be in town performing the songs everyone knows as well as songs he hopes you‘ll remember from his new album, It Came from San Antonio. See listing on page TK [MSOffice1] for details. —A. R.

You have quite the musical family.

We didn‘t grow up that way. We weren‘t the von Trapps. Charlie and I played in a little garage band, but we didn‘t sing. We didn‘t have aspirations. It was later in our twenties, we just fell into it and then we married musicians. It‘s kind of crazy.

Are you seeing musical inclinations in your kids?

They like music and we just open it up to them. That world is just opening up to us. We‘re trying to steer them to the Beatles and away from the TV. It‘s new and a lot of fun. My oldest wants to play the drums, and I want to discourage that. (Laughs)

I‘ve always been fascinated with the songwriting process. Which is easier for you, the music or the lyrics?

Well, country music is sort of simple steps. [Music and lyrics] go hand in hand. It‘s more often that a lyrical idea will start the creative process, but a melody idea will make a great song, if it has merit of course. The two go hand in hand and I‘m not a person that just does one or the other. Whenever there‘s a lyrical idea that I can pair a bit of music with it, and it all comes together to form a song, it feels like magic. Inspiration is something I can‘t make any sense of. It‘s like a lightning strike and is very random.

Where did you draw your inspiration for the Dixie Chicks‘ hit “Travelin‘ Soldier”?

That one I began writing in 1991. It was one of the first songs I wrote. It‘s just humanizing the idea and trying to get my mind around the idea of someone going off to war and not coming back. The things I‘d hear, and to this day the things I read about, what‘s going on in Iraq—it‘s just a kicker what‘s going on. Someone is losing a life. It‘s a simple song of compassion and humanity. It was relevant then and it is now.

What goes through your head when you hear a song you wrote on the radio?

No false modesty here. It‘s amazing. I won‘t ever get tired of it. Every time it‘s amazing. George Strait did a song of mine and he sang it on television and it was one of those moments in your career where you‘re slogging away and trying to get through to where it all lines up and it‘s just one of those things where you say, “That‘s what I‘m working for.” It‘s always a sublime experience. It‘s the great thing about my job.

This article appears in the August 2007 issue of Charlotte magazine.
Categories: Agenda > Conversation
Contest of the Month