Artistic director and company founder Glenn T. Griffin is the driving force behind The Queen City Theatre Company, which is wrapping up its inaugural season. Griffin, thirty-seven, came to Charlotte eight years ago after acting stints in New York and London to switch gears a bit and try…veterinary technology. But he decided to give theater another go, and we're glad he did. This month, Griffin directs the musical Side Show, which tells the sad but moving tale of conjoined twins Daisy and Violet Hilton. 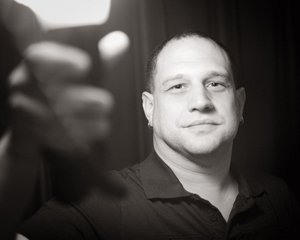 What has the last year been like with the Queen City Theatre Company?
We grew really fast. We had three great shows and it's been crazy and busy and exciting. It happened all at once and it's a lot of work, but it's also a lot of fun.

Do you still get the acting bug?
Every once in a while I like to act. I did Amadeus with [Central Piedmont Community College] a few years ago. It just depends on what sparks my interest.

Were you able to track down any information about the Hilton sisters?
I've been talking to a lot of people who knew them and have done a lot of research on the Internet and in books. It's really great to be doing this show in Charlotte. It's a piece of Charlotte history. You had these two people who were conjoined twins and great stars and lived here. They had a great but sad life, and more people should know their story.

How challenging is it to direct a play where the main characters are conjoined?
It's very difficult because the actors need to know each other well. They need to know what they're going to do and what they're thinking. They're two women (Alyson Lowe as Daisy Hilton and Sydney Shepherd as Violet Hilton), and they have to make the audience believe they're conjoined twins. There's one point in one song where they're arguing and they're trying to get away from each other and can't and you have to believe it.

What can audiences expect from this show?
The great thing about musicals is it allows the characters' emotions to sing. There was so much in their lives and so much in their quests for love, and Side Show has some of the most beautiful songs I've ever heard. They could sing about their joys and sorrows, and because of the time period and their career in vaudeville, there's some great vaudeville numbers too.

Read a profile of the Hilton sisters from our archives.

This article appears in the July 2008 issue of Charlotte magazine.
Categories: Agenda > Conversation
Contest of the Month