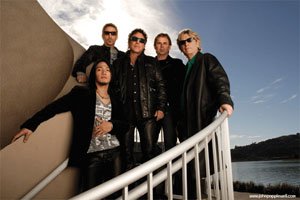 When you and Neal Schon began Journey back in 1973 did you ever think you'd still be recording and touring thirty-five years later?
We knew we had a future together. [But] it's hard to imagine that this many years later we'd still be doing this. We had several phases of the band's music and development and we're in the sixth phase right now. As every improvement happens it looks like we're going to be at it awhile. With Arnel [Pineda] now, it looks like we're seeing another beginning.

You mentioned the six phases Journey has gone through. Does that correspond to the six lead vocalists the band has had?
Sometimes it relates to personnel. Sometimes it relates to musical influences. We had Gregg Rolie before Steve Perry. And when Steve Perry joined we had a different sound. The phases have to do with changes in personnel and changes in musical direction and the writing and the successes of each of these phases. We've been on the road and done many, many tours. And the advent of Arnel Pineda is the latest phase. It's been quite a long ride and there have been many people involved, present or not.

It seems like Arnel has given a new life to Journey.
He's wonderful, and he has this talent to cover and represent the sound and singing style that made the band famous. He makes it his own, though. There were potentials of finding someone who sounded like Steve Perry, but Arnel is beyond that. He's settled and he knows himself. He's definitely breathed new life into the band.

So you found Arnel on YouTube. Really?
We were in negotiations with Wal-Mart for sole distributorship and they had an idea [of] what they wanted us to provide them, and they wanted the hits rerecorded. It was the eleventh hour and we were still searching for a vocalist to deliver. Neal was up late searching the Net. I don't know what he was searching for, but he ended up at YouTube listening to Arnel. Arnel's friend had posted forty performances of his band, the Zoo, which covered a great variety of music, not just Journey. So, Neal finds this incredible voice from the Philippines and contacted him, and Arnel thought it was a joke. But they finally spoke on the phone. Within a couple weeks all the proper paperwork for proper visas were settled, he came over, and it was a brief audition. The best way to describe the situation is "goose bumps."

On Revelation, you not only put out new tracks but rerecorded all the old hits. What was that like?
We thought "Gee, do we really want to do this?" With Arnel's arrival it was a piece of cake. We made sure the arrangements and parts were accurate in comparison to the originals. In many cases we tried to make some changes and went back and re-looked at our original parts because that's what worked best. We went through the trouble to make sure the new recording was the same.

Are you worried that there's a subset of your fans that won't like the new recordings?
There's always someone that won't like something. Sometimes fans don't like that we don't play certain songs versus other songs. There's other fans that don't like the singer. There's all kinds of room for critique but there's no cause for alarm. There's always that forum for a variety of opinions. In this case if there's any significant number of naysayers all they have to do is listen to [the new album] or come to a show and that percentage of people would reduce. The proof is in the pudding as they say.

Do you watch The Sopranos? What was your reaction to David Chase using "Don't Stop Believing" to close out the series?
I'm a Sopranos fan. We all knew that we had agreed to the request to use the song in the last episode. We had no idea it would be the last song you heard. It also happened to be the one year out of the last nine we didn't happen to be touring. It would have been nice to capitalize on it.

How did the deal with Wal-Mart for exclusive distribution come about?
We are associated with Wal-Mart through our management company. In having negotiated this deal with the Eagles as well we set a precedent for a very successful formula where we provide the production and there's no middleman. The record company has been somewhat eliminated, and they're not taking it too well. The New York Times article said that the middleman isn't needed with the advent of digital downloading, and the consumer gets a product that costs a lot less. It appears that everyone should be happy except the record companies. But a precedent has been set and artists can deal directly with their consumers and not have to jump through hoops. Case in point, you can get our three-disc album for less than $12.

You're touring with Heart and Cheap Trick this summer. What will that be like?
I think it's a perfect opportunity for them to be playing with a headliner of the same genre and audience base. We've always been particular about who we play with. We've been out with Styx, REO Speedwagon, and Foreigner, and now we've got two major acts with us. There's great musicianship and great singers. Our effort is to choose to work with bands with a similar fan base, and I think it's gonna be great!

Will there be any collaboration on stage or will each band play its own set?
I think there'll be some horsin' around.

What song do you enjoy playing the most? Is there one?
You know, that changes from day to day, tour to tour, or album to album. What we're all enjoying right now is the new-release material from the new album, “Change for the Better," “Never Walk Away," and “Where Did I Lose Your Love." We're playing quite a variety of songs from the past, but playing the new songs is exciting. I love playing “Mother, Father," from the Escape album. It's just a fun song to play. But the new stuff has my attention right now.