Or: A delusional rant from a superstitious Davidson Wildcats fan


At the start of the season, John Falconi was the winningest player in Davidson history. He walked on as a freshman in 2003 and stuck until he graduated. He witnessed the highs and lows of the Brendan Winters years and the dawn of the Stephen Curry era. He liked to refer to himself as the team's good luck charm, mainly because he never left the bench. 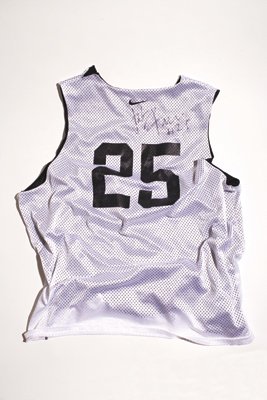 If Falconi was a rabbit's foot, I've been a broken mirror sitting under a ladder. Or a black wildcat wearing a No. 13 Davidson jersey. An owl in daylight. Spilled salt.

I was a year ahead of Falconi at Davidson. When I arrived in the fall of 2002, Peter Anderer and Wayne Bernard ran the show. I fell right in love with the Cats—anyone who could watch an Anderer fade-away three in crunch time and not do the same was dead on the inside. Or find that Bernard had beaten him to the library after slashing his way to another 25-point, game-winning performance at Belk Arena.

As sports editor, I covered games and was allowed into the office of Coach McKillop, a fellow Long Islander and Chaminade High School alum. A giant behind his big, wooden desk, he was always nice enough to treat me like a real reporter. That's how it goes in my memory, anyway.

The following season, I made my first trip to a college basketball game outside of Belk to see the team take on the Tar Heels at Charlotte Coliseum. They lost by 23. But they won the conference, so I made the journey to Charleston to see them off to the Big Dance. Instead, I got a second-round loss to East Tennessee State and their fat, obnoxious fans.

In 2004-05, it was Duke's turn to trump the Cats before my eyes in Charlotte Coliseum. The team went on to go undefeated in the SoCon, however, so my friends and I packed ten smelly bodies into a hotel room at the Chattanoogan in Tennessee. This time the second-round choke job came against UNC-Greensboro.

As a senior, I decided to spare myself the agony and enjoy spring break and didn't even bother trying to watch the title game from the beach. The Cats cruised to victory and earned another first-round shot at Ohio State. I watched them lose with a big crowd in the student union.

When I graduated, I went abroad for a year and lost touch with sports at home. Occasionally I'd be included on e-mail lists raving about a kid named Stephen Curry. I heard reports that a pack of pretty girls even followed him around campus. That gave me hope.

By the time I returned to Charlotte, the Cats had won the SoCon and set a school record for wins. I met up with a bunch of alumni at Picasso's for the Thursday-afternoon loss to Maryland.

Davidson played two big games at Bobcats Arena this year, which I witnessed in person: agonizing losses to UNC and Duke. Determined to break the curse, I ventured to UNC-Charlotte for what seemed a certain win. Then I tried an alumni gathering at Daddy's for the UCLA game. I watched the NC State loss from my couch.

I scheduled a vacation to California for the SoCon tournament and missed the blowout win over Georgia Southern in the final. I stayed away from the TV on selection Sunday, too, only to get a call from my roommate Jake that the draw was Gonzaga in Raleigh. So I guiltily bought a ticket over the Internet. I had no choice.

The night before the game, I tore through my closet. I came across a Chaminade practice jersey and threw it in my bag. But that wouldn't do it. Then I finally found the charm: a reversible No. 25 Davidson practice jersey, signed on the back by John Falconi himself one late weekend night of my senior spring, then forgotten.

Jake, who has been there with me for every loss but seen some big wins on his own (isolating me as the fated variable), threw on the jersey on Friday morning—black facing out, white underneath. We went through all the motions—camping chairs, cooler, Davidson basketball cups, mix tape—and left at 6:30 am for an alumni tailgate. We snuck bourbon into the stadium and bought cokes with cups of ice. We sat in the upper deck.

That old familiar feeling took hold early in the second half. The valiant effort story had long since lost its soothing effects. We glumly stuffed ourselves with Thickburgers as the at-least-we're-smarter-than-everyone-else grief session started in.

Then came the rally. And us screaming and banging the wall behind us and putting our hands on our heads in disbelief. The Lovedale rebound and Curry three-pointer. Missed high-fives and awkward man-hugs.

We basked in the parking lot for three hours after the game, our chairs parked behind the car, feet up on the cooler as the Bloodhound Gang blared through the speakers on the open doors: “You and me baby ain't nothin' but mammals…" Davidson weirdness all the way. Carolina fans pulled up and began to point and stare. We were getting noticed.

On Sunday, we made thick cheeseburgers at our apartment. I ate mine right away, but Jake waited. When the deficit reached fourteen and a TV timeout was called with fifteen minutes to go, he began digging furiously through my hamper. He came out wearing the crusty Falconi jersey, then sat down and ate his burger.

You don't always have to step onto the court to make a difference.

Mike Giglio, Davidson class of 2006, is a former Davidsonian sports editor and managing editor. He is an associate editor at The Sporting News and a regular contributor to Charlotte magazine.