Covering the Arrival of Air Force One

Wonder what it's like to be a member of the local media when the President's in town? Wonder no more.

There are maybe twenty of us crowded onto a solid but weathered platform on the airfield at the NC Air National Guard base off Billy Graham Parkway. We're media people: writers, editors, reporters, cameramen, photographers. Media junkies. And we're all packed in together on the platform with no railings to wait for the arrival of Air Force One and President Obama.

We've all been through the security shuffle, handing over IDs, fretting over credentials, having our bags searched, our bodies given the once-over by the security wand. We get special White House credentials. Mine has my full first name—which I hate—on it. For once, I don't care. In fact, I take a picture of it and post it to Instagram. I'm the only one who does.

Everyone else is cranky. We climb the stairs onto the platform, trying to eke out a good spot for viewing the action. People speak abrasively, plunking down tripods and TV cameras. We're like a pack of huskies sniffing out the alpha dogs. Once the hierarchy is settled and the positions are fixed, everyone relaxes. We're congenial, laughing. Reminiscing over previous conventions covered, talking about mutual acquaintances, trying not to appear overly eager or excited. (Or maybe that was just me.)

Then we hear that Air Force One has been delayed by bad weather in D.C. We clamber back down from the platform and head for the shade for a few precious moments. Here, the conversation turns to tomorrow night's events—and the venue change from Bank of America Stadium to the Time Warner Cable Arena. Those of us local media people ponder how residents with community credentials are taking the news. The non-locals don't seem to care.

The wind picks up. It's immediately apparent who the on-camera talent is. Even with a strong gust, their hair doesn't fall out of place. I'm pretty sure that mine is sticking straight up. (There's a reason I went into print media.) We all quietly hope the rain holds off until we get a glimpse at the Commander-in-Chief. Until we get our shots. Until we get something to write about other than that we're waiting for the President's arrival. Until we get something.

Friends and family of the Air National Guard begin to arrive. The President will greet them and shake their hands. He'll pat the toddling triplet boys on the heads (if they let him). He may even kiss a baby or two.

I'm pretty sure he won't look at us.

Then, one of us spots a blip in the sky.

Someone else confirms: "Yep, that's it."

A few of us grab our cameras and cell phones. Some people are still chatting.

They snap to attention. 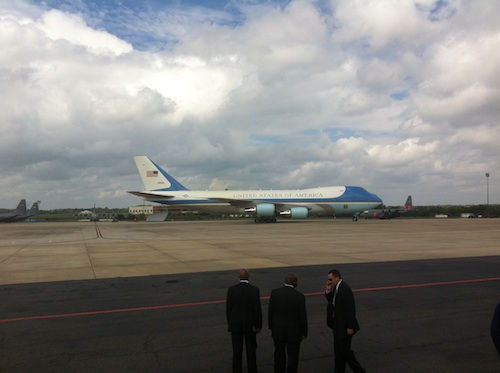 We film the plane's arrival. We snap photos of the massive plane, the exodus of media that have been traveling with the President, the motorcade that awaits, the cool, calm Secret Service agents. When the President arrives at the door, the crowd cheers. He waves.

He doesn't glance at the gaggle of us crowded onto the platform. Can't say I blame him, really. We don't have cute babies to squeeze or toddlers to pat. We just have pounds and pounds of decidedly un-cute cameras and cell phones and notepads and microphones.

We strain to watch him interact with the crowd, which he does for about half an hour. None of us can hear him over the roar of the plane's engines, but sometimes we hear the crowd laugh. He smiles a lot. At some point, we become part of the spectacle. As the President moves down the line, some of the guests turn to take pictures of us. I don't know whether to smile or look serious, so I alternate between the two.

Eventually, President Obama ducks into one of the limos with the impossibly thick security doors and drives away.

In an instant, we're seeking out the alpha dogs again. It's a frenzy to get interviews with the friends and family members who have gathered to meet the President.

"Did you get to shake his hand?" I ask two women. They're all smiles.

"Yes, we did!" says one. Her name is Dr. Nikki Jones, and she says shaking the President's hand was an emotional moment. Then she squeals.

One of the TV reporters steps directly in front of me and asks if he can ask her a few questions. He looks back at me and I swear he smirks. I roll my eyes and step back. I'm not here to get that story, anyway.

I watch the crowd. The TV reporters dance around one another, juggling the family interviews. They chase after one family with an attractive mother and cute, well-dressed kids.

I wander back to my car. None of the soldiers or security guards give me a second look.

I look at my hair in the rear view mirror. Just as I suspected, it's sticking straight up.