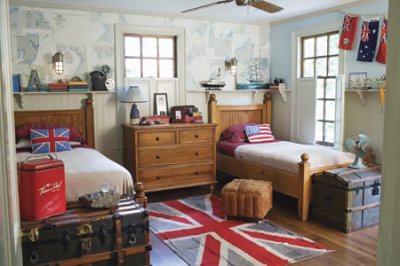 Lynn-Anne and Ken give each of their kids free range on bedroom decor. Son Alec chose a British-inspired nautical look, which went well with his collection of ship models. A British flag from Sleepy Poet Antique Mall serves as an area rug while Caroline and Lynn-Anne hung maps of maritime Scotland for wallpaper.

In the dining room of Lynn-Anne Bruns’s Foxcroft home, pretty French chairs—a find at $50 each—surround an inlaid Guy Chaddock table. The backs of the chairs are covered in luxurious blue silk from a Vermont boutique. However, the lawyer turned decorator cut costs on the seats: they’re covered in velvet from an extra drapery panel from a Pottery Barn outlet. One seat already bears the trace of her youngest child, Teddy. It’s been accidentally stamped in red.

This unexpected combination of thrift and elegance in a formal room—one that welcomes children—captures Bruns’s freewheeling style: one’s home should be a harbor of happiness and creativity. Since launching her business as a home stylist a little over a year ago, Bruns has learned that lots of other Charlotte mothers feel the same way. They’re looking for a collaborator to stage a home that is both practical and beautiful. “So many people were asking me to do things that I decided I might as well do it as a business,” she says.

Born in Scotland, Bruns has filled her home with shades of blue, a nod to the fair isle’s shores. Mirrors, chandeliers, and mirrored furniture amplify natural light, causing her favorite color to splash and sail throughout the Williamsburg-style home. But don’t get too used to it. The den is already in its second incarnation since a renovation in 2007; it was a happy pink before the current seaside blue.

Bruns is restless and creative, pulling out an endless supply of consignment shop and estate sale finds, rearranging, repainting, and reorganizing. Her American husband of almost twenty years, Ken—they married when he was twenty-one and she was twenty—has accepted the idea that when he heads out to his job running a manufacturing plant for Parker-Hannifin, he may return to a different house at night. His wife has glued wrapping paper to the lower walls of the hallway, taken metal lab stools to a car body shop to be painted, and rearranged a wall of art in a matter of hours. He may be drafted to install chandeliers—he has a degree in electrical engineering—or to build shelves, or pitch in with an impromptu design project. Since moving back to Charlotte in 2006, the entire family has taken part in transforming the house to make it distinctly their own.

Bruns’s uncanny sense of how things fit together keeps her eclectic approach from turning slipshod. She successfully mixes fine furnishings with for-the-people brands; her living room is a case in point. Elegant Barbara Barry sofas face each other, and beautiful mercury glass lamps rest atop mirrored end tables from Target. Seashells, blue jars, and painted picture frames from salvaged wood tramp through her spaces with a playful insouciance; an enormous open clamshell fills the fireplace.

A former lawyer for children’s rights, Bruns realized one night that her career was keeping her from what she loved most—her own family. “I came home one night and realized I hadn’t seen my two sons awake in a month.” She eventually left her practice to spend more time with her husband and children, a change that gave her the chance to develop her quirky ability to convert castoffs to new uses.

When people kept returning to her California home during a benefit home tour, she wondered if she should start taking herself more seriously. “All of my college roommates were in design or architecture,” she remembers. “That should have told me something.” She started taking courses, but soon found herself so tied up helping friends that getting another degree drifted to the back burner.

Lynn-Anne and Ken have four children, ages four to sixteen (three sons and a daughter), and their home’s camplike environment is often the magnet that turns friends into clients. The house is filled with fun, not the virtual kind, but the hands-on kind that existed generations ago. There are stacks of board games, hundreds of books, bunnies in the backyard, chalkboard walls in unimaginable spaces (like the downstairs bathroom), magnetic walls, and a six-foot-high Tartan-covered corkboard for photographic displays. “I believe you should create as many spaces as possible for creativity for children,” she says.

The house bursts with economic ingenuity, often seen in recycled objects. A Sears Craftsman tool chest, on casters, serves as one son’s bedside table, and school lockers make an ad hoc coat closet by the main door. A Texaco star from a gas station is lit with Christmas lights and hangs over a son’s bed. In another son’s room, the wall behind mismatched twin beds is papered with sailing charts. Between the windows are sailing flags bought from a man in Florida who had sailed around the world.

The kids often buy their own things, and Lynn-Anne and Ken are teaching them how to own and operate a business. The family has a booth at BLACKLION named for their Scottish terrier, Fergus. Picking up second-hand furnishings and accessories from local consignment shops, the kids paint, embellish, and recast objects into a new life. A steady seller has been old printer’s trays filled with seashells and hung as wall art (they look like specimen boxes). Ten-year-old daughter Caroline has taken the entrepreneur’s life to an even higher level—she has her own shop on Etsy.com, a popular Web site for artists. Her inventory of vintage lunch boxes is scattered along bookshelves in the family room.

Amid UPS deliveries, Lynn-Anne schedules a paint job for some lockers. When she learned that Myers Park Hardware, a landmark store, was going out of business, she bought the employee lockers out of a back room. They’ll be taken to a car shop and powder coated for a client—yet another example of an unexpected bargain. “I can think of something to do with everything—that’s my problem,” she says. Adjusting a soft pink pashmina around her shoulders and smoothing back her blonde ponytail, she pauses to reflect on a question Teddy asked this morning: what’s behind the rainbow? She didn’t know what to say, but she’s pleased.

He’s already thinking about the possibilities.

For the winter 2009 issue of this magazine, Laurie Prince wrote about life’s sweetest treat: chocolate.

This article appears in the Home & Garden April 2009 issue of Home + Garden.
Contest of the Month